The summer movie season is starting to wind down and while there have been some big films like Avengers: Infinity War and Mission: Impossible- Fallout, there is a film no “bigger” than The Meg.

The summer movie season is starting to wind down and while there have been some big films like Avengers: Infinity War and Mission: Impossible- Fallout, there is a film no “bigger” than The Meg.

The story in The Meg is a very simple one. Scientists from the Manna One research station off the coast of China have discovered that the Marianas Trench is deeper than previously thought. While exploring the brand new ocean floor, a research sub is attacked by a 75 foot long shark. Word of the attack reaches deep sea rescuer Jonas Taylor (Jason Statham), and it’s up to him to rescue the trapped scientists. As Taylor and the crew escape, the shark escapes behind them. As the shark begins to attack, it falls to the crew of the station to stop the giant carnivore. Rounding out the cast are Bingbing Li as Suyin, Rainn Wilson as Morris, Cliff Curtis as Mac, Ruby Rose as Jaxx and Shuya Sophia Cai as Meiying.

Director Jon Turtletaub and writers Dean Georgaris, Jon Hoeber and Erich Hoeber bring audiences a movie that is a lot of fun. As I stated earlier, this film has a very simple story; but where this movie succeeds is in the action set pieces, and the cinematography. This film is absolutely gorgeous. The action set pieces are fun and frantic, and everyone looks like they are having a good time filming this movie. One of my favorite shots in the film is when the shark is heading towards the beach area, the camera shows an overhead shot of someone paddle-boarding, and the shark swims right under them in crystal clear water. The shot is just breathtaking. Similarly, the best action sequence comes in the third act of the film where Jonas and the team work together to take the shark down once and for all. The sequence is very tense and I found myself holding my breath the whole time. 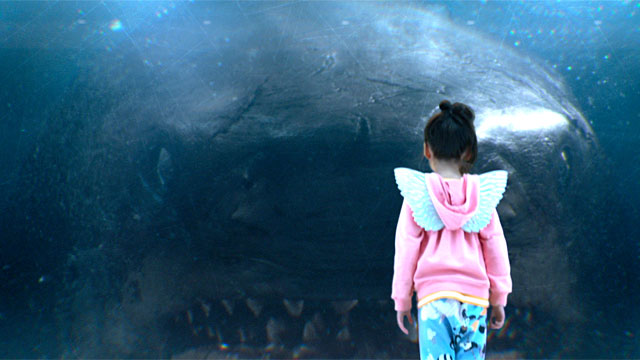 Meiying and the monster

The acting in this film is not great, but it’s still passable. The standout character for me in this movie is the little girl Meiying (played by Shuya Sophia Cai). She is so much fun to watch and you find yourself wanting more scenes with her in it. The chemistry between her and Statham is fantastic, and they play off of each other really well. She even gives Statham’s character the nickname of “Crazy” and Statham just runs with it. Rainn Wilson is once again there for the comic relief, and almost plays a billionaire version of his character Dwight from the television show The Office. Still, I feel like Wilson is miscast in this role, as I found myself getting more and more annoyed whenever I would see him on screen. This film is also the first time I saw Ruby Rose in anything, and I thought she did a fine job. If she brings the fun and the passion that she brought in this film to her upcoming role as Batwoman, then we will be fine.

All of that being said, the film isn’t perfect. The biggest problem I have with The Meg is the overuse of CGI. I understand that in order to have a movie about a giant shark it needs to be CGI, but having the other sea creatures in this film as CGI as well was a little jarring. For instance, I feel that the use of real sharks (or even some stock footage of sharks) for the scene with the shark cage — where the crew uses chum to lure the shark in — would’ve worked better. Also, while I love the third act confrontation in this film, once again it relies too much on CGI. There is a scene with helicopters flying around, and the resulting effect (I won’t spoil the scene for you) just looks really bad.

All in all, I really had a lot of fun watching this movie. It was nice to turn my brain off for about two hours and just watch a monster movie while shoving popcorn in my mouth. Isn’t that what the summer movie season is about? So if you are looking for a fun escape from things, I would definitely recommend The Meg.