Survival horror was a booming genre when it first emerged. Resident Evil, the granddaddy of them all, popped open a cork that has since never closed for gaming, however it was mostly about the jump-scares and gore, rather than attempting to learn and adapt from what it did. It’s hardly surprising then that Konami (well before the dark Pachinko machine years) looked at what this emerging genre had to offer and came up with its own take – on the Playstation no less. In probably one of gaming’s best examples of parallel evolution: the Silent Hill series was born. It’s no exaggeration to say that it helped to codify the genre.

The premise of Silent Hill is simple at first glance: Harry Mason, a single father takes his daughter Cheryl on a trip to the summer resort town of Silent Hill. After a car crash, however, Cheryl goes missing, and Harry sets out to find her. What should be a sleepy resort town is devoid of people, covered in fog and off-season snow, and filled to the gills with monsters. 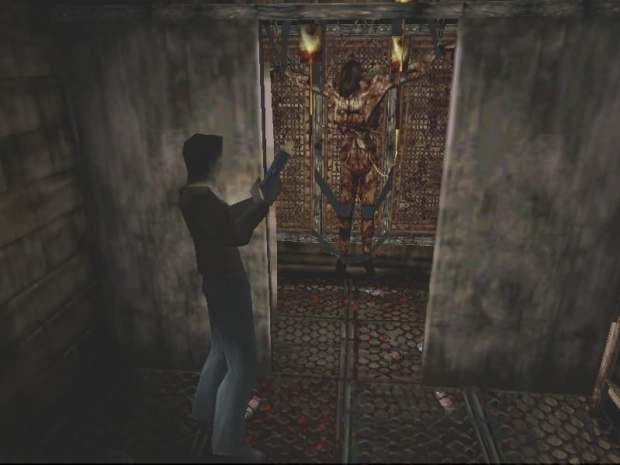 The gameplay for Silent Hill is, for want of a better word…interesting, by modern standards. One has to account for the fact that these games were of their time, even by the standards of someone whose first Playstation games were Spyro and Metal Gear Solid. On an objective level Silent Hill’s mechanics are not great. You spend more of your time fighting the controls to turn in the right direction, than actually playing the game. This isn’t an issue with old style controls, but when you’re struggling to do basic things like turn, it can really harm your ability to get engrossed. While I can kind of understand the argument that the controls were intentionally a tactic to add tension, it’s really hard to read the creative intent that way when basic functions are made unnecessarily difficult for the player.

That being said, Silent Hill is a creepy game for its time. It has an atmospheric edge that (for me, anyway) the original Resident Evil doesn’t quite match. The idea of walking through a desolate fog alone is far more likely to happen than entering a haunted zombie mansion. It also successfully channels a tone along the lines of The Shining, both in terms of the bizarre construction and warped architecture of Silent Hill itself and the Kubrick-esque events of the story. While the game itself is largely a vehicle propelling you through Harry Mason’s time in the town, it’s hard to argue when the narrative is actually that compelling.

Now does that mean I actually recommend the game? Well, it’s difficult, but I have to lean toward a no. Certain games transcend their era, or are constructed well enough that it’s worth trudging through them — flaws and all. While Silent Hill is a good game, it’s difficult to recommend to a newbie when: 1) it fights against the player, 2) so much time has passed, and 3) other games — including some within the Silent Hill franchise itself have managed to build upon the foundation that the original laid down. While that’s certainly not a signal to try the remake, there are certainly less frustrating games within the Silent Hill series to try.