Who or what inspired you to cosplay? Google for real. I was random searching and found a Spider-Man costume for sale and bought it. I was so excited to get it. I was the kid that safety pinned a towel to my shirt and jumped on the bed flying like Superman.

What do you do when you aren’t cosplaying?  I’m a Sheriff Deputy. My assignment is School Resource Officer at Westlake High School in Waldorf, MD. I also serve on the Hostage Negotiation Team and Special Events Response Team. I’m also a gym rat. I used to body build but took a break from it. I also play semi-pro football. I’m a placekicker and was the first black placekicker only player at Bowie State University, which is an HBCU.

What costumes have provided the biggest challenge and rewards so far and why? I would say Superman. You get weird looks because I am black, and of course Superman is white, but then there’s the little kids who see no color but the blue and red S and say “hey there’s Superman!” And the older folks who say “it’s about time Superman is a brother”. 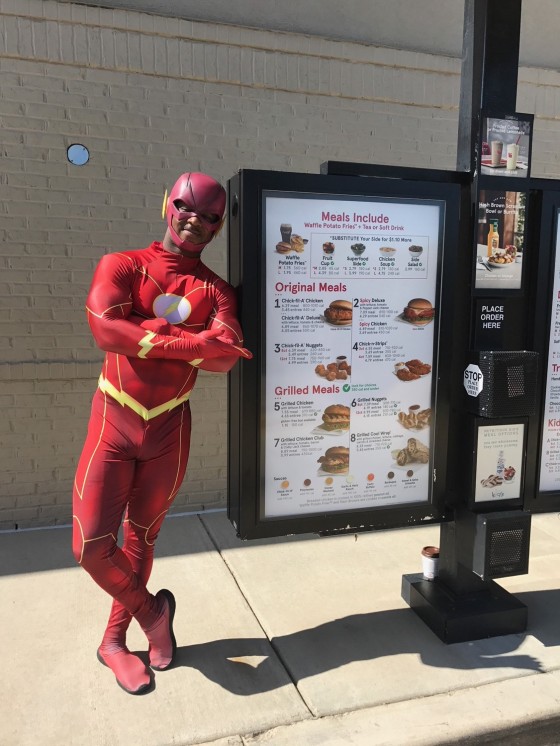 What is the best advice you would give someone new to cosplaying? Do you. Don’t be hindered by what people think. Also don’t skimp when it comes to money and time. Quality costs, and time is money. Take your time and get the details right. You’ll thank yourself in the end.

What is one thing the cosplaying community can do better when it comes to dealing with each other? Shaming. I don’t know if it’s trolls or what, but race, gender, and body size shouldn’t be a major factor when cosplaying. If that’s a character you love and connect with, do it!

How does being a father change your outlook on cosplay? I’m only 3 weeks in to fatherhood, but I love it. If I could find my son a onesie to match every one of my cosplays I would.

2 Comments on Cosplayer of the Month: Rocko Dubbs