Fallout has been a landmark in the realm of single player RPGs. Both for its absurdist post-apocalyptic sci-fi humor and for its commitment to translating that into fun gameplay. Whether that was in the earlier isometric entries of the first two games, or the more first-person shooter oriented sensibilities of Fallout 3 onward. However, Fallout 76 announced at E3 proves to be something of a different animal entirely from its predecessors.

Following its announcement at E3, Fallout 76 has been somewhat polarizing among gamers. So, two of us thought we would give you our takes on why we like or dislike the idea of this upcoming Bethesda Game Studios title.

Virginia:
Fallout 76 takes place 25 years after the nuclear bombs fell, a period fans have speculated about, but never seen. Now we can. Set in West Virginia, we will be immersed in the most ambitious map yet. Todd Howard said this will 4 times bigger than Fallout 4, which was an impressive map that included a number of Boston landmarks. If this map truly is bigger, this will be the most immersive and detailed Fallout game with gameplay hours spent solely exploring. The view will be worth it too. As for the plot, the story follows dwellers from Vault 76, a controlled vault where people were not experimented on and lived with the expectation that they would be released in 25 years to reclaim the United States. This will be great as we’ve never seen the world so soon after the bombs fell. Every game prior was set hundreds of years later. To see the beginning, and knowing that it will fail, will be a fascinating insight into Fallout lore.

Slewo:
In this respect, I can’t offer too much in the way of grumbling. The setting isn’t one that we’ve seen before and I’m curious to see how Bethesda one-ups themselves here. If nothing else, it’s going to be an interesting environment to explore, and I genuinely am curious to see how this differs given the early beginnings of post-apocalyptic America here. It also offers a vision of a West Virginia that hasn’t quite been tamed like the Fallout we’ve come to know. Slewo:
Personally I’ve found the notion of always-online games to be anathema when it comes to a series that tends to be story-based like Fallout. If there’s a failure: either on the server, ISPs, etc you’re pretty much stuck without the ability to play. Moreover, if/when the game gets shut down, you’re then deprived of the ability to play a game you played. While I can understand to a degree an infusion of optional multiplayer, it just feels counterintuitive to the spirit of the Fallout series in that respect. A game that’s been a solo RPG since its infancy isn’t something that will necessarily translate into an MMORPG, Star Wars: The Old Republic is a good example of that.

Virginia:
Fallout has always been a solo series, but every story requires you to interact with a number of NPCs that propel your story forward. Whether you’re Dweller or the Wanderer, you cannot play without the help of the NPCs around you. Online feels like the next step in teamwork that the series has been an advocate of for so long. Finally, your companion can be your friend, someone you can work with and talk to in a number of ways that AI could not accommodate. Slewo has a point that gamers are at the mercy of their internet connection. However, the same can be said for Blizzard’s successful franchises. Wonky internet connections and weekly maintenance do not deter users from World of Warcraft, and I feel it will be the same case for Fallout 76.

Virginia:
Tying into what I said for the online play, Fallout 76 is the next level of teamwork in the games’ franchise. What seems to scare people is the chance of getting ganked by higher-level dwellers. However, I’m sure the map will have “safe zones” like any other MMO. Also, if each world will truly be made up of dozens of players and not hundreds, it must be easy to jump between servers to find one more your speed. If they want to take a page from more successful MMOs like World of Warcraft, they could make each server specific to a certain gameplay (i.e. roleplay or PvE-only servers). Another option is controlled endgame content release. By this, I mean they don’t release all the endgame content at once to allow gamers to catch up and prevent the faster gamers from having all the fantastic loot. I’m curious about the addition of nuclear launch sites, but it looks more complex than walking into a building a pushing a button.

Slewo:
Yeah, this game’s multiplayer is going to need some distinction in its areas in order to allow different styles of gameplay to evolve. Granted, there’s still quite a bit of opacity as to what the maps will be. But ideally, as Virginia said, there’ll be different styles of play allowed like any other AAA MMORPG these days. That being said, I’m curious to see how much of the game will be a cooperative shooter vs an actual RPG. Striking that balance will be key to this actually being a Fallout game. 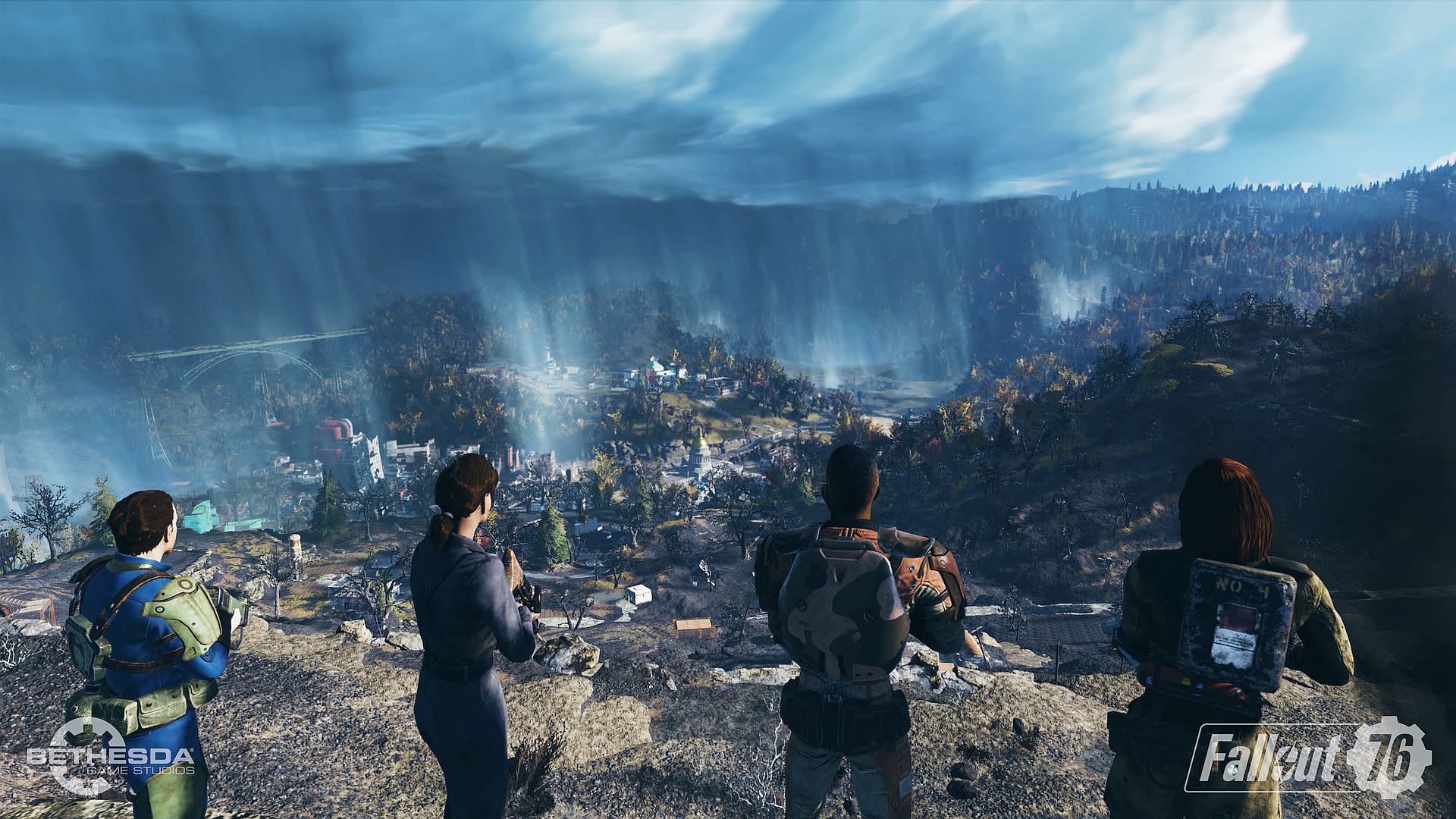 Virginia:
Speaking of nuclear missiles, let’s talk about the new settlement mechanics and how you can move them anywhere. This sounds great. I spent hours on my settlements in Fallout 4 and I’m sure I didn’t explore it all. One problem I had was the limited space in many of the settlements so I couldn’t expand as much as I wanted. Now I think I will. However, with greater land means greater consequences. The biggest of which is the addition of nuclear sites located in various spots on the map. While this sounds as simple as pressing the button, it’s not as there are hints that you will need multiple cards to activate that site and not all cards will be easy to collect. The presentation touched on the fact that random encounters can damage the settlement too. I can see this being scarier than the nuclear sites as I can only imagine what one Deathclaw could do now that that metal walls break. Fortunately, death doesn’t mean the end of a player’s game progression. You still have all your stuff when you come back, and that means you can take risks. That sounds fun to me.

Slewo:
I was never that into the settlement aspect of Fallout 4. It felt more like The Sims rather than Fallout. But as far as injecting replayability into Fallout 76, this could be promising; especially with the notion of collecting launch codes in order to use a nuke. That being said: I could see this becoming repetitive fairly quickly, so I’m hoping there’s more than just a settlement and nuclear destruction cycle.

Virginia:
As soon as I found out that the Fallout 76 Beta will be available, I immediately hopped on Bethesda. Here’s where Slewo can get my negative thoughts on this game so far. I was not happy about Todd Howard’s lack of details in his announcement of the Beta. It turns out that you need to pre-order the game. Even then, not everyone has their Beta code yet. I got mine, pre-ordering the Tricentennial Edition. However, my boyfriend pre-ordered the Power Armor Edition and has yet to receive his code. GameStop knew nothing about it, which is inconvenient since Bethesda’s website says to contact your store’s customer service if you didn’t get the code yet. Hard to do when their customer service knows nothing. Despite all this, it looks like the collector’s editions are worth the investment for the rabid Fallout fan, ranging from custom in-game cosmetics to a real T-51b Power Helmet. The best part about all this though, that this game is coming out this year. I’ll see you in the Wasteland.

Slewo:
There isn’t much else I can add on that front. As far as the Beta code, that’s pretty strange that apparently it’s hit and miss with receiving them. But at the very least, it seems like Bethesda is offering a wide range of goodies for the collector’s edition. So far I’m not won over yet, the history of single player RPGs being welded onto multiplayer games gives me no reason to raise my hopes. If nothing else there is some promise to Fallout 76 and the type of game Bethesda seems to be trying for. With any luck, my expectations will be be broken.

There you have it. There were some things about Fallout 76 that we agreed on, and some things on which we just couldn’t find common ground. As we said earlier, this game has been pretty polarizing amongst fans of the franchise. Either you think it’s great, or you are set on skipping this chapter in the Fallout saga. But where do you fall on these choices, friends? Let us know your thoughts about Fallout 76 in the comments below!