Ubisoft held their E3 presentation yesterday, and they seemed to really bring the hype train with them for their reveals. Several titles were announced, and surprises were sprung for the entire 90 minute conference.

The highest level of anticipation and applause, however, seemed reserved for Assassins Creed Odyssey.

Recently leaked due to a photo of a keychain, Assassins Creed Odyssey has been on the minds of gamers ever since that fateful photo was spread around the internet. Was Ubisoft really going to take the saga to Ancient Greece? What would the story hold? Who would our character be? Who would we meet in our travels? Well, the Assassins Creed team took the stage at E3 to talk about the game in detail (as much as currently possible, anyway), and viewers were given a first look at the cinematic trailer!

Like previous AC titles, we’ll get to explore history a bit. Assassins Creed Odyssey is taking us back to the Peloponnesian war era, when strife between Sparta and Athens led to a lot of bloodshed. Unlike previous chapters in the AC saga, however, players will be given a choice of assuming the mantle of one of two different characters for the whole game. We will get to choose between Alexios or Kassandra, and we’ll travel a beautiful (yet war-torn) landscape. Viewers of the conference were told by Ubisoft that the two warriors are said to “share the bloodline of a legendary Spartan hero”. This was made a bit clearer when another trailer was introduced. In that video, we see Alexios and/or Kassandra being bequeathed the broken spear of the legendary Spartan king, Leonidas. The weapon makes each of them exceptionally powerful fighters, and each one is forced to make decisions from that moment forward – decisions that will define their adventures throughout their story.

As to what those adventures hold? Well, we were treated to some of that in Ubisoft’s presentation. We’ll of course see stealth mechanics and open combat, both of which look very similar to the mechanics in Assassins Creed Origins. The classic scaling of tall structures is of course going to be a large part of traversal and navigation.

Making more of a comeback, however, is ship-to-ship naval combat. A fan favorite in games like Assassins Creed IV: Black Flag and Assassins Creed Rogue, ship-to-ship combat seemed to take a back seat when it came to Assassins Creed Origins. However, it appears as if the lure of the Aegean Sea was too much for the developers at Ubisoft to resist. The naval warfare of the time played a decidedly large role in the war between Sparta and Athens, and this game seems to show it off well. The battles look grand and explosive, using powerful ships and intense combat. All with the ability to destroy other ships using a variety of methods.

Another new piece of game mechanics for this chapter in the Assassins Creed story, is the ability to call upon a mysterious power from within the blade you carry. The blade glows with purpose in several of the trailers’ scenes, and seems to allow for much stronger strikes than should be humanly possible. Could these two warriors have unwittingly been given a Piece of Eden? We’ll have to wait and see.

As seen in the gameplay, it seems that Ubisoft is also taking further steps to add to the depth of this title, and the story overall. Choice-based dialogue will allow us to role play as the hero, or be as devious as we choose. In addition to this, we’ll see more customization options in the character and skills menus. The immersive dialogue, special combat abilities, and detailed menus seem to offer Assassins Creed Odyssey a depth never before seen in the franchise.

All in all, the announcement of this title was, while expected, very satisfying. As a huge fan of the Assassins Creed series, I have been looking forward to the next chapter in this story ever since I finished Assassins Creed Origins, and I am now chomping at the bit to get my hands on this one.

Now, not only did we learn a bit about the story in Assassins Creed Odyssey, but we also found out about the pre-orders and the special editions of the game that come with them. It appears that there will be SIX editions (including the Standard one) of the title. As is the norm with special editions, these will be a bit pricier than the Standard edition, but will also come with extra content. Here’s what we know: 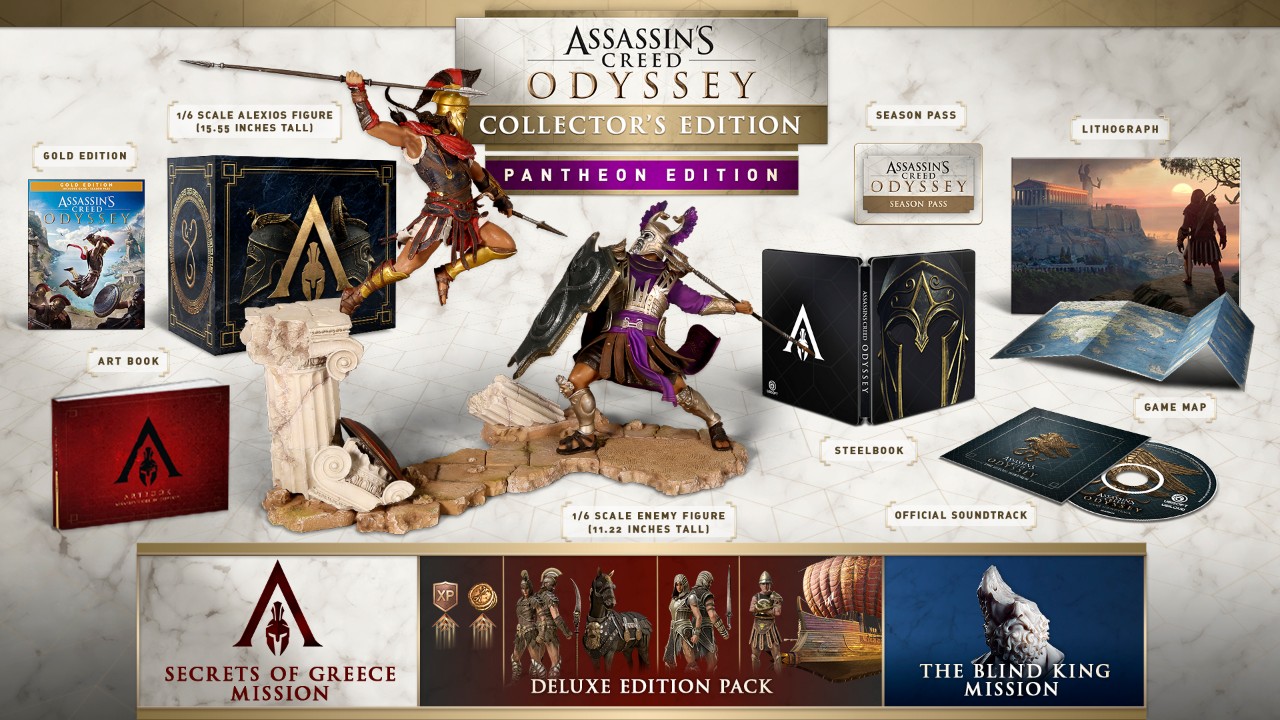 Everyone who pre-orders Odyssey will also get access to another mission called “The Blind King,” although no details about what we’ll do in this mission were shared.

The last cool thing? We won’t have to wait terribly long for this game, as Assassins Creed Odyssey will release on October 5th, 2018!