Some may be wondering why we’re reviewing a board game that’s well over a year old. After all, isn’t the point to learn about new games and spread the word?

For one, it’s never too late to talk about awesome games. Sometimes, people miss a game and aren’t sure if it was worth getting into later. Other times, we need a refresher so we can take a favorite down and replay or introduce someone new.

The other reason we’re doing this is because it’s Star Wars. The Last Jedi is a little over a week away, and it’s time to get your nerd on. Given Star Wars: Rebellion was the most recent board game from Fantasy Flight Games, what better way to prepare for the latest epic in the Star Wars universe?

Rebellion is a complex strategy game that mirrors the battle between the Rebel Alliance and the Galactic Empire. One player plays each side (we’ll talk about more players later), each with their own goals.

The Empire needs to stamp the rebels out of the galaxy, which is done by finding their hidden base and wiping them out. All of them. The Rebels win by earning galactic support through their cause; this is done over time but hurried along by a succeeding at objectives that build their reputation.

For such a complex game, each turn is relatively simple. Assign some (or all) of your leaders to missions, take turns resolving missions or moving your military (with the possibility of battles), and then end by gaining new goals, units, and leaders. 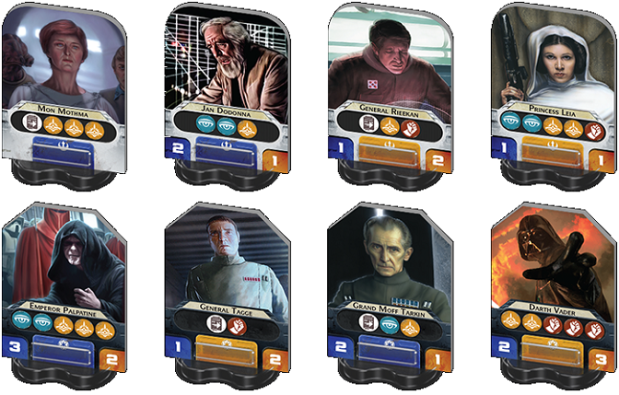 That simple turn order, however, is an illusion; there is so much you can do, but you have so few resources with which to do it.

For example, assigning all your leaders to missions leave you none to counter your opponent’s missions or help should a battle break out. Leaders are also necessary to move your military from one star-system to another; if there’s no one to take command, your units just mill around.

Players must strike a balance on how many leaders they risk on missions, how many they use to command their military, and how many they keep in reserve just in case. Not to mention, each leader excels at specific areas, so knowing who’ll do the best on a mission (or countering that type) is essential. 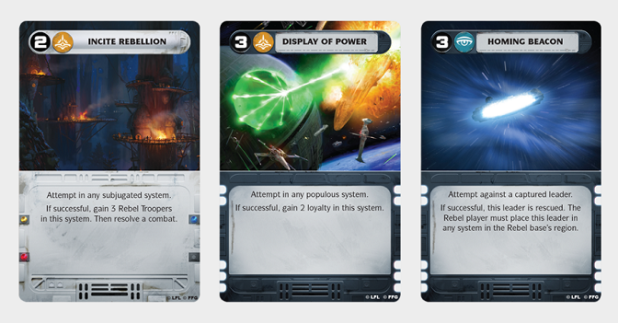 Combat between units is straightforward, almost like an oversimplified version of X-Wing, Imperial Assault, or even the Star Wars RPG. Two different colored dice have symbols that represent varying levels of success or tactical advantage.

Units use different dice to show what they can hurt; an X-Wing is usually good against fighters only, whereas a Corellian Corvette can damage both fighters and capital ships. Of course, with the right roll or Tactic Card, even that starfighter can get a critical hit on a Star Destroyer.

Even small battles often result in dead units, but every couple of rounds you can build more. The Rebels usually have missions that allow them to create units, even if they’re insurgents trying to free their subjugated planet. The Empire is more dangerous, as their projects can grant them Super Star Destroyers or even bring the dreaded Death Star’s laser online.

Rebellion’s upside is its replayability and fun take on a story almost everyone has heard.

While there are only two ways for either side to win really (find the rebel base or keep the Empire at bay as long as possible), there are multiple routes to either, and they change each game.

Does the Empire start off with a Death Star or do they need to build a stronger navy? Does the Rebel Alliance focus on diplomacy or do they try to win strategic battles? Given each game the missions, leaders, etc. are random, how things unravel changes each session.

What’s great is how the randomization often leads to an “alternate history” of the original films. While not necessarily intended for storytelling, the material is too well-known not to marvel at how your version of Ep. IV-VI ended up.

For example, in our last session, Princess Leia ended up being captured and turned to the Dark Side. She would have even turned a world to the Empire out of fear, had a slick Lando not stepped in and given her pause.

Luke completed his training under Yoda only to be detained by Boba Fett while rescuing Mon Mothma from her carbonite prison. That required Lando and Chewbacca to lead a last-ditch effort against the Death Star (which never could quite get its super laser online), where their victory won them the support of the galaxy.

When a game makes you amazed at how the story unravels, gasping as if you’ve just discovered the villain is your father, then you know it’s worth it. 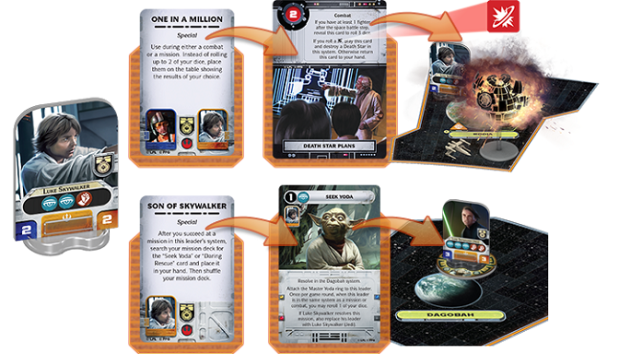 Rebellion has a few downsides because of its size and complexity.

The tablespace requirement for the game mirrors its epic nature – a standard 6’ x 4’ dining table will be taken over by the large board, not to mention all the individual and group components. The pieces themselves will require more than the few bags they provide, although once divided they will comfortably fit into the box.

Gameplay will probably run most people 4-6 hours for their first run-through, mostly due to a lot of rules checking. Afterwards, I’d guess the average session is still several hours, so this isn’t a game you just pull out in play. Setup also takes some significant time, so playing Rebellion probably requires a planned time.

We mentioned how the two player version and there is a way to play with 3-4 players. Unfortunately, that variant seems to hinder the overall strategy, as each person is limited to specific actions and leaders. Some groups may find this fun, but I think this is best played with only two players.

Another turn off for new players is the cost at nearly $100, double the usual rate for most games. I will say the investment is worth it, however, as you have a complete game (unlike Armada).

Of course, that’s not including any expansions, such as the new Rise of the Empire pack which I highly recommend. With that expansion, you gain many new units found in the movies (mainly Rogue One), a different set of missions, and a new approach to battles and tactics. 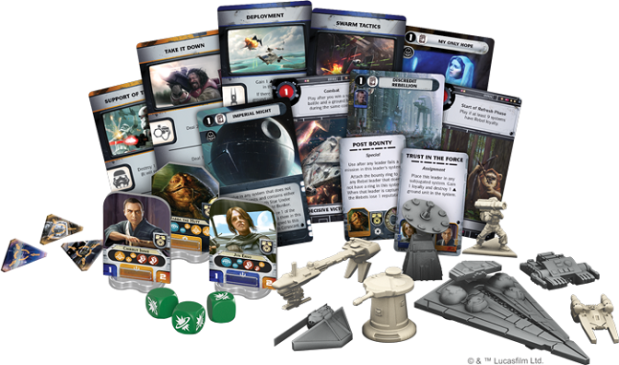 Overall, Star Wars: Rebellion is an excellent strategy game with some good replayability, grand strategy, and fun storytelling. Some players may be turned off by the long setup and play time, the area required to play, and the price tag.

Rebellion is well worth this investment, however, especially with the new expansion involving aspects of Rogue One.