Character development—the process of creating a believable, nuanced character—can be tricky. Spend too much time detailing a character’s past experiences and you risk boring your audience; don’t give them enough depth or information, and your characters feel flat and two-dimensional, Mary Sues less than fully fleshed out.

Video games in particular struggle with this—books and movies have to make us care about the protagonist to keep us watching or reading, but we don’t have to care much about Master Chief’s past or his relationship to Cortana to finish playing Halo; fun multiplayer, good graphics, a cool story mode, etc. are enough to keep people playing whether or not Master Chief seems like a believable, complex character (if you want more info on him, check out this interview with his voice actor Steve Downes).

Marcus Schulzke sums the character development issue up best in an essay anthologized in Game on, Hollywood!: “Good characters in books and movies usually change throughout the story. They grow and learn or are corrupted and debased as they gain experience. Video game characters rarely go through similar transformations.”

That said, sometimes video games get it right, and one such example is Harvest Moon: (More) Friends of Mineral Town’s Poultry Farm residents.

The Poultry Farm crew is made up of three people: owner Lillia and her two adult children, Rick and Popuri. Lillia is positive but sickly; her husband Rod left town to find a flower to cure her. In the meantime, most of the work falls on Rick, who spends his time working and stalking/protecting his sister. Popuri, both bubbly and childish, doesn’t care much what her brother thinks and pushes back against him, meaning the two siblings often butt heads.

Poorly developed characters may look more like stereotypes than real people. In a character sketch as short as the one above, Lillia mimics the sick girl trope, but what complicates her character—what makes her human and believable—are some of her actions later in the game. Sure, she seems awfully sweet and sympathetic during the Taking Care of Lillia event, when both Popuri and Rick run off and bring her medicine, and the Zack Visits Lillia event, when Zack tells her to feel better soon, and Lillia replies—cheerful as always—“I’ll try my best!”

But the game shows another side of her during Kai and Popuri’s orange heart rival event: at first, she seems to be playing the oh-woe-is-me card, but then she turns around and gives the two permission to leave the village—on one condition. And that condition is that Kai must make Popuri “happy forever”—and in the HM world, everyone knows this means marriage.

And what about Rick and Karen’s orange heart rival event? Popuri has already gotten married, and darn it, Rick and Karen have always liked each other, but neither of them is making any move towards marriage—what’s an impatient mom to do?

Corner them, of course, and ask—pointedly—when they’re getting married. Like above, this means the two will in fact get married a week later. Chalk another one up for Lillia subverting her sick-girl stereotype with a little bit of manipulation.

An important thing to remember is that we—as readers or players or viewers—do not have to like a character in order for them to be well-developed. Whether you think Lillia was right to step in or not, what’s important is that the game creators took her sick-girl stereotype and made her more nuanced; they made Lillia more real. 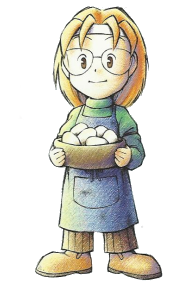 Rick is perhaps the greatest example character development—and here’s what I mean about not having to like a character for them to be well-developed: lots of HM fans hate Rick. There are entire threads dedicated to hating him.

But why? Lots of people find his overprotection of Popuri annoying; others dislike his androgynous appearance (I, for one, did not realize he was a boy at first when I played HM64 as a third grader). Initially, Rick’s hatred of Kai, his sister’s love interest, comes across as two different tropes, the overprotective brother and the whole don’t-date-your-friend’s-sister thing. No one can forget Kai and Rick’s argument, one of the first cut scenes in which the player sees Rick’s rather ridiculous-looking angry face.

One rival heart event between Kai and Popuri allows for a moment of humanity in the otherwise irritable Rick when Popuri stands up for Kai; Rick pauses in his scolding, looks a bit sad—and then returns right back to arguing. His blue heart event in MFoMT might garner him more sympathy points, when he gives the female protagonist a watch that reminds him of his dad and how much he misses him.

But what makes Rick a well-developed character? Let’s look at why he hates Kai. Kai makes Popuri want to leave Mineral Town. Rick is already managing most, if not all, of the Poultry Farm after his father’s departure (let alone the fact that in DS Cute, he’s in charge of Yodel Ranch AND supervising his sister at the Poultry Farm, renamed Chicken Lil’s (even if DS Cute supposed to be 100 years later)); he’s overworked. And now Popuri might leave? The problem isn’t Kai—Rick’s anger sounds like it’s rooted in abandonment issues.

The abandonment issues theory makes even more sense when including Lillia—if Rod doesn’t return with the flower, there’s always the chance that her health could further deteriorate, and death is a form of leaving, too. 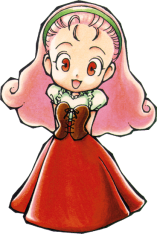 Rick’s character includes a realistic psyche with logical motivations. His hatred of Kai makes sense, even if we, as third party observers, can see how flawed it is; we know that his anger is misplaced, that he can’t seriously expect Popuri to never leave the Poultry Farm, but even so, we understand why he feels that way. As writers, that’s what we need to do: We need to craft complicated, imperfect characters whose desires and motivations feel real enough to be human. And if we do it right, we can create characters even stronger.

The most important thing a writer can do is give their characters’ motivations and growth serious thought. But how do you do that—how do you find the “best” amount of character development in your own work, a happy medium that doesn’t bore readers but also draws them in? It isn’t easy—and it’s going to require some editing, for sure—but that doesn’t mean it isn’t possible. One place to start? Choose a story that speaks to you and examine it to see how that writer handled character development.