Over 30 years ago, Castlevania brought the long standing, blood-fueled feud between Dracula and man to the video game world, unknowingly igniting a fire that would rampage its way into the annals of gaming as one of the best games of all time. While Castlevania II wildly departs from the simple formula set forth by the original, Castlevania III immediately returns the series to its roots following a somewhat mixed reception of the sequel. Several subsequent releases across multiple Nintendo platforms carry the Belmonts through similar stage-clearing adventures, until March 20, 1997.

Castlevania: Symphony of the Night launches in Japan to a welcoming frenzy of gamers, as Konami once again pilots the Castlevania carriage off the beaten path. In place of donning the Belmont mantle, players find themselves in the boots of Alucard, son of Dracula on a quest to end his father’s evil once and for all.

Receiving accolades of perfect and near perfect scores, this offering pushes the boundaries far beyond anything presented in previous installments, from its incredibly massive and labyrinthine design, to its robust RPG character development. SOTN proves to be a Castlevania experience like no other, taking us through expertly reimagined set pieces and completely new areas alike. Classic rooms like the Clock Tower unleash hordes of blood thirsty demons, as Alucard traverses the gears and cogs of the ancient and seemingly living abode of the Prince of Darkness. The multi-story Long Library hosts a slew of new and horrible threats, including headless sword wielding warriors and flesh-craving books. Dank caverns below the castle reunite gamers with the notoriously frustrating Fishmen, and of course, bats. Lots and lots of bats.

Despite the creativity displayed in its presentation, perhaps the most impressive aspect relies on the player’s full and unwavering discovery of all it has to offer. If players manage to free Richter Belmont from his curse rather than killing him, an inverted Dracula’s castle falls from the darkened sky and turns your world upside down; literally. Every single area of this game is built with the specific intention of fighting your way back through the castle upside down and in reverse, adding yet another intelligent design approach to an already arguably perfect game. 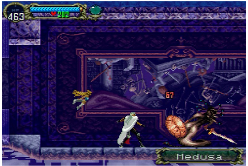 There is no denying the innovation and scope of this masterpiece, as we continue to see it inspire more and more Metroidvania style adventures. Many indie projects follow the formula of the 2D action adventure, notably Shadow Complex (2009) and Axiom Verge (2015), the latter now also available on Nintendo Switch.

As the dusk of Halloween quickly approaches, gamers all over the world agree Castlevania SOTN stands among one of the best games to revisit this time of year. Break out your original PlayStation, PS3, or pick this up on your current favorite platform, the hunt for Dracula begins anew.