On September 1, 1992, Super Mario Kart premiered in North America for the SNES. It sold nine million copies worldwide and became the third bestselling SNES game ever.

In the Fall of 1998, I went to my friend’s house and played Mario Kart 64 for the first time. He expertly zigzagged past me, blasting mushrooms and throwing shells like free candy. I freaked out in fangirl glee when I caught a star and Toad turned rainbow shades with the catchiest theme song ever. I’ve never been the same since.

If anyone asks, my first video game was Super Solvers: Treasure Mountain for the PC. However, Mario Kart 64 was the first game that taught me what it really means to be a competitive gamer…and how easy it is to upset your friends with a well-placed banana. The game convinced my parents that I needed something newer than the Sega Genesis. It also brought a new meaning to having the family gather around the television. My dad played, my mom played, and, when my brother stopped teething on the controllers, he played it too. My brother, however, had the hardest time staying on the track and my dad couldn’t avoid the penguins. “It activated my high blood pressure every time I would hear ‘ow-wow-wow-wow,’” my mom said, laughing as she mimicked the noise everyone knows if their character fell off a cliff, which happened to my mom a lot. She tried though.

Mario Kart 64 replaced family board game night but still kept the integrity of family-friendly competition. It also taught my brother what real loss was when I’d overlap him and he was in 8th place. Don’t worry though, poetic justice came back to me when he’d get “perfects” in Soul Calibur IV against me. We work with our strengths and weaknesses.

The game didn’t end there though. After Mario Kart Double Dash came out, we stilled pulled out the N64. When I went to college, free pizza competition involved winning all four cups in a Mario Kart 64 race in the student lounge. Those were some intense competition, especially when free food was involved.

Recently, I dusted it off to played with my boyfriend during our 1st anniversary. You can judge but my idea of romance is pizza, beer, and video games. What’s sexier than that? Playing the old consoles. Plus, he was bragging that he was still good at it, which I had to correct immediately. We’re still together though so that’s a good sign!

I’m not the only one with memories of Mario Kart in all its various incarnations. Ask any friend and they will talk about how their sibling/friend/significant other got them to play Mario Kart and how intense the races got. They’ll talk about it with a smile on their face too as they remember the fun. Even my non-gamer friends and co-workers know the significance of this game. During a recent water-cooler conversation, I mentioned the anniversary and everyone had a moment of nostalgia with me.

The best video games do that. They bring people together both in front of the console and outside. People will talk and bond. Jokes about the game will immediately lead to friends of a lifetime. For 25 years, Mario Kart has been one of those games. With the release of Mario Kart 8 Deluxe on the Nintendo Switch, those old karts still have some good tires on.

And next anniversary, I’m pulling out the SNES and will still beat my boyfriend. Affectionately, of course. 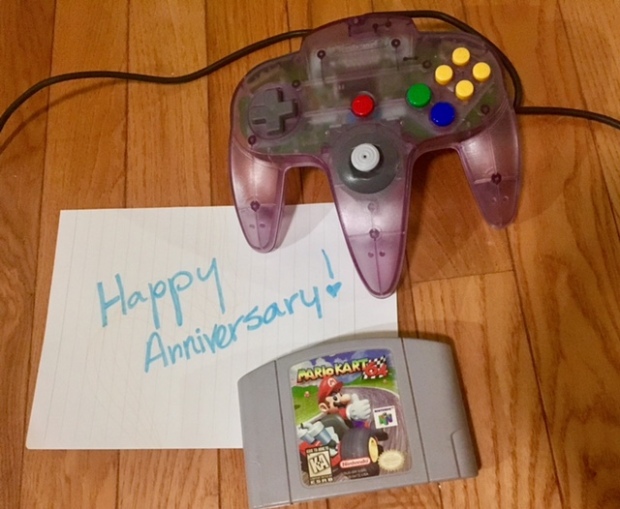 A proud fangirl who somehow found a job getting paid to read and nerd out about books. She love all things sci-fi/fantasy. She read voraciously and friends find themselves hard-pressed to talk to her when her nose is in a book. She is also a gamer (FPS and RPGs mostly), cosplayer, tv/film lover, and budding comic book enthusiast. She lives in Westminster, MD with a room full of books. She has made guest appearances on the "410wned Gaming" and "From the Front Porch" podcast and is a regular on "Three Writers Make a Left" podcast.