Where are you from originally, or where do you reside currently?  We currently live in central Florida, conveniently located an hour from both Tampa and Orlando, which allows us to attend any conventions in the area.

How long have you been cosplaying?  We attended our first convention as a couple in 2013. It was a small local convention in Ocala, but we had enough fun to want to try a large convention. We dressed in what we call “cosplay light”, which consists of store-bought or very simple costumes, for Tampa Bay Comic Con that year. Experiencing the cosplay at this large convention inspired us to craft our own costumes, and we were able to finish them and began cosplaying our own work in 2014.

What characters have you cosplayed?  We try to pick characters and costumes you don’t see at every convention. We also try new materials and techniques so our costumes don’t become variations of the same idea. Our first cosplay was Skeletor and Evil-Lyn from He-man and the Masters of the Universe. It was primarily made of craft foam and the havoc staff being made from a real ram skull. Our second costumes were post-apocalyptic wastelander original characters Buzzkill and Twinkie. They were made out of various materials including real tire tread, a cow pelvis, and a working rotating mini gun made from PVC and a battery operated drill. Our third costumes were Spawn and Violator. The Spawn costume consisted of a modified morph suit with EVA foam armor pieces. Violator was a large practical effects puppet made from a PVC skeleton, pool noodles, upholstery foam, and skinned with plastic wrap. Our fourth costumes were Steampunk Red Riding Hood and The Big Bad Wolf. For those costumes we learned to work and dye leather. We are currently working on Dead Space costumes which will consist of hero armor made from EVA foam and a Necromorph puppet made similar to the Violator. 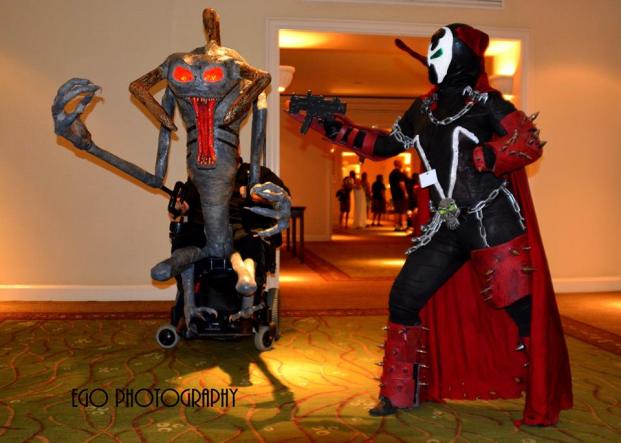 What inspired you to start cosplaying? We always liked Halloween and Nathan grew up always making his Halloween costumes with the help of his parents. Nathan has always been a geek and exposed Catherine to all things geek after they met. We liked the idea of cosplay after attending our first small convention and we dressed in easy store-bought costumes at Tampa Bay Comic Con, our first large convention. There we saw Ron Seaman of aracknoid3 Cosplay. He has also a disabled cosplayer requiring the use of a wheelchair. He was decked out in Gears of War armor with a big blade and gun attached to his wheelchair. Seeing another wheelchair user utilizing his chair as an asset rather than a hindrance really inspired us to try making our own costumes. 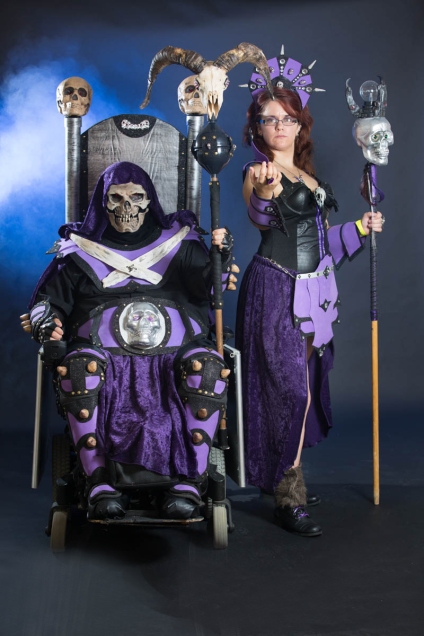 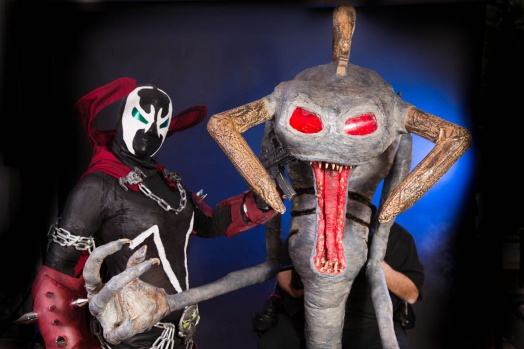 What costumes have provided the biggest challenge and rewards so far and why? Every costume we build provides its own challenges because we like to try new materials and techniques. We like to challenge ourselves when building a new costume so each new costume tends to be more challenging than the last. Every one of our costumes has also provided special memories. Our first costumes, Skeletor and Evil-Lyn, hold a special place because they showed us what we could do if we put forth the effort. The Violator holds a special place because we met special-effects master Greg Nicotero, who built the Violator for the Spawn movie, and he could not stop taking pictures and geeking out over it. On several occasions we have met celebrities who want their picture taken with us. Each costume has provided us with their own unique experiences. 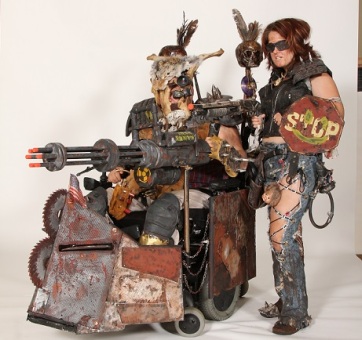 What is the best advice you would give someone new to cosplaying? The best advice we can offer someone new to cosplay and making their own costumes is that the best way to learn is by doing. When we have an idea for a costume, we experiment with materials to figure out the best way to make them. The Internet is also a great resource which has proved to be an invaluable for many of our costumes. Often tutorials can be found that not only give broad overviews of materials and techniques, but also show you exactly what you’re trying to figure out.

What is one thing the cosplaying community can do better when it comes to dealing with each other? Remember that cosplay is about fun. Not every costume is going to come out perfect; you are not going to win every competition or contest; and drama will happen. Cosplay is not about all that. It is about fun, sharing your craft, and the look on someone’s face when they tell you that seeing your costume made their day. 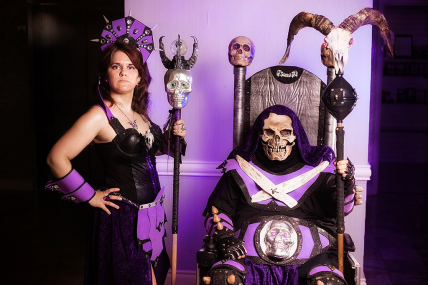 What challenges have you faced as a disabled cosplayer? The community, fans, and conventions have all been great and accommodating, however there is one problem that we, and some other wheelchair cosplayers we know, have faced. When competing in costume contests, the stages are rarely wheelchair accessible. For the most part we just roll in front of the stage and it’s no problem. The problem occurs when the judges can’t see us and they don’t get up to look at our work to give us a fair shot in the competition. This is rare, but it does happen. Things like pre-judging are one thing conventions can do to eliminate this problem.

Do you find that you are treated any differently from other cosplayers because of your wheelchair? If anything we get more attention. Some people are just totally amazed that a wheelchair user could make the stuff we have. The funniest part is that there are 4 wheelchair cosplayers in the area and people are always getting us mixed up with each other because they can’t always see our faces. They will remember costumes but attribute them to the wrong person, and we have to tell them who we are based on our previous work.

What would you say to other disabled individuals who are skeptical about cosplaying because of their physical status (body type / disability / race / gender / etc.)? Play to your strengths. Different people will be able to pull off characters with differing degrees of success, but if people look at physical differences as an asset rather than an obstacle, they will find that their differences can allow them to put a creative spin on a character or allow them to cosplay characters that may be difficult for other people. For example, many people re-imagine characters by changing the gender of the character. People can also use other physical differences in creative ways. For example, wheelchair users can turn their chair into a vehicle and amputees can make cool prosthetics. Just remember cosplay is about fun, creativity, and self-expression. If people are worried about being viewed differently because of physical differences, our advice would be to make a costume and give them something worth staring at!

Nate Cat Cosplay consists of a husband (Nathan) and wife (Catherine) team. In 2004, at the age of 19, Nathan became a quadriplegic from a motor vehicle accident. After rehabilitation and several surgeries, Nathan is paralyzed from the chest down and has full use of his arms, but no fine dexterity in his hands. He has a rudimentary grip, but he found ways to be able to hold a pen or pencil, rotary tool, or pretty much anything else he needs to hold. He can drive, has completed a Master’s degree in clinical psychology 2015, and works as a mental health counselor.