Disclaimer: I will strictly be talking about the English dubbed Glitter Force and not Smile Pretty Cure. The two series are COMPLETELY different! -40 episodes (English dubbed, 8 episodes were omitted due to  “cultural differences”)

In the anime watching community, there is always a back and forth on how you watch your anime: dubbed or subbed. For those who are COMPLETELY new (Hi! Welcome to the madness!), subbed is when the characters are voiced by Japanese voice actors with subtitles in your preferred language and dubbed is a translated version of the original, usually done in English. Ask anyone and if you mention if you like dubbed or prefer watching dubbed, you’ll get some kind of cringe reaction or an elitist reaction; we all know you’re not a real fan of anime UNLESS you watch only the sub! I’m okay with both and I can tolerate both to some degree. To me, dubbed is convenient like if I’m busy working on a cosplay or just want to listen and not read text on a screen. Dubs can be decent or can be horrible, but that’s just something you accept; Glitter Force, a Netflix exclusive, is no exception.

The series follows 5 middle school girls (Emily, Kelsey, Lily, April, & Chloe) who were chosen by Candy, a pixie, to be a part of the Glitter Force. As members of the Glitter Force, they are charged with the task of getting back the Glitter Charms used by evil Emperor Nogo’s minions so that they can revive their Queen Euphoria. The evil minions (a witch, wolfman, and ogre) use the charms to make monsters called Buffoons and the only way to get the charms back is to defeat them using their magical girl powers, each girl only able to attack just once a day. 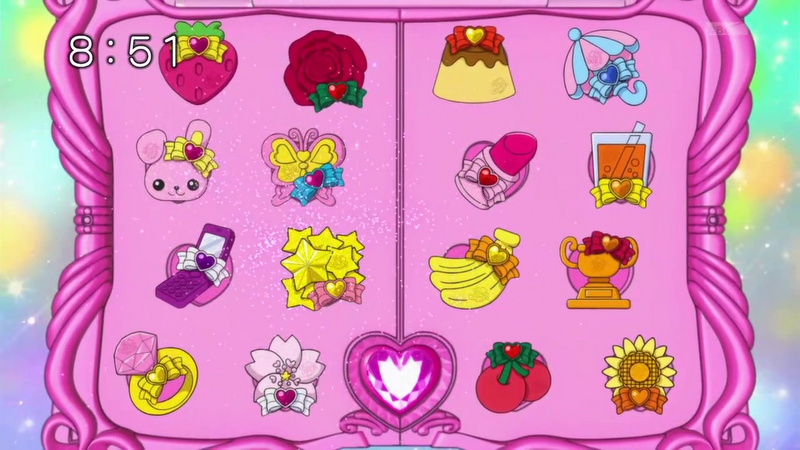 The magical girl genre is simple, but can be complex. You can have more serious and mature magical girl series like Sailor Moon or you can have the more cutesy and upbeat like Tokyo Mew Mew. To me, each “extreme” of the magical girl genre serves a purpose; they teach their own lessons for various ages of girls, women, or whoever ends up watching. Glitter Force is the kind of anime I would show someone in elementary school or middle school, and not because the girls are in middle school themselves, but the problems or concerns they deal with are similar to those under the age of 13 or so; making friends, learning to be confident and comfortable with who are you becoming, learning to think critically and make sound decisions for yourself, and remembering to have a balance between working and having fun. Each magical girl had her own quirk, which fits the archetypes needed for magical girl squads. Each quirk is relatable and can be a guide for the impressionable. You can be shy and timid, but that doesn’t mean any talent or skill you possess is less than someone who is more outgoing and loud. It’s okay to be straightforward or more book smart than athletic, as long as you’re happy with yourself you’re more than perfect just the say you are! I truly appreciated how a lot of episodes focused around friendships, sense of self, and being more than just “a simple middle school girl”; reminding girls that true power comes from within and when you have a strong inner strength nothing can shake your world. In an overly cute and brightly colored way, the series highlights girl power as a group and girl power from within so that won me over easily.

The only downside to this anime, and what I feel created a small disconnect in the series, was the dubbing. As I’ve said before, dubbing can easily be a hit or a miss; that is something you just learn to accept. One of the worst things about dubbing, in my opinion, isn’t necessarily the voice matching or not matching the character but the misinterpretations that can happen; especially when they’re culturally important. Most of the anime produced that I have watched in my lifetime that is distributed most is Japanese, so a lot of themes and contexts are rooted in Japanese culture and language. I understand that it’s not easy to translate some themes into English or another language because maybe there isn’t an exact word, phrase, or similar practice for it, but some things were just completely off base. In a cluster of episodes, the students at the school took a class trip to visit various cities in Japan (Kyoto and Tokyo from what I assume) and instead of just saying that, it was referred to as an “Asian Expo,” so the students were taking a trip around Asia instead of just visiting Japan. In their “Expo” the students tried “Asian food” and saw weird houses (aka Temples and shrines), and a lot of other things; the dubbing made it seem like they were tourists in a foreign land. What really made it odd was in a series of clips after their “Expo” trip was Chloe with her mom in their very traditional Japanese home that was also a shrine with Chloe’s Grandfather sitting on tatami mats doing Japanese calligraphy in a kimono.

I understand when dubbing a series that looks to fit the age demographic of elementary to middle school children, you want to make things easier for them to understand. Okonomiyaki, a savory Japanese pancake, for example was referred to as a “Japanese pizza” and that was okay. It’s not literally a Japanese STYLE pizza but it helps those younger or not in the know of Japanese food culture make a connection mentally and culturally; the “Oh, I get it! It’s like our pizza and our pizza is good, that’s awesome” kind of thing. But to sit and call a trip similar to how schoolkids on the east coast visit the Washington, D.C. an “Asian Expo” and touring around Asia is a little ridiculous. They could’ve worded it to make a connection for American children to understand what the Japanese students were doing; something as simple as the teacher or Chloe, as Student Body Vice-President, saying “Okay everyone, we’re going to take a class trip to Kyoto just like how American students visit their Nation’s Capital” and that would’ve worked. It would’ve shown that they’re taking a class field trip to visit museums or whatever to learn about their history, culture, sightseeing, and all of that, but instead they build a world that is ambiguously Asian of some sort and not primarily Japanese. I think that was a missed opportunity to help the younger demographic learn about a culture and life outside of their own while also making it colorful and fun.

Other than the cultural hiccups in the dubbing, the English voiceovers were hilarious and cute. The power of friendship and message of girls can do anything rang through loud and clear.  The transformation sequences were over the top as usual for magical girl genres. You may also notice that some parts of the sequences were darkened, but that was to cut back on flashing colors to lower the chances of triggering seizures, so nothing is wrong with your TV or Netflix app! Wonderfully appropriate for kids, parent approved, but maybe cringe worthy for someone who is particular about dubbed anime. 3.6 Magical girl transformation compacts out of 5.