Want an educational game that actually looks fun? Check out Eco where you’ll discover that it takes a village to save the world.

You know what games are just the best? Educational ones, I always make sure to pre-order the latest copy of Math Blasters and I was the first one in line for the midnight release of Captain Novolin (An action-adventure game about diabetes) because those games are just so intense! But, masochism aside, sometimes there are educational titles that look like they’ll actually be fun to play, almost like it was some kind of game, but on the tv, like a video? I dunno, something akin to video graphic entertainment or whatever.

Well, believe it or not, such a unicorn is in the oven (metaphorically speaking, I’m pretty sure it’d be impossible to fit an entire unicorn in an oven). Strange Loop Games is looking to “cross the divide between the game market and education” with their current work in progress Eco. Despite being an educational game, so far they’ve developed a title that looks like it will not only be fun, but challenging, educational and replayable (willingly).

Strange Loop Games has been working on this project since 2014, exceeding their Kick Starter by over twice the goal amount, while also securing a healthy grant from the US Department of Education to help make Eco a reality. Some might see this as excessive. However, considering the studio’s ambition for the game content, how it will be implemented in schools, and their regular updates to the alpha testing, it looks like a worthwhile investment so far.

The studio’s goal for Eco is to educate people to be more globally minded. Players will be challenged with being benevolently progressive and respecting the environment they need for resources. Though Strange Loop Games is not being blatantly educational like other titles based around learning, such as History of Biology. Instead it’s up to the players to extrapolate the true lessons Eco has to teach, rather than beating people over the head with the message. However, if people fail to achieve the game’s goal the consequences come in suppository form, size XL.

Eco is a new genre of game that Strange Loop Games has called “Global Survival.” This means players will literally be responsible for trying to save the world from a cataclysmic event. The basic premise of the game is that the players must stop a predetermined event, a meteorite, flood, massive volcano eruption, bees, etc. by developing the proper technology to save themselves, starting from the stone age. However, there is a catch: the world’s environment also reacts to what the players do, chop all the trees without reseeding new ones, no more wood. Over hunt a particular animal and it goes extinct, it’s up to the player community to find a balance between progress and sustainability.

There are also aspects of urban planning involved, having a mine too close to a water supply will pollute the water and make it unusable or if proper waste disposal isn’t used then it pretty much salts the earth. This leaves the players in a very precarious situation of trying to save the world from destruction without destroying themselves in the process, because if the players fail to develop the tech they need to avert the crisis or destroy their biosphere the world (server) is wiped out (erased) and everyone is reset back to the beginning. So saving the world is truly in the hands of the players this time and the price of failure is steep.

At first glance the game it seems like a pretty version of Minecraft. But, delving into Strange Loop Games’ updates, it’s clear to say that things can get rather complex. Players will have skill trees that they need to develop; people will be able to specialize in things such as farming, lumber working, metallurgy, etc. so it will take a village to make any progress (but, there will be an option for a single player game). Aside from this and the reactive environment, they’re also making carrying weight more realistic. So this means players will need to develop vehicles and fuel to continue making progress, while also monitoring carbon emissions. Not to mention, this will force players to collaborate on building the networks they need to transport materials around the world.

Also, players need to pay a large amount of resources to unlock books which will allow them progress through the technological ages. This will give people access to more advance skill trees needed to develop sophisticated technology, which will be necessary to save the world from cataclysm. These books will spawn infinitely. However, the player(s) who unlocks them gets to decide if they want to be completely altruistic and give the knowledge away for free or charge other players for the knowledge, to make up for the resources that were spent discovering it. 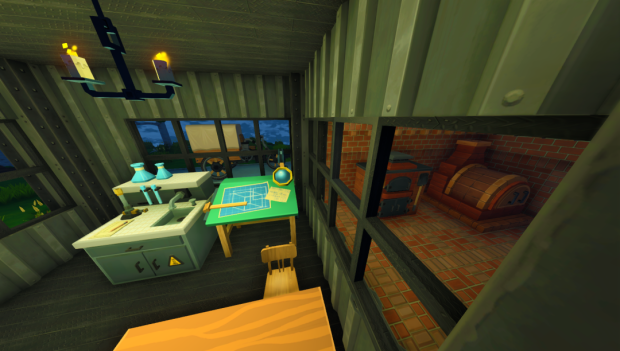 Also, another feature worth noting is that players will be able to “propose and vote on laws that will become physical limitations in the world”. Players will be able to use evidence from in-game data and graphs to support their reasoning. It’s not often that games offer this type of challenge for developing leadership and sandbox rational thinking.

Eco starts off looking simple, but quickly becomes complex, which is the same as the lesson it wants to teach. The environment is precious, but we need its resources to develop technology, which if used responsibly can be our salvation. If abused, however, it will lead to our destruction. Just as the players will be both the protagonists and antagonists of this game, will they come together and work towards adverting disaster or will the world be snuffed out by greed’s gluttonous maw? I guess we will just have to see.

This article only scratches the surface about Eco, so if it peaked your interest, I suggest heading to Strange Loop Games’ website and really diving in because this game hasn’t been getting nearly the attention it deserves. For those who want to give this title a whirl it is possible to buy access to the ongoing Alpha on their website for $40.

Final Note: I joked on educational games pretty hard, but that was mostly tongue and cheek… Mostly. If done right they can actually be really fun. Carmen Sandiego taught me the love of puns and that I’m terri-bad at geography (Ah, the one that got away). While The Oregon Trail taught me that it’s cheaper to buy bullets, rather than food. That and my terrible life choices will most likely lead everyone I know and love to their demise, before I die alone, with only broken femurs and dysentery to comfort me.