Have you ever dreamed of living in a cartoon? Wanted to toy with devices of super science, despite your lack of a degree? How about having a misanthropic Doc Brown as a paternal figure?  Or have ever wondered what it would be like to live as someone’s clone? Well, your oddly specific dreams are about to come true! Adult Swims Games newest title Rick and Morty: Virtual Rick-ality is coming to a HTC Vive and Oculus Rift near you. Developed by Owlchemy Labs  – who worked in in close conjunction with series co-creator/ voice actor, Justin Roiland – the game will be ready to release alcohol and science fueled mayhem in late April.

Not too much is known about the game, as Owlchemy Labs has been playing this title pretty close to the vest. It was first announced in July 2016 along with its first playable demo at SDCC. Thus far they’ve only released a handful of screen shots and a brief snippet of video (like, seriously it’s only about 15 seconds). The teaser video is short, incredibly promising and absolutely tantalizing. –So that’s why they can them “teaser” trailers, who knew?- Unfortunately, PCU maintains a PG-13 rating and the teaser has some comically MA content, but it’s a fairly easy google search to find, not that I’m telling you to see the trailer right now. Anyone with upright moral sensibilities probably shouldn’t watch the trailer… or if you’re particularly uncomfortable with the human anatomy you might not want to go watch the trailer. Even though the trailer takes place in Rick’s garage, Owlchemy Labs CEO (/chief scientist/janitor) Alex Schwartz enthusiastically promised that players will be able to jump through portals. “Our super-genius shader programmer guy on our team built a seamless world transition portal system, where as you walk towards it you can see inside the world and peek around inside it, and you basically walk right through it and there’s no seam and no pop. It’s f—ing insane.”

While not much is known about the title, fans of the series can look forward to more than just rehashed plot lines and sound clips from the show. According to Owlchemy Lab’s janitor, the studio has been working closely with Roiland to develop this game; which is supposed to bridge the gap from where the show left off and dive into content fans have yet to see unfold. “It’s actually the perfect overlap,” Schwartz says.

When it comes to flushing out the dialog, Owlchemy Labs would send Roiland a first draft and a few recordings for reference and he would return them an hour-long brain dump where he dives into the game world. These takes apparently had the studio laughing to tears, so the fans can expect some new additions to their repertoire of quotes (wubba lubba dub dub)! As the story goes, this collaboration got started when Roiland, a VR ethusist and fan of Owlchemy Labs’ title Job Simulator, invited the studio over to his house for a night of games, beer and Indian food. They must have had some strong chemistry, because during their first date the idea of working on a game together just seemed to click. It’s as the old saying goes “You can’t deny the power of love between a man and an entire gaming studio.” It looks like they made a beautiful baby together; a beautiful, debaucherous, alcoholic baby.

It seems like a lot of love went into this because judging from the screen shots and videos Owlchemy Labs has made some incredible improvements from Job Simulator. The graphics Rick and Morty: Virtual Rick-ality mimics the show’s animation style and renders the textures rather smoothly compared to their earlier titles. While exact gameplay elements are unclear, such as some sources claiming the game revolves around the player being one of Rick’s clones, while others say it’s a Morty clone (Though grammatically speaking, any clone made by Rick would be “one of Rick’s clones”). Also, the few screen shots are conflicting one with the player avatar brushing their hair as Morty, while another has you at eye level with Rick and yet another has the player holding what looks like a beer bottle. There is also a screenshot that hints at a possible multi-player mode. So we will have to just wait and see, though a character select wouldn’t be a bad route to go. Aside from VR grab-assing and tomfoolery, there have been hints that the game will include puzzle challenges. Given how Owlchemy labs continually pushes the boundaries of VR (and they got the accolades to prove it) and their mantra that “We believe that interaction and using your hands is what truly makes virtual reality the most incredible place to build unique content that blows players minds.” It’s difficult not to expect a unique and entertaining experience. 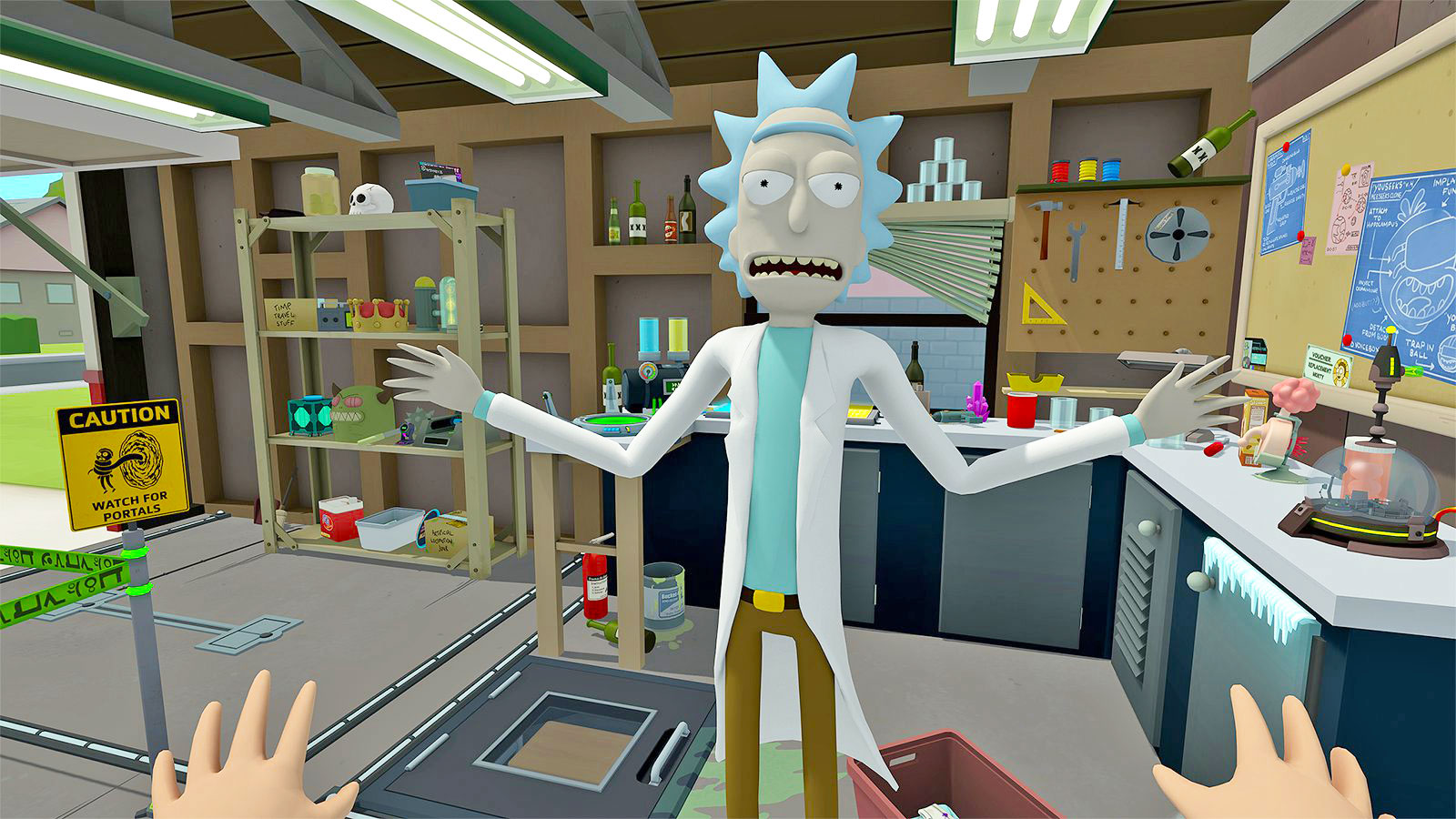 The game is going to be released for the Oculus Rift and the HTC Vive, with a room scale play area and requires the tracked motion controllers. The price tag is speculated to be $29.99 USD and the release date is slated for April 20th. Wait, it’s going to drop on 4/20? Clever girl… So you have less than a week to get your body ready. This game looks like it will be a must have for fans of the show and VR enthusiasts who own a Vive or Oculus and they should invite me over to mooch off their system once the game hits the shelves.