A cult classic amongst Tarantino fans, 1992’s Reservoir Dogs has been a fan favorite for years. Now, as we approach the film’s 25th anniversary, it would see, that game developer Big Star Games is seeking to bring the movie’s lore to the world of gaming, with their recent announcement of Reservoir Dogs: Bloody Days.

The iconic cast of Mr. Pink, Mr. Blonde, Mr. Brown, Mr. Orange, Mr. White, and Mr. Blue will once again grace our screens, only this time in a game format. That being said, it seems that the mechanic in the game will only allow for three of the characters to be played at any given time. Players will directly control one of these characters at a time, but the action(s) taken will get recorded, and repeated once the player takes over each of the other two in turn. The mechanic has been dubbed “Time Back” by Big Star Games, and it is designed to help players learn each scenario as they play. If one character is killed, the second one can actually attempt to prevent the death by killing the first character’s killer before the fatal strike happens. Kind of like a weird jump back in time. 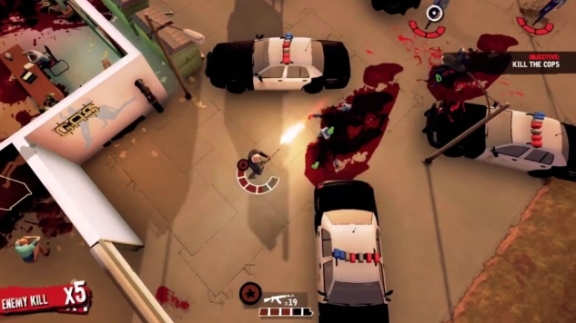 In a press release from the developer, Big Star Games CEO Liam Patton stated, “As huge fans of Reservoir Dogs, we’re very focused on creating a highly addictive experience that stays true to the tense, dramatic vibe of this unforgettable movie. By taking control of different characters for overlapping bursts of time, players must utilize the strengths of each squad member to carry out the game’s missions, with every move and shot creating a butterfly effect on the overall outcome.”

Fans of the original film should not, however, expect to recognize the faces of the characters in Reservoir Dogs: Bloody Days. Due to the cost involved, the developer did not use models of the original actors’ faces. It would have been prohibitively expensive for an indie game studio. However, the top-down perspective gives the game a new feel, while still retaining the sense of something familiar with the characters.

Reservoir Dogs: Bloody Days is expected to drop on Steam sometime this spring (followed by a version for XBox One), although a formal release date has yet to be announced.