*This isn’t meant to be a full review of the game, merely my thoughts on the open beta release. I played it on the Xbox One and I really don’t think there would be much difference between platforms, other than slight graphical tweaks.

If you’ve never heard of the game, you are a member of the Ghosts, a secretive and elite Special Forces team sent to Bolivia in order to take on the Santa Blanca drug cartel. You approach this via a bottom-to-top plan of attack that involves you destabilizing the cartel and moving your way up the chain until you get to the head, the mysterious El Sueño. You are given carte blanche in this and can take whatever steps are necessary and in whatever order you deem to be most efficient to accomplish your goal and complete your mission. You and your Ghosts are in enemy territory and won’t be getting any official help from the US Government, so you must rely on yourselves and the Rebel faction of Kataris 26.

Character generation in the game is pretty extensive. You can choose from premade Ghosts, male and female, or you can dive into the deep end and customize away. I made my guy as close to my Division agent as I could and jumped into the game. 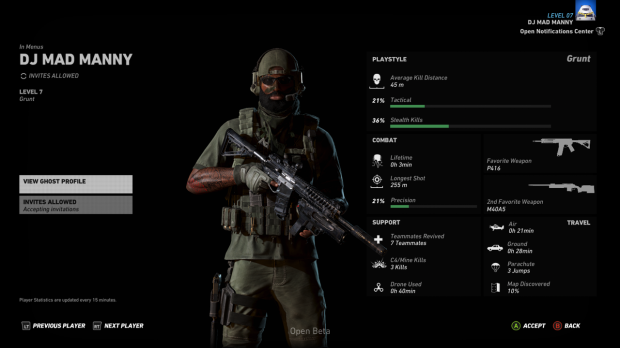 I played the game from beginning to end of the beta and was immediately sold on it–so sold on it that I went ahead and purchased not just the game, but the season pass. The game can be played both solo and co-op, but is best played with a squad of friends.

Overall, I had a fun time playing the open beta and can’t wait until the full release on March 7th. The game will be available on Xbox One, PlayStation 4, and PC.