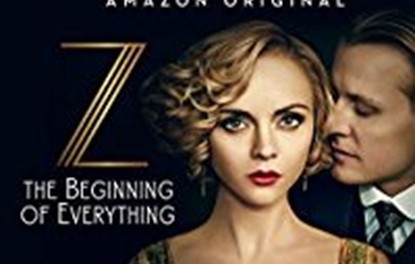 Since the success of the British period drama Downton Abbey, television has produced a seemingly endless stream of historical dramas. Most of those dramas are fictional tales, giving the viewer a slice of life of the era.  Z: The Beginning of Everything is a little different.  This period drama is the biography of Zelda Sayre Fitzgerald, wife & muse of author F. Scott Fitzgerald. The series is based on the novel Z: A Novel of Zelda Fitzgerald  by Therese Anne Fowler, which details their epic love story. The full 10-episode series is released on Friday, January 27th on Amazon Prime.

The pilot, released in November 2015, picks up on Zelda’s life just prior to her introduction to F. Scott. Christina Ricci plays the 1920s southern belle/flapper with perfection. She is strong willed, rebellious, and sexual. From skinny dipping with her friends to sneaking out to party with soldiers, she will not conform to the life her father had planned for her. The story is told from Zelda’s point of view, which departs from the typical male-centered point of view. The costume and set design are flawless: these spaces existed just as filmed in the 1920s. The language and use of slang is seamless.

With no explanation from Amazon, we’ve waited just over a year to watch this series. I hope and pray the series will be worth the wait.