With bodies on the ground and standing tall, Kevin Owens made sure to let people know that he is the man in charge of RAW.

Roman Reigns opened the show which led to Paul Heyman coming out to speak on the behalf of Brock Lesnar, per usual. Then JeriKO (Chris Jericho and K.O. for those who don’t know) walked out and soon they were followed by Seth Rollins and Braun Strowman. With all of these men in ring, squaring off, Brock Lesnar’s music dropped and the Beast Incarnate walked down the ramp. While everyone’s eyes was on Lesnar, Sami Zayn came out of NOWHERE and leaped on Strowman’s back; putting him in what appears to be a weak headlock. A brawl broke out with every many taking out their rival, leaving only Lesnar and Strowman facing with Braun bowing out to Brock. Was this a hint of a possible match later down the line? Who knows, but I would be love to see it!

A 6-man tag team, made from 6 of the 7 men from the opening promo, pushed the rivalries between the competitors involved. Brock Lesnar of course wasn’t involved in this. His eyes are set on Goldberg and Goldberg was not in the arena. It was Roman Reigns, Seth Rollins, and Sami Zayn versus JeriKO and Braun Strowman.

The match went off without a hitch, and I’ll have to say…seeing Zayn paired up with Seth Rollins and Roman Reigns was exciting! He messes so well with them, especially with Rollins; even though his little joke about being the new 3rd member of The Shield was cringy at best. 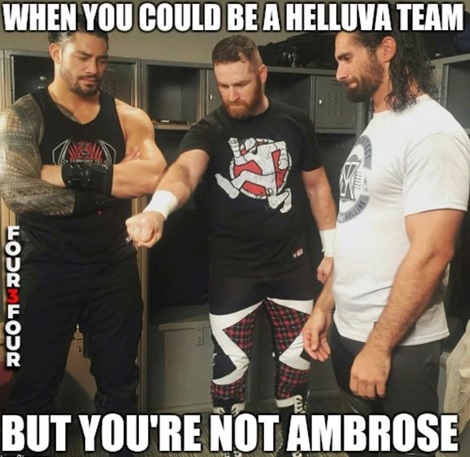 Even Zayn squaring off with Strowman was fabulous in comparison to the last time these two met in the ring in the Last Man Standing match 2 weeks ago, but Strowman proved yet again that he still has what it takes to throw Zayn across the ring and then some.

In the end, Strowman slammed Zayn and pinned him in the middle of the ring for the win. The match was over but Strowman had more destruction in mind. This led to a battle to take down the big man and only 1 man of the 6 was standing.

With K.O. standing proudly over Reigns, after slamming him through the announcer’s table, what does this mean for their storyline? Is Reigns going to be the new champion or will the powers that be keep K.O. as the champ for awhile? I personally want to see K.O. retain his championship at the Royal Rumble, but who knows. What do you guys think? Let’s talk in the comments!

Monday Night Raw airs every Monday at 8pm EST on the USA Network.