‘Tis the season! Everyone’s throwing their Christmas specials up on TV, children’s Christmas books are on the shelves once again, and us comic nerds are enjoying our holiday specials! And of course we’re waiting for one of the most powerful mutants in the 616 Marvel Universe to bring our gifts, or coal… That’s right! 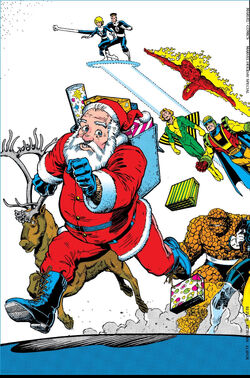 Santa Claus is one of the most powerful mutants in the main Marvel continuum. His first appearance was in Strange Tales #34. However, he appeared in an X-Men comic in the early 90s’ as a way to entertain the idea of how Santa could possibly be capable of the incredible things he apparently does every year.  In the comic, Cerebro recognizes Santa as the most powerful mutant ever registered. In this comic, Santa displays a few of his abilities, such as changing objects (or people) into other objects and wiping memories.

More recently in Marvel comics, Santa Claus met the Illuminati. This comic had an interesting (kind of weird) story featuring the Infinity Gauntlet, Iron Reindeer, and a battle between earth’s mightiest heroes and Santa Claus.

So there are a couple of  “men in the red suits (no, not Deadpool)” appearances from Marvel’s side, but what about DC?

In a Constantine comic book, Constantine used St. Nicolas’ crushed bone powder for a ritual, then he proceeded to snort it like cocaine and joke about a white Christmas. There was also a Lobo Christmas special where the crazed bounty hunter tells a tale where he was hired to kill the “Crusher Kringle”.

Lobo claims that he decapitated him. So… I think it’s fair to say that DC’s take on Santa Claus is a little more, er morbid. Santa Claus also appeared in various Detective Comics, Action Comics, and even an old Super Friends issue.

There was a comic produced by Boom Studios last year, written by Grant Morrison (yeah, that Grant Morrison), with art by Dan Mora, Klaus. Klaus tells the bad ass comic book origin of Santa Claus through out a six issue mini series. This was a thrilling series with great art, I recommend you pick up the trade if you can.

What do you prefer, Marvel’s fun take on Santa as one of the most powerful mutants? DC’s marginally darker take on him? Or Grant Morrison’s festive origin story?

I'm a fifteen year old writer and artist, living in West Virginia. I also study film and work on film projects as often as I can.

1 Comment on Which Comic Book Santa do you prefer?