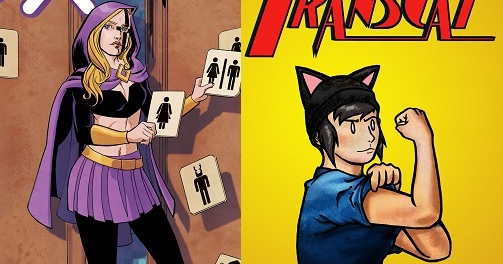 California-based publisher Stacked Deck Press is taking a leap forward for the recognition of trans writers & illustrators. The company has put out a call for those in the trans community to show off their writing & illustrating talent, in a new anthology called We’re Still Here.

In an interview with Newsarama, co-editor Jeanne Thornton stated, “We’re hoping to include a whole bunch of contributions by as-yet-unknown trans cartoonists, as well as to promote wider awareness of those already working at a relatively high professional level. I think this is a significant project for indie comics, and for comics in general.”

Even though the comic book industry has made such great strides for LGBT inclusion, there has still been some lag when it comes to the trans community. Very few trans characters & creators actually take off (I mean, Loki Laufeyson is actually genderfluid, so there’s that), and that’s a real shame considering the great pool of talent out there. That’s where We’re Still Here is hoping to make a difference.

Earlier this year, Alters (a comic by Paul Jenkins) became the first mainstream comic book to feature a main character who happens to be trans. While going through her transition, the superheroine Chalice discovers that there was one little…side effect to the procedure: the ability to manipulate gravity in order to fly. The comic’s themes of marginalization also follow the vein of the early X-Men comics, when the books were more of a thinly-veiled allegory for the racial tensions at the time.

While being interviewed by the website Out, Alters colorist Tamra Bonvillain said, “So many times in the past, we’ve been represented as throwaway characters, and even a lot of more recent positive trans characters are in minor roles.” This is why having a character like Chalice is so important. It’s about representation of a minority group, who have a lot to offer to society.

The call for submissions also notes that the work of trans people of color will go “to the front of the line”. The work should intersect the trans identity in some way, but Stacked Deck Press says that the call is open to all themes, including: “horror comics, sci-fi epics, romantic doom comedies, political thrillers, [and] generational sagas.”

Stacked Deck Press does stress that all submissions should be new (instead of reprints), and that they are accepting work that is between 1 and 8 pages long.

If you, or anyone you know, would like to send in a submission to We’re Still Here, the deadline is January 9th, 2017. Join the ranks of such talented artists as Sophie Labelle (Assigned Male), Morgan Sea (Misgendered!) Knave Murdok (TransCat), and Christine Smith (Eve’s Apple). Interested parties can check Stacked Deck Press’ website for more details.