Recently, it was reported that The Great Wall, starring Matt Damon, will be releasing in China later this month and in the US in February 2017. What has been interesting, is there are people (including Damon himself) who are trying to discount that the movie is whitewashed.

Damon’s character is that of a British mercenary tasked with helping Chinese people deal with a monster threat. Many have gone into the weeds about whether or not this is whitewashing vs. the white savior trope, as Damon is playing the lead role. Regardless of which way one wants to argue with the details, the bottom line is that this movie production brought Damon on board in order to “bridge the gap” between Western and Eastern movie goers, and of course to help bring in dollars.  Many will still argue that it takes away from the movie’s credibility if the movie’s producers from Legendary (the same people who brought us Christopher Nolan’s Batman trilogy), Universal (who will distribute this movie worldwide), China Film Group and Le Vision Pictures would rather cast a white American lead rather than get a much better qualified Asian actor instead. At a budget of $150 million, will it do well with the controversial choice?

If history is any indication, no. This movie will not do well and will probably be DOA upon arrival on these shores. The only difference may be how much it will gross in China since that is the place of origin. However, let’s take a look at several big budget movies that have completed their theater runs, that either have been whitewashed or followed the white savior route and see if they were a commercial success in the States and whether or not they were actually any good.

For many, The Last Samurai is the measuring stick of the modern white savior trope.  While the movie went on to rack up over 300 million worldwide, it still had the stigma of what happens when one random white guy (Tom Cruise, of course) is tasked with saving a culture that he knows little about. A drunk military American saving Japan?  No.

I have to give credit where credit is due.  I liked the plot of the movie, as I thought it was very well thought out.  Critics reviewed it positively as well.  What was NOT thought out, was why a movie based on a Japanese novel cast white people in the roles that were written as Japanese, Native American and Brazilian-Japanese.  So, can someone explain how a movie with bankable stars and positive reviews,  bomb in the box office in the US but did so well in Japan?

As an anime that was one of the first to put anime on the map in America, you mean to tell me that there were NO Asian leads who could have been cast for this film? While the movie was visually stunning, the story was absolutely horrible, but then you would be hard-pressed to find a live action anime that has done well in America.

Depending on who you talked to, the Wachowskis were attempting to take humanity beyond gender and race in the movie.  Again, even if you factored out the controversy of whether or not there was yellow facing in this movie, the convoluted plot did not help matters either.

Emma Stone plays Captain Allison Ng, a character that was written to be part Chinese and part Hawaiian. Let that one sink in. At least Emma admitted that her casting was misguided.

M. Night Shyamalan said in an interview, “Anime is based on ambiguous facial features. It’s meant to be interpretive. It’s meant to be inclusive of all races, and you can see yourself in all these characters.” Too bad he couldn’t be bothered to include other races in the leads for this movie which bombed hard at the box office.  Dear Mr. Shyamalan, casting other races as extras does not make it a ‘multicultural’ movie. 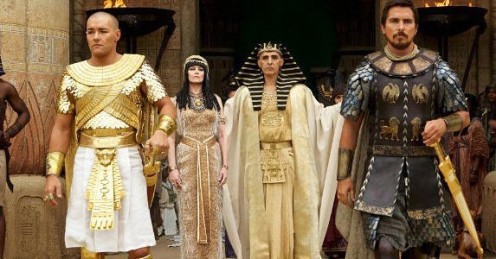 Your leads are an Aussie playing a Pharaoh and a Brit playing an exiled Jew. Oh, and it’s a religious story based on biblical text, yet the religion part (you know…GOD)  gets left out.  Let’s also remember, Ridley Scott said this and Christian Bale backed him on it, “I can’t mount a film of this budget, where I have to rely on tax rebates in Spain, and say that my lead actor is Mohammad so-and-so from such-and-such. I’m just not going to get it financed. So the question doesn’t even come up.”  Right…sure.

Speaking of Egypt, a movie about Egypt, set in Egypt and yet none of the lead cast members were of African descent. This movie was DOA upon release as the casting controversy killed this film long before release.

Prince of Persia: The Sands of Time

Rinse and repeat, a Swedish actor, a British actress and oh yeah…Ben Kingsley (because he is about as ambiguous of an Asian Middle Eastern actor you can get) are cast in a movie where no Middle Eastern or Arabian leads are hired. It stands as one of Disney’s biggest modern flops of all time.

While we are on Disney, this movie is yet another one of their biggest flops for obvious reasons. With a plethora of Native Americans that could have taken Jay Silverheels’ legacy and pushed it to new heights, Disney craps on it by hiring Johnny Depp. Not only was hiring Depp offensive, but his Jack Sparrow-ish performance  repulsive as well.

The Legend of Tarzan

Why are people still trying to make Tarzan movies in this day and age?  Has no one figured out that the entire idea of a white man becoming a legend in the African jungles and beating up baddies, who just also happen to be BLACK, is offensive? Let’s put Samuel Jackson in and it will be ok.  Sorry, no matter how much you polish a turd, it’s still a turd. By the way, did anyone know that Armie Hammer played a Russian in The Man from U.N.C.L.E. and that he was also in the controversial Birth of a Nation as well?

It’s painfully clear that movie companies still have not gotten the message that every time they cast a white actor into a role which calls for a person of color, it’s going to fail.  Even if the story is solid, in many cases, it will be a commercial failure.  If this trend continues, then there will be no surprises that The Great Wall and Ghost in the Shell will be commercial failures as well.

3 Comments on Whitewashing by the Numbers