How a look at the Twitter history of SNL newcomer Melissa Villaseñor changed enthusiasm to disappointment.

It’s been an odd few weeks leading up to the Oct. 1 premiere of Saturday Night Live.

And the announcement was celebrated across the internet!
Ok, not so much celebrated as it was met with cautious optimism.  After all, This is SNL’s 42nd season.  That’s 42 years of non-Latina actors playing Latina characters.  Why does that matter?  Because giving people the opportunity to represent themselves in their own narrative means letting jokes, sketches (and, yeah, even stereotypes) be told through their own voices, instead of being lampooned and characterized from outside points of view.

And Latinx people not being a part of the narrative has meant four decades of portrayals of Hispanic and Latin American characters by white and sometimes black actors — some so stereotypical and unimaginative to have drawn ire for years, including from, of all places, the National Review. There has been little representation for the men either.  Of the 145 cast members since the show began, only two Hispanic performers: the underutilized Horatio Sanz and the sometimes-frustrating Fred Armisen, have been repertory performers.

And while the move could be considered a response to the criticism from Hispanic groups following the appearance of presidential cantidate Donald Trump on SNL last November, the announcement was still welcomed by many, regardless of the motivation.

However, less than two weeks later, Villaseñor has found herself in her own Trevor Noah moment.  She is under fire for her Twitter account, where just prior to her casting announcement, she made private, then deleted somewhere near 2,000 tweets.  Some were sceeencapped before they were wiped.  And like Noah’s, they run the gamut from insentitive and puzzling to downright racist. 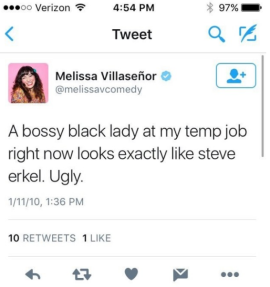 These, and a large number of Tweets like them, read like what they are: the verbal diarrhea of a young 20-something comedian trying and failing at being provocative and funny, back when Twitter was new.  But Villaseñor, now 28 and presumably more self-aware, has yet to address the criticism. So, too, has SNL.

As an audience member and a fan of the current crop of talent, I will be watching (a little less hopefully) to see if she can step up to the responsibility laid before her, and see if she can avoid perpetuating the show’s problem with Latinx characters.

SNL and its creator Lorne Michaels have been taken to task before for the show’s lack of representation in casting, most notably, the lack of black performers and writers.  But here’s the upside: when SNL has dared to listen to outrage and address concerns with self-awareness, the result has been writing and performances that no cast before could have ever pulled off in the show’s previous, overwhelmingly white, male-dominated eras.

Last season may have been hit and miss, but female performers are coming off some of their best SNL seasons in history as far as I’m concerned.  Following the 2013-14 mass exodus of long-in-the-tooth male cast members Samberg, Sudekis, Forte, Armisen and Hader; and after finally getting out from under the pointlessly large shadow of Kristen Wiig, SNL’s female crew became a dominant ensemble. No longer relegated to sexy sidekick roles or the standout “oddball” female caricature (see also, Molly Shannon), their sketches showed an overdue perspective, and quite often a hilarious sense of sexual agency in digital sketches that were every bit as awkwardly honest and dirty as anything The Lonely Island ever gave us. (Check out Twin Bed or First Got Horny 2 U.)

Never before on SNL would we have seen last year’s biting and brilliant sketch, “The Day Beyonce Turned Black” or 2015’s “28 reasons.” I barely remember an SNL era with more prominent female voices and POC representation that aren’t just token. Probably because there wasn’t one.

Sadly, that lineup has already lost a major player with the puzzling departure of Jay Pharoah, who took with him pretty much all of SNL’s best celebrity impressions in recent years. I’ll miss him this season, and whatever is behind his departure, I can’t help feeling like it’s a step back for SNL.  And where I previously had hope for fellow impressionist Melissa Villaseñor , I now worry that the show is taking another step back with a cast member that isn’t just “Not Ready For Prime Time,” but isn’t yet ready to be a voice for diversity, understanding and change either.