Interested in Valiant but need a place to start….the Valiant Handbook is your friend

Being a fan of comic books is hard. Every hero and villain has their own complicated story and history. If you’ve only recently discovered a character sometimes there is no really great jumping on place. One of the reasons I became a DC comics fan was Who’s Who, a massive dictionary that contained the histories of every DC character. A handbook is no substitute for reading the actual adventures of a character, but it can serve as a great introduction. Valiant is a relatively young comic book company, having only returned to publication in 2012, but they have covered a lot of ground in four years. Whether you’re a new fan or like me, some who’s been reading Valiant since they relaunched, but can’t remember everything, the Valiant 2016 Handbook is a good resource.

The absence of the traditional comic pop up boxes makes the Handbook useful. The Handbook does an excellent job of noting Obviously a lot of this information is available on the internet, it is nice to get this information from the publisher along with what trade paperback Need to figure out why the Shadow Seven are such an problem for Ninjak, it’s in there. Want to understand why Toyo Harada might be the most compelling villain in comics right now, see page 24. From significant locations to the major characters and supporting casts everything necessary for understanding the Valiant Universe is covered. 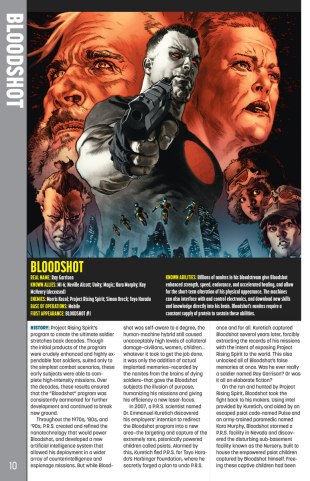 My one genuine criticism of the Handbook is that there was a chance to do more. The East of West one shot “The World” and the Lazarus Source book both provided readers with additional information that was not included in the actual series which further developed each respective universe. If Valiant had done something more creative like “The Harada Files” and explored its characters from the viewpoint of one of its major villains I think it would have added more to the book.

Ultimately the Valiant 2016 Handbook does its job of giving readers all the information necessary to enjoy the characters from one of the best publishers currently making comics.

Three out of Five Stars.