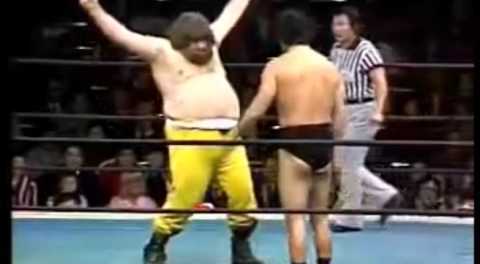 Welcome back to Great Moments in Championship history. After a week breather, I’m back with a somewhat unique topic in the wrestling world. While there are countless crazy and significant moments in wrestling, few are as overtly mystifying as a shoot match or situation. In that topic, few matches, or people really, are more famous than that of The Great Antonio, and his matches with Rikidozan and Antonio Inoki in Japan.

A bit of a primer to go into this piece, a shoot in professional wrestling terms, is basically anything real that happens in the scripted world these characters live in. One famous example is seen in WCW (where it still remains unclear on who was playing who) when Jeff Jarrett, commanded by a frustrated head writer in Vince Russo, laid down for a bewildered and pissed off Hulk Hogan, who proceeded to go on a tirade against the company. In some rare instances, actual matches get to be put into dangerous shoot situations.

The reason I put these two moments together is simply for the sake of having enough content for you readers to watch. The first of these matches, Great Antonio v. Rikidozan, is, in fact for the NWA Championship. The match against Inoki a decade later, however, isn’t for any seeming Championship, even though Inoki holds up a trophy at the end of the match.

To give a slight background, first on Great Antonio, he didn’t have a massively noted wrestling career, being significant in the territorial, almost here say era of wrestling. He was a fairly large figure in Stampede Wrestling, Stu Hart’s Calgary based promotion, but is better known for being a strongman and all around eccentric. Rikidozan, on the other hand, is a Japanese wrestler of some renown. He transitioned from Sumo to being one of the biggest names in Japan, and the world, by having incredible matches with the likes of Lou Thesz and The Destroyer. The event surrounding his death in 1963, not long after this match with Great Antonio, is straight out of a movie, and eerily reminiscent of the death of Bruiser Brody a few decades later. Rikidozan, becoming a known figure to the Yakuza both in wrestling and in the nightclubs he owned, was stabbed with a “urine soaked blade.”  Legend has it that he didn’t seek immediate medical attention, rather he threw out the Yakuza sided killer and continued to party. Needless to say, wrestlers of this time, both American and and International, are mythically tough.

In the wake of World War II, wrestling in Japan saw a lot of beating up on gaijin, or white outsiders. Take that as you will now, but wrestlers like Rikidozan made a name doing this. In a bout in the early 60’s, Rikidozan was scheduled to take on, and defeat, Great Antonio. At some point, Great Antonio decided he didn’t like that plan, and if you watch footage from the extremely short match, you see him come full boar at Rikidozan, who becomes noticeable confused and angry. Before it gets too out of hand, Great Antonio is thrown out of the ring, the ref rings the bells, and that’s that. Even though it was incredibly awkward, everyone seemed to have walked away unscathed right? Nope. Later that night, it’s thought that Great Antonio was assaulted by Yakuza gang members, angry at that outcome. Yakuza, at this time at least, had deep ties with wrestling in Japan, so there’s always that thought in your head.

When you look at that match, you think, while maybe that’s odd, shoots occasionally happen. Also, there’s something to be said about big men and more or less bullying their opponent if they’re unhappy. Andre The Giant, one of the most famous wrestlers in history, was notorious for beating people up pretty badly if he didn’t like them, or the prescheduled outcome. Even though The Great Antonio was no Andre, he was a behemoth of a man, and became even more so a decade later when he fought Antonio Inoki.

Without getting too bogged down with Inoki history, he’s one of, if not the biggest wrestler in Japanese wrestling history. He famously fought Muhammad Ali (in a fixed(?) match), and almost every big name in wrestling at his time, from Sammartino to Ric Flair. Also, he is the founder of New Japan Pro Wrestling, one of the biggest promotions in Japan.

When Inoki and Great Antonio met, it was the end of Great Antonio’s career (this was his last match), and he was in pretty horrific shape. That said, the Japanese wrestling scene tends to love their monolithic monsters, so this wasn’t atypical. The match immediately starts oddly, when it became clear that Great Antonio wasn’t going to sell any offensive from Inoki. While incredibly awkward for a few minutes, it really hits the fan when he starts clubbing Inoki, sloppily, and ends up hitting Inoki in the neck. What followed was a clearly shoot beatdown by Inoki, who took Great Antonio to the mat, and kicked him into a bloody pool of unconsciousness. It’s a pretty rough sight, as we rarely see an obvious fight like that in a scripted sport. The crowd becomes noticeably quiet, as would anyone when their fiction becomes suddenly all too real.

Wrestling shoots are always painfully awkward, but extremely fascinating. The moment it becomes painfully aware that we are getting that rare peak behind the curtain, the closer we inevitably pay attention. Whether it’s these matches, or the famous Montreal Screwjob (get ready for that chapter), the surrealness of the moment seems overwhelming. That said between the Mass Transit incident in ECW and the death of Owen Hart at Over The Edge in 1999, these scripted shows always have an air of danger to them. That could be what fascinates us, and in a world where WWE and other promotions use these moments of reality to their advantage, sometimes scripting moments for it themselves (see my first post on CM Punk’s Pipebomb, the was a “workshoot” promo), it certainly is a factor to have us tune in every week.

(If you want more about shoots, I’ll be sure to touch on some later, but also check out Dave Shoemaker’s excellent series of shoot moments on the now defunct Grantland)

Born in Philadelphia and currently residing in Portland OR, Brett has been reading and collecting comics in some capacity since 2008 and is now fully immersed. Also, Brett is an avid follower of Professional Wrestling since the crumbling of The Alliance. Philadelphia/Chicago Sports consumed here.
Follow Pop Culture Uncovered on WordPress.com