So, just last week, I found out that the Nintendo 64, the last bastion of cartridge-based console video game play, turned 20.  Released in 1996, a year after the (literally) game-changing Sony Playstation, this little “console that could” had a few hiccups — starting with the fact that it was released with only two games available.  But it still managed to gain a following of its own, and eventually sold more than 32 million units.  Not too shabby.

So while the N64 may not be old enough to drink yet, we thought it was still a good time to look back on some of our favorite memories.

My N64 was the first console I bought myself.  I was in my very first apartment.  I didn’t even have my own bed at that point, just a couch and a TV, but that was all I needed at the time.  I am a man of priorities.  I had two games.  The first, Rogue Squadron, I will argue today, was the first decent console Star Wars game ever.  The flying engine, the great selection of ships, and … the sound! From the voice acting, music and sound effects, it felt and played like a Star Wars video game always should have.  I got my money’s worth out of that game, even if, looking back, flying the unlockable Naboo Starfighter became far less cool once I had seen Episode I.

Rush 2 was another N64 game that never once let me down.  And since I could choose to drive a pixelated replica of the first car I owned, a black 96 Mustang, (I think its in-game name was the “Stallion”) I felt an immediate connection to the game.  As a result of my brand loyalty, I probably won far fewer races than if my first car had been a Ferrari, I guess, (The Stallion is not that great, really) but that’s life.

Not every memory is joyful, of course.  Sadly, my N64 was also my first clear indicator that I might not ever be any good at first person shooters.  Goldeneye, Rainbow Six, even the underrated South Park FPS were instant reminders that I should stick to racing and Star Wars games to avoid public mockery.

To dig deeper in the 20th anniversary, I spent the week talking to friends about the console; and the more I talked or messaged with them, one thing became incredibly clear:  Playing N64, for a generation of us was more about socializing and friendly competition than almost any gameplay experience that came after.  More than one person found that the N64 was a gateway into those true adult friendships – the ones that start in a dorm room, barracks or first apartment and follow you through the rest of your life.  Nostalgia, I expected.  But life affirmations? That’s a bonus.

I figured it best to let their own words round out our celebration of two decades with the N64.

J.G. – When a game system becomes a part of life

My Nintendo 64 is what got me through my college years. My friends and I spent countless hours playing Mario Kart and Goldeneye. We settled disputes through WCW Vs NWO Revenge.

When I lost my job and dropped out of school, Ken Griffey Jr. Baseball got me through dark days. And when I dated a girl who took way too long to get ready, I bought another system just for her house and played South Park (since she would occasionally join in) or Smash Bros. The N64 gave us other greats like Perfect Dark and Rogue Squadron … but it also gave us Superman 64 and a game that was called Castlevania for some reason. But despite a few missteps, the N64 revolutionized gaming with its crazy controller and a focus on making games Fun.

The N64 was an important part of surviving college for a whole group of us.  I made friends with the floor below me at Penn State, and a few people had N64’s. Ryan had Super Smash Bros, and we collected controllers until we could play four at a time. But Ryan was cursed with a teensy tiny dorm room, so we moved all the setup to Mike’s room, which was enormous, with plenty of space for us to rotate through players.

When the game stopped being challenging, people started playing while upside-down, or snagged a classroom projector and played enormous-mode on the wall. (It was the honors dorm. What did you expect?) Mike and his roommate were not allowed to lock their room during that first finals week, because we needed the stress relief!

More than a decade later, Ryan, Mike and Jim were all guests at my wedding. Someone brought a Wii to the hotel (go figure) and they snagged me while I had time to kill after my hair appointment. “Smash?” asked Jim with an upward lilt in his voice and a classic eyebrow raised. I ran over for a game, hair in an up-do, makeup complete. Then I scooted back down the hall so my groom wouldn’t see me! 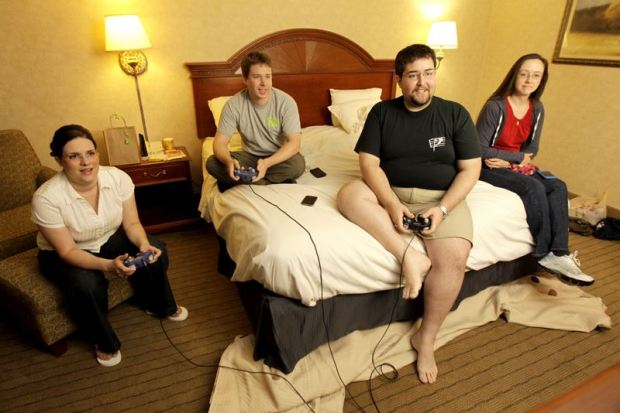 “The ceremony won’t start for another 11 minutes or so. We’ll be fine!” Photo by Julio Cortez.

Nintendo was shrewd in how they dressed up a “kid’s game” and turned into a virtual death match between friends. Sure, the cute characters made my mom feel better, but I loathe Toad and his snarky quips to this day. I’d spend days plotting how to slide my cart around corners and the optimal place to leave a banana so that it would create the most carnage.

Sure, there were racing games before the N64, but Mario Kart was different. These weren’t the same old static courses like Pole Position. It wasn’t just as simple as pushing down the gas and trying to ram into the person in front of you. You were competing against your friends, your environment and the game itself.

There was nothing like the pistol grip feel of the controller and the thumbstick that helped you navigate that wonderful world. While the graphics seem dated, they were plenty fine because the control was so precise and fluid. Almost 25 years after the last time I played the original version, I still have the maps memorized.

Ben C. – Discovering your obsessive side

I was never a completionist in gaming up until the N64. I’d play and beat games but getting everything was not that important to me. I usually just played for entertainment like most people, and would skip around if I could.

I was 13 and it was well before I had Internet; and someone told me that Yoshi was in the game and you get to ride him through the levels. Now, having already gotten the 70 stars to fight the final Bowser, I was confident to call Bullshit on that claim. But some time later, I looked through a strategy guide. I remember seeing the star that was hidden inside a stone cliff that you had to hit while launching from a canon on the mountain level – I never would have found that one! And sure enough, on the last few pages of the book there was Yoshi on top of the castle. So, I groveled for the 10 bucks, took home the book and began the systematic capture of each star. Reading, looking at screenshots, and trying to decipher what exactly to do was my life for several days to a few weeks. I especially remember hating how the camera would swing when I was trying to walk in a straight line like on snowy level. It was a long, frustrating process, but I was convinced I would get to ride Yoshi at the end of it all. I remember leaving the clock world for the end. The exact jumping required was a disaster, but it definitely made you feel like you earned those stars.

I can’t remember when I got the 120th star but I do remember instantly exiting the castle and jumping into the cannon to fly to the top. And yes, there was a full sized Yoshi and, yes he gives you 100 lives. But. Alas, there was no riding of Yoshi. It was just some urban legend floating around perpetuated by gamer friends of mine, which meant that all the people who said they did it had actually never gotten as far as I did. That was a cool feeling, because I did what others bragged about. I knew the truth.

Wanda – A soldier and her battling brothers

N64 definitely brings back some of the greatest memories of my life. Mom called it our ‘bonding’ time. I am 6 years older than my brother and this was one of few things we could enjoy together. He is still a sore loser, though.

My brothers are gamers.  We loved the Star Wars pod racing game. We loved all the different worlds and being able to change pods. For all our little lives this console played a very important part. My brother is now Special Forces… I don’t see him much.  But we actually still own a N64, and when we get together for family events we put aside our grown-up selves, all the stresses that come with those lives and just return to being kids. The greatest of twists…we can now bet with real money on who will beat who in the race.

Me: I love that you still play as adults

Wanda: Yes!!! We love it. It gets epic, real quick! I can kill with that Anakin. My other brother is a Marine. So it gets intense. But we have a good time. It’s pretty cool though to see how our kids keep that alive, too. My son is such a gamer. For him it’s all about the Avengers.

Me: He gets it from you?

Wanda:  From me and his uncles. His dad plays a little… I beat him too. I think that’s why we got divorced. He can’t handle me. Jajahaja.

Me: I should put that in.

Matt – N64: The beginning of the FPS phenomenon

When I think of the Nintendo 64, one game comes to mind: GoldenEye 007. I logged countless hours running, gunning and swearing inside the game’s immersive multiplayer mode.  For me, the ability to play my friends – and by play, I mean hunt them down, kill them and then mock them to their faces – was simply amazing.  Sure, I could play against buddies in Mario Kart, but beating Toad across the finish line with Luigi wasn’t nearly as exciting as sneaking up behind someone and taking him out with my Golden Gun.  Ah, memories.

So, these days when I fire up the Xbox or Playstation and play Halo or Call of Duty, I still think back to those GoldenEye days when a younger version of myself was hanging with friends, snacking it up and playing a game that would usher in the multiplayer craze that exists today.

Alisa – Ocarina of Time is LIFE!

The Legend of Zelda: Ocarina of Time was a game changer in the action-adventure RPG world. LoZ was already a staple, but this game just blew every game out of the water. This was the first Zelda with their “octagon” graphics and I still remember being scared of Ganondorf when he rode his stallion out of Hyrule.

This game has left an impression on my love for LoZ, and even when I play Twilight Princess or even Skyward Sword, you can still see the links back to Ocarina of Time, when it comes to gameplay, quests, fairies, tunics and so many more to list.

Me: You took that game seriously.

Alisa: That game is life!!! And when “Breath of the Wild” comes out, I will be dead to the world until I’m done with it.