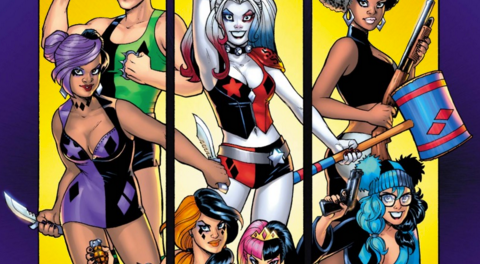 Oh my gosh! I thought I would be excited reading this, but I’m overly excited for the next issue. This is the best idea DC has come up with for Harley Quinn. First of all, there are so many different versions of Harley and different ways people cosplay her. It’s a no brainer to make multiple Harleys, but how they did this, wow!

Let me gives you a simple synopsis. This isn’t Joker’s girlfriend Harley Quinn, this is post Harley Quinn beat the snot out of Joker, Harley.  We already know she is not friends with the Justice League and is currently what we call an Anti-Hero.  She moved out of Gotham to Coney Island and decided she needed a team of her own people. She wants to fight crime, right some wrongs, and do it with her team for a small fee. She decides to enlist a group of like-minded individuals from NYC to be a party of her Gang of Harleys.

What’s great about her Gang of Harleys is that each Harley character is diverse and unique on their own.  Not only is there an array of different national backgrounds such as China, India and and Latin America, along with a range of body types for the women. My favorite is of course Harley Queens, who is the only girl out of seven children, from a Chinese immigrant family, and fabulously designed everyone’s outfits. I’m of course going to feel the need to cosplay her, she wears a crown! Also, men do not be afraid there is definitely a male Harley, Harvey Quinn.

The issue starts off with the gang beating up a Hipster Mafia.  Now don’t get me wrong this section of the comic is hilarious but hits some great points on the issues of gentrification. I always find it nice that comics can touch on social issues in such a comedic way. I couldn’t get over laughing at the sly commentary of soy milk, organic foods, and all-natural bee pollen mustache wax.  They beat the Hipster Mafia up pretty good, Harley using a secret weapon that will make you cry in laughter.

Now what’s really important is the section where Harley gets kidnapped and the Gang of Harleys and the other members of Harley’s crew are searching for her. This of course is Harley’s idea of testing out her new mates, but all in all her little test turned into an actual kidnap. The last page of the comic make me scream in both horror and just awe. I’m not joking I actually was yelling in my bedroom.

The art of course is pretty great, what you see on the cover is what you see inside. I really enjoy the details in the faces of each character and the color scheme for the Harleys. The artists do a great job on creating a different look and feel for each setting the characters are in. I like how the background and side characters of the comics have earthy muted colors, or simple backgrounds that allow the main characters pop out. Hard ink outlines with soft and well blended coloring make this art look well put together.

I feel like this will be enjoyable to all Harley Quinn fans, and a great comic to pick up if you just want something cute and fun. I think it’s also a great way to get more women to read comics.

5 Bangs out of 5, maybe I was too excited? But I’m telling you I want the next issue now.

Graphic designer, photographer, artist and cosplayer, I love all things kawaii! My anime watch list is longer than most. My favorite film series is actually Fast and Furious. I mean seriously who doesn't love fast cards, explosions and fight scenes?
Follow Pop Culture Uncovered on WordPress.com