It’s hard to believe that yet another Street Fighter game is being released and it’s still heavily anticipated by fans young and old alike.  While Street Fighter II was not the first game of the genre it was the most influential game which opened the flood gates for all that have followed.

Below is a list of some of the best games that have been released over the years and their influence in shaping the fighting game genre.

Street Fighter II: The World Warrior – Of course, one can’t talk about fighting games without talking about the king of them all.  In the early 90s, this game kept arcades full as we all tried to become the best at the Sonic Boom and Haduken.   Many of us may be disappointed that the newest iteration is exclusive to the PS4 but for those that don’t know or remember, when this came out for the home consoles, the Super Nintendo was the only system you could get it on.  I specifically got the SNES just so I could play SFII…and save a lot of quarters in the process.

Mortal Kombat II – The biggest rival to the Street Fighter series has been Mortal Kombat.  Back in the 90s, not only did this game have incredible graphics, but it introduced us to the most brutal fighting since Pit Fighter.  This franchise was the the one that paved the way for the ESRB and the ratings system that we have today.  So, why did I pick this one over the first? Because while the first one was very innovative, the 2nd one in my opinion vastly improved on the original with newer characters, the introduction to babalities, friendships and so much more. Not to mention stage specific fatalities as well. Let’s face it…at that time in terms of sequels, MKII was a huge improvement from the first as gamers had to wait until 1997 before SFIII dropped.

Tekken 3 –  The Tekken series in my mind is lauded as the game series that put the Playstation on the map.  It was one of the very few games that, on the home console, was nearly arcade perfect.  If you stood the console version side by side with its arcade counterpart, it was hard to tell them apart.   The series really didn’t hit its stride until Tekken III debuted.   Every character had 100’s of moves and combos, the ability to sidestep (which became just as important as blocking), and of course insane new characters.  It’s still one of my all time favorites.

Soul Caliber (Dreamcast) – O Dreamcast, how we miss thee. Between Soul Caliber and the Dead or Alive series, Soul Caliber remains as one of my favorite fighting games of the late 90s.  It had some of the best graphics of its day, insane yet deadly combos to pull off (Sidebar: a young lady I was dating at the time who was not a big gamer, mastered this in less than a month and was destroying me regularly…I think that’s why we broke up), and an excellent story to book.  The only knock was that the endings were not CGI but oh well. 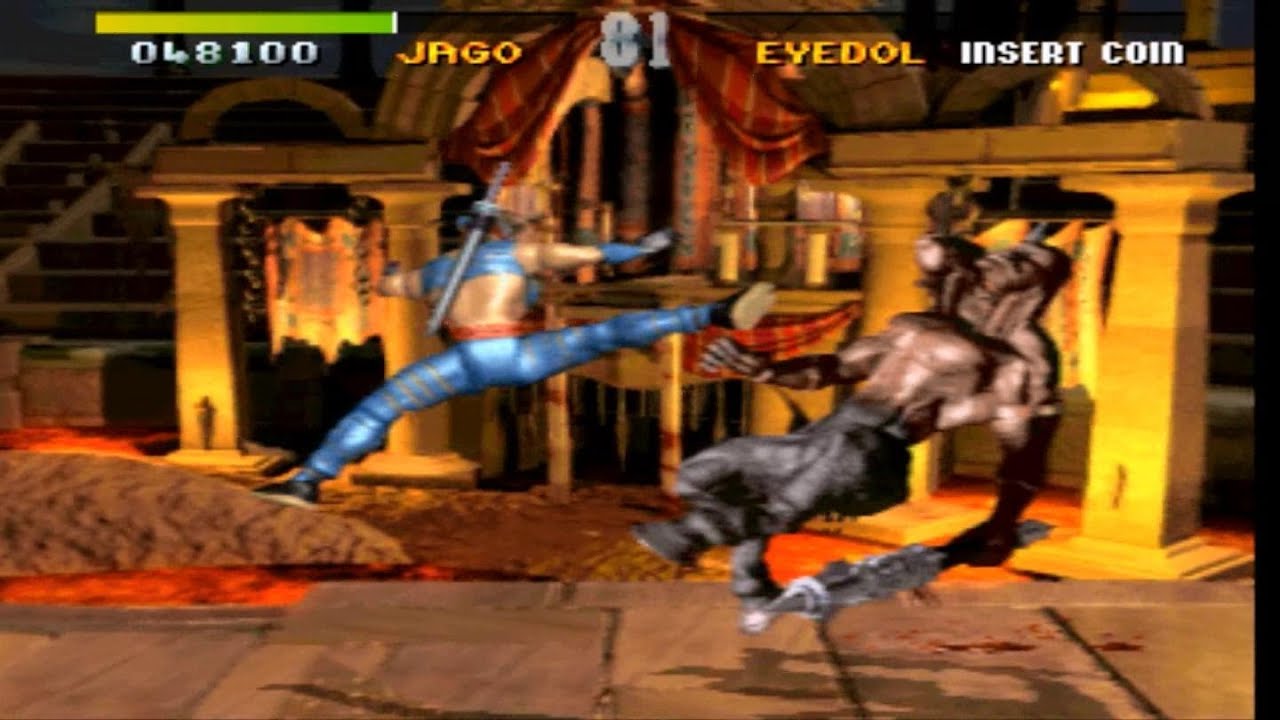 Killer Instinct –  There is so much to say about this game.  I will start with the fact that the home port was vastly inferior to the arcade version, yet I knew a LOT of people who got it anyway.  In undergrad, many of those same people skipped class just to play it, day and night.   With Killer Instinct the question was, what to add to a market that was quickly getting saturated with fighting games and still stand out? Simple: add a ridiculous combo system.  The game ripped shamelessly from others by having fatalities as well but Killer Instinct added auto combos, ultra combos and ultimate combos as well as combo breakers, which I think turned the corner for a lot of fighting games as other franchises from Street Fighter, Mortal Kombat and even Super Smash Bros, would later do  the same and improve upon combo systems. Love or hate this series, Killer Instinct innovated the combo system.

Marvel vs  Capcom 2: New Age of Heroes – Why does it seem like DC is always late to the party?  The Marvel vs Capcom series has been around for 2 decades and yet I don’t think DC came to the party in Mortal Kombat vs DC Universe.  Before then, Marvel and Capcom combined to bring us some of the best fighting games ever seen.  This entry felt like it took everything that made up the Street Fighter series and turned it up to a 10. The game introduced  Hyper combo gauges, variation combos, snapbacks and more.   You could even assist team members and heal some as well. But the graphics were some of the best of this series.  There was also an iOS version which as of now has been pulled from the iTunes store. If anything, I think this is probably one of the best 2D fighting games ever created.

Fight Night Round 2 – Yes, I know a lot of you probably forgot that there is an actual boxing franchise game out there and one who has lost its luster since the MMA has taken over but Round 2  was the best one of the series.  This was the game where you could answer the question of Ali vs Sugar Ray Robinson, Paquiao vs Mayweather in their prime, and so much more. At the heart of the game was the control scheme where players who were really good had to learn how to master the analog sticks to do most maneuvers.  One can’t forget the cut man mini games that happened between rounds either.

Ready 2 Rumble – Speaking of boxing games, Ready 2 Rumble was one of the best cartoony games to come along since the original Punch Out!!! series.  The biggest difference, of course, was that this game was in 3D and also allowed for 2 player support of (of course) trying to spell RUMBLE  in order to release your special combo move.  One item of interest was that the longer the fight wore on and the more damage you took, the harder it became to fight.  By the way, let’s not forget that Shaq and Michael Jackson were both in the 2nd game.