"I would never relinquish my sword for a ring." "For the right man you would." "The right man wouldn't ask me to." With that exchange, I felt completely better about Lionsgate's film adaption of Pride and Prejudice and Zombies. With two Walking Dead television series and a host of zombie films ranging from horror (Evil Dead) to romantic (Warm Bodies), I fear that we're well past "peak zombie" and that an adaptation of Seth Graeme-Smith's twisted novel would be nothing but cheap, derivative, and redundant with little to offer undead-saturated audiences. Fortunately, Pride and Prejudice and Zombies comes together into a mostly competent film which is diminished only by a lack of focus in the film's final act. 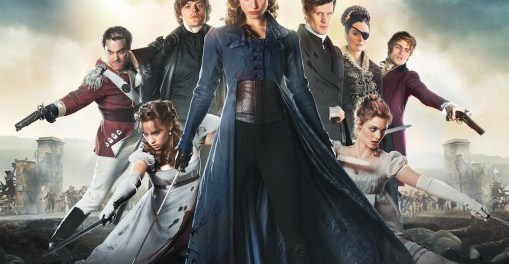 Pride and Prejudice and Zombies is a largely faithful adaptation of the novel (itself an adaptation of that Jane Austen book which bored you to tears in college) with the cinematic advantages of 1) replacing the lengthy expository text with scenery and action, and 2) providing both a backstory and a conclusion to the undead plague which the original novel lacked.

The film’s opening credit sequence explains–through late 1800s animated paper puppetry–how England came under siege by an undead plague purportedly brought over through trade with south Asia, leading to the country having to fortify London and creating a massive trench with only a single bridge leading to the countryside where our characters live.

Training in grace and manners was necessarily supplemented by training at oriental martial-arts academies, such that the young women of England’s upper-class families train in Shaolin fighting in addition to dancing and literature. Hence, when we reach the events of the story–an alternate Regency era where the last legs of society are fighting off a growing undead threat–viewers will be either surprised or delighted to learn that Austen’s original story is mostly unchanged. It still concerns the classic story of a young Miss Elizabeth Bennett (Lily James) whose family is increasingly concerned with marrying her and her sisters off to worthy husbands before their father passes. It’s just that Elizabeth’s reasons for refusing to be tamed are now supplemented–or enhanced–by her skill with a blade and her desire to suppress the undead threat.

A film like this necessarily has a difficult balance to strike between being faithful to both of its source materials and yet being appealing to modern audiences; between being too funny and yet too serious; between being a horror story and yet a comedy. The original author (that is, Graeme-Smith) played the story completely straight by keeping it tonally identical to Austen’s original work and simply adding the zombie and martial arts elements. Where this film could have gone completely wrong would have been in deviating too much from that and treating the story as yet another madcap comedy with excessive violence and cheap one-liners. Instead, the film maintains all the sense and sensibility (ha!) of the parody novel by also playing itself completely straight. Hence, British witticisms are peppered throughout the dialogue not for laughs, but precisely because they fit within the story’s nature as landed gentry drama that just happens to be set in a zombie apocalypse.

The upper crust British countryside and setting are appropriately given a funhouse mirror twist for the story. Stately manors and lush countryside still dominate the story, though the manors are now surrounded by wrought iron fences and barbed wire to trap the undead, and the fields and wood tend to be ugly and unkempt as they grow fat with rotting bodies. It’s evocative of the slow-collapse makeovers that The Walking Dead gives to its apocalyptic sets, which resemble our own modern world with the appropriate touches of social collapse. The story isn’t simply transplanted into early 1800s England, but goes to great lengths to convince us that it’s set in a Britain under an undead siege.

Credit, too, is to be given to the cast.  Lily James already has a background as a British aristocrat on Downton Abbey, so she’s a natural fit for the role of Elizabeth Bennett, even one who’s an expert fighter. Sam Riley is a relative unknown (his biggest U.S. role I can find is playing the raven in Disney’s Maleficent), but performs admirably as a “Colonel” Darcy who is an expert at zombie killing yet utterly befuddled in matters of love. Much of the rest of the cast does well, but James and Riley do dominate the bulk of the story to such an extent that the others remain background dressing. However, Matt “Eleventh Doctor” Smith also performs well as the ineffectual dandy Mr. Collins.

The film is not without flaws. One main difficulty is in the fact that the movie transitions among comedy, horror, and romance so frequently that it’s a little difficult to keep track of what the film’s genre is supposed to be. Often the interplay works well, but at times, it’s a bit jarring. The other problem is that the film takes significant liberties from the book by giving the zombies intelligence and even introducing a burgeoning zombie society which plucks at the characters’ consciences. One can hardly fault a modern action film for deviating from its source material (which is, in itself, a deviation from the actual source material), particularly since the story in Graeme-Smith’s book was driven by romance and the zombies were background material only. The new plot element does involve a deadly secret concerning one of the characters which, oddly, does remain (relatively) consistent with Austen’s original storyline. However, it does result in a typical climatic, apocalyptic battle which dominates the last quarter or so of the film. The result is a very noticeable tonal shift for the movie, with this romantic-horror-comedy suddenly becoming a romantic-action film for its last segment.

Still, the positive features of this film far outweigh the lack of stylistic focus. Coming out a week before Valentine’s Day, this movie makes an ideal date option for the guy who wants a zombie-killing action film and the gal who wants some Regency romance.

Score: Four truths-universally-acknowledged out of five.