If Jaws was the granddaddy of the summer blockbuster, Star Wars is the movie that firmly entrenched the ideology of big, sprawling, summer films on the map.

This is probably the hardest review I have ever written. It’s one of those “If I had known then what I know now” issues when it comes to one of the biggest movies to influence my life. I am attempting to write this as a way to reconcile my seven year old self who originally saw this on the big screen vs the person who nearly 40 years later has to revisit this. The idea is to attempt to write this review without biasing it, knowing what was to come next, so bear with me.

Oh and uh…there will be spoilers…

The seven year old in me was excited to see this movie when it was released as the hype for this in 1977 was as big as the anticipation is today. The opening credits was something new at the time but of course the eye candy that told me something big was going to happen was of course the Star Destroyer that just filled the entire screen.   Skipping ahead a bit, once the stormtroopers made their way on board Tantive IV and Darth Vader appeared, I was awed and scared at the same time. Vader wasn’t your ordinary villain. He was ruthless, driven and stopped at nothing to get what he wanted and this was apparent in the first few minutes of the movie.

The next two hours audiences were given a movie that, while simple in the tale that it told was complex in building a world that we have not seen in prior films. Mark Hamill’s Luke Skywalker is a young angst-ridden boy who dreams the dream that all young boys have which is going out and making his mark on the world (in his case however, the galaxy).   He gets his chance when he meets 2 droids who claim that they have a message for Obi Wan Kenobi, a former general in the Clone Wars which happened before Luke was born. Luke’s path leads him to become a pilot in a Rebellion and when he gets more than he bargained for, it comes down to Luke proving his worth by taking down the Death Star.

What made Star Wars such a hit was that it wasn’t a sterile, futuristic humanoid environment. Star Wars broke ground by fully realizing a place where humans co-existed with aliens in faraway places with technology never seen. Even though a good portion of the movie takes place on Tatooine, the creature cantina with its myriad of aliens set the bar on the credibility that such places could exist.   Another part of the story is that in this universe, there is still struggle. There is still oppression and there are people that will fight for basic freedoml.  Many of us could relate to that and still do today. Even without the later confusion that George Lucas causes us years later with Luke and Leia’s relationship, we have the story of a damsel in distress and 2 companions who has to choose between friendship or money and the sacrifices that all must make to stop the evil Empire from deploying the Death Star.

Now, the acting wasn’t the greatest thing in this movie, but this is what happens when to you take relatively obscure actors and cast them in a movie that no one sees as possibly being the next big thing. Of course, Alec Guinness to me stood out as he tried to be a guide to Hamill’s Skywalker, setting him on the road to learn about the Force. Mark Hamill’s Luke Skywalker…well he wasn’t Flash Gordon or Buck Rogers.  In hindsight, we are treated to watching his chracter grow over a succession of films as well as sadly, finding out where he gets his whiny-ness from. Harrison Ford for the longest time, wierded me out as Han Solo at least until Empire came along.  Han Solo in ’77 was always that guy you just kind of knew was a troublemaker but because he was a bit more grown up, you let him hang around to see the grown up stuff he did.  As a kid, I remember Carrie Fisher’s Princess Leia irritated me, and as creepy as Solo was, I echoed his sentiment about either killing her or putting her back in her cell.  Somehow with all of these sometimes less than likable characters, once they are together, you root for them as these are not the typical heroic archetypes: an old washed up general, a pouty petualnt  teen, a drunk his bud and Type A princess stroll into a bar…while their droids are left outside.  Bad things happen to the people who get in their way.

With the newness that was Star Wars, there is a bit of hokeyness to the entire story: mystical energy fields, a rebellion that we aren’t given a lot to go on against a generic sounding empire, and…the lightsaber duel. Despite all of this, Star Wars delivers because it ignited the imaginations of an audience whose next closest sci fi hit at the time was Planet of the Apes (still in my mind one of the creepiest dystopian futures I can imagine) and the sleep inducing 2001: A Space Odyssey (Yes, I said it! That movie bores me to tears). This was a movie that was easily accessible to anyone that saw it which is why I would believe that nearly 40 years later, the franchise is still a household name.

Outside of everything else, I think the make it or break it point for me with Star Wars was, surprisingly, the music.   John Williams’ score was just a perfect match for this movie. In my opinion, if Lucas had gone the direction of having Jerry Goldsmith compose the music similar to what was done for Logan’s Run, I don’t think there would have been much for me to latch onto. But everything about the music from the opening, to the Death Star run was magical and fit each scene perfectly. I remember at some point having the 8 track for it. If anything, John Williams’ music gave me an appreciation for orchestrated soundtracks and music in general. Even now, I have a playlist with all of my favorite music from the films and I eagerly await to hear the new OST.

To summarize, Star Wars was the movie that most kids fantasized about in the 70s: Faraway worlds, cool ships, princesses to save and aliens. It breathed life into our imaginations and by the time we got our hands on the toys, it created an obsession that nearly forty years later we are seeing that same wide eyed look in our kids and grandkids. While A New Hope may not be my favorite of the 3 original movies (that title is held by The Empire Strikes Back), it was the movie that sparked my imagination of wanting to fly the Millennium Falcon and wield a lightsaber. One would be hard pressed to find a kid who, in the 70s, didn’t dream of piloting that X-wing down the trench or have a friend like Chewbacca. Despite some of the dated effects and the tinkering that George Lucas has done over the years, A New Hope still holds up pretty well, as it’s the movie that has spawned many copycats since that May 4th day in 1977.

Just one last note before I go;  if there ever was a misdirection of where all of this was going, it shows in some of the original posters. A bare chested Luke Skywalker standing over his sister…

After all that, before you saw it, didn’t this poster confuse you? 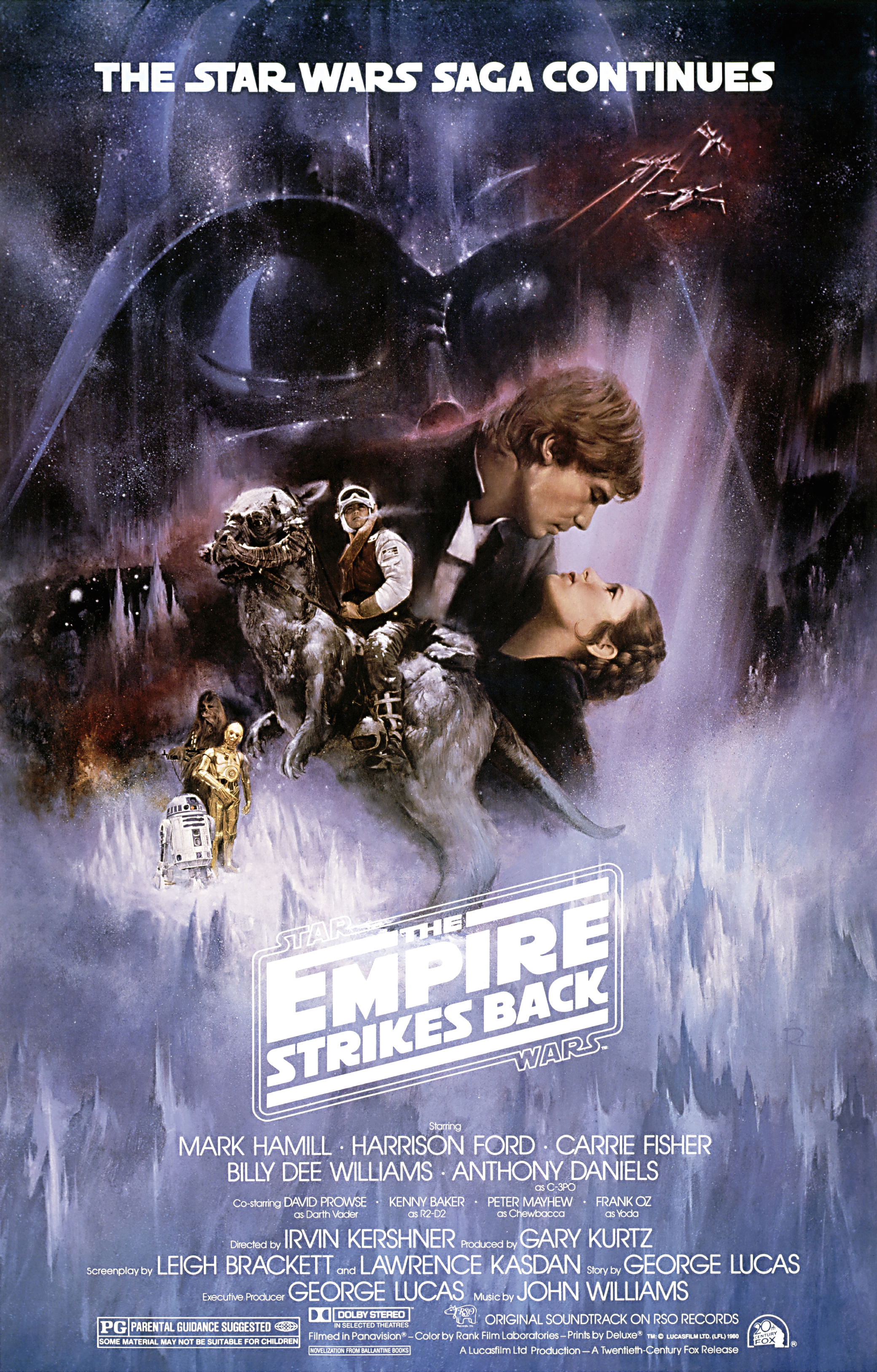 Stay tuned as we have more Star Wars goodness as we march towards The Force Awakens!