Each week, this crew will be putting together a list of books that few of the residents of Comic Book Lovers are picking up and/or may be thinking are books that are getting hot and deserve a look at. Please remember that while Comic Book Speculation can profitable, it’s all opinion and meant for fun. We have no abilities to know how exactly the market will react and this is something we like to have fun with. Please let us know if you enjoy this segment and we will keep it going as long as possible. Big Shout out to the gang in the Comic Book Lovers group for this segment. With that said onto this week’s picks.

Speculator Tip: SDCC blew up the internet this weekend with Theatrical Trailers of our favorite comics coming to the big screen and little screen. Some excited me, while others just were. One that just isn’t for me but seems to be making his fans truly happy is Deadpool. Yeah we all know New Mutants 98 will fire up beyond all control again ($300 average for NM on ebay as I type this), I mean we have been waiting for this haven’t we? What about that Dawn of Justice Trailer, seems to have put even some of the naysayers into my camp (The Dark Knight Returns #1 – 4 averaging about $100 in NM but have even hit as high as $200 recently) . Know what really piqued my interests? Star Wars!!!! I know there wasn’t even a trailer but the roll that they showed took me and every other Star Wars fan back in history. To what we saw as a simpler time, a time of Star Wars figures and vehicles all over our bed room floors. I have no speculative tip this week. Nothing for you to rush and find and hope you get a great deal. Hopefully everyone else will have lots of that. All I got for you is memories and nostalgia. I can direct you towards Dark Empire II #5 for the first appearance of the solo twins in comics, seems to be selling between $5-$10 over on Ebay, but really this week I think I’m taking a spec break and going to reminisce about the 80’s….

Book of Death #1 (side note don’t forget your copy of Book of Death: Legends of the Geomancer #1)

Speculator Tip:  When it comes to buying a potential key issue, don’t be afraid to ask. If you are unsure of what it is you are buying there are lots of resources you can hit including Marvel and DC wiki databases if you are collecting keys for those. For nearly every book made by both companies, you can find out all you need to know in one click. Dark Horse’s and Image’s database can be a bit hit or miss but it’s steadily improving. As for my speculator pick, you cannot go wrong with Chew. Chew has been one of my favorite comics for the past 5 years and with recent news that it’s becoming an animated feature, with David Tenant doing one of the voices, it’s causing the value to increase. If you are wondering what some of the key issues may be you may want to look at the following: Chew #1 1st printing runs ungraded are pretty hard to find. Chew #2, 1st appearance of Amelia Mintz, ungraded can run from 25 dollars and up, same goes for a 1st print of Chew #8 which is the 1st appearance of Poyo. As always, you can probably find it slightly cheaper if you know where to look but this book has been exceptional so far so don’t miss it!

Back Issue Pictacular: There were a lot of announcements and reveals this weekend…I am going to focus on the Deadpool movie this week. We all know about New Mutants #98, X-Force #2, Cable #3, etc…but the standout line in the trailer, in my opinion, was the introduction of Negasonic Teenage Warhead. Do yourselves a favor and grab New X-Men #115. There are two covers…the regular is the one with Wolverine ($2 average on ebay), Cyclops is on the variant ($10 average on ebay). Either one should be good to flip.

Back issue pick: T.H.U.N.D.E.R. Agents #1 published in 1965. Good old Hollywood has picked it up as a project for the future. Possible movie in the makes which means grab them now while they still go pretty cheap($10-$50 AVG FOR vg-vf was not able to find a NM price).

Back Issue: Amazing Fantasy #15 (1st Amadeus Cho, $50 avg. on ebay in NM). There’s been speculation for sometime that he’ll be taking up duties as the Hulk in the Totally Awesome Hulk. Also it’s speculated that his mother or sister already appeared in the MCU. (Dr Cho in AoU) it’s possible we could see him on the big screen one day. 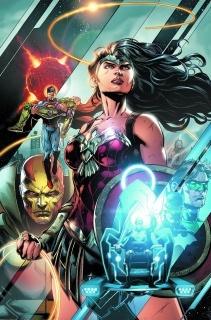