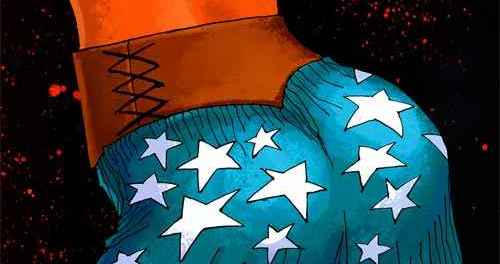 Sexism in comics has run amok since the first comic print. From the 1930s to 1980s, their male counterparts treated women in comics with the utmost disrespect. With the writers in charge of story arcs, artist, and costumes, it clearly displays this disturbing trend. For example, when Wonder Woman first came on the comic scene it was said that DC executives were worried her character would influence lesbianism in young girls. Isn’t that just rich?! A powerful, feminist character, couldn’t possibly influence young girls in a positive way? Wonder Woman was damned by the male community for being against the status quo of a subservient housewife. Their demographic was to target young boys and men by enticing them with male driven content. And if the women didn’t meet male standards she was ostracized. A female comic book character got the same treatment women in society received.

There is a strange level of discomfort that male writers and artists outrank female writers and artists. The current statistics are women make up 10% of the jobs in the comics industry. Apparently, that is an improvement to previous numbers. At least back then they were trying to uphold an image. Certain expectations were held for Wonder Woman as they wanted her to be “warrior ready”.  Wonder Woman has gone through a variety of looks, but her current transformation makes her a bit of a paradox. Wonder Woman has gone from this:

The art is beautiful, she’s not rail thin and the change may not seem like a huge deal, but I can’t help but think her outfit has shrunk over the years. The extra small leotard doesn’t particularly look warrior ready.

This does not stop with WW though. This is a trend with female characters across the comic industry (but mainly at DC and Marvel). Being a big comic book fan, and reading so many female lead titles, I have assessed that female characters with extraordinary power and endless abilities, become the sum of their parts. I am not a prude by any means and there is nothing wrong with female sexuality, but there is a line between being sexy and objectification, and it is crossed the line time and time again.

Let’s examine some of the costumes of some of comic’s most powerful women. While viewing these, I will ask a rhetorical question: Do these costumes look practical to you?

Let’s say these costumes aren’t to please a male audience, then what is their functionality and purpose? I understand these are powered characters, but do their breasts need to be bigger than their heads? Do they need to wear next to nothing to accomplish the mission? These pictures represent a very large problem in this business.  I mean how can anyone reading take this wank material seriously? Clearly, this is simply about what men want to see. Again this is a demographics game.

Which brings me to my next topic: comic ART . To start with, the best example is this inhumanly contorted, rear entry image:

The very famous Spider-woman photo left many people questioning the ethics of Marvel and comics in general. Not to mention the artist of this photo, Milo Manara, who is a known as an artist of erotica material. Manara thought this drawing was palpable for a front cover. Read how this man describes his thoughts on the female anatomy:

“It is actually a girl who is crawling, or rather, advancing at the pace of the jaguar. After climbing the wall of the building, she is pulling herself on the roof of this building. That’s how I see it. Sure, of course, since women are built in a certain way, any movement they make, if they are nude … and to some degree, more or less, all super heroines are naked.”

Huh?! I have never met a woman with a perfect heart shaped ass, that looked like she got her neck bashed in by a table. Unfortunately, I don’t think he is alone in his thinking. What he says seems more of the norm than anything else. This is why you get constant drawings of the giant breasted women with super thin waistlines:

Manara stands by his claim:

“It’s not my fault if women are like that. I’m only drawing them. It’s not me who made women that way. Look to the creator.”

My question is, WHY do Manara and other artists like him KEEP GETTING HIRED?! Despite all the back-lash from the Spider Woman cover, not only has Marvel gone and published this ugliness,

but Marvel has hired this Milo Manara again!

There are many writers that push the borders of female objectification, but none like Frank Miller. Frank Miller is famous for his gritty material, and ‘down to earth’ approach to comic story telling. Or rather he use to be. Somewhere along the line of his work, fans started noticing a trend regarding his female characters. Which seemed to always be written as full service sex workers, strippers, or cock starved sex kittens who can’t control themselves. He has never had a female protagonist that wasn’t half naked with the biggest tits and ass you can find.  Now, there is nothing wrong with women being sex workers at their own choosing, but there’s an issue when the common theme is women who love to “put out”. View for yourself:

Catwoman is a full service sex worker in this too in Dark Knight Returns and in Batman: Year One…and look at that bondage

Wonder Woman’s ass on the cover of Batman and Robin: The Boy Wonder

And the disturbing list goes on. There is no denying the man can tell a story, but what people are missing is that these stories fail women, and are totally at women’s expense. For some reason Hollywood and comic companies continue to work with Miller. There has not been much dissent or outrage about his work either. In fact, he is hailed as one of the best comic writers of all time. I guess in this in a male dominated career field I shouldn’t be surprised.

TRIGGER WARNING for discussion of rape in the following content

Lastly, I want to discuss one of the worst story arcs that haunts Marvel comics until this very day: the rape of Captain. Marvel. In 1980, writer Jim Shooter thought this would be a great in-depth story that fans would love. Before I go into what happened, let me just give you some insight into how powerful Captain Marvel is:

Her character has experienced many changes over the years, but there is no denying that Captain Marvel is in the top 5 list for most powerful woman in comics. However, Marvel would have you think otherwise. In Avengers #200, Marvel decides to make her a rape victim whom is incapable of stopping her own rape at the hands of a man who has very little to no power at all. How did Marvel’s most powerful female end up a rape victim?! Well Marcus Immortus built a date rape machine and under some type of hypnotic trance she succumbed to his sexual advances.

Only to have her memory wiped, in addition, to being impregnated after the rape. Her fellow Avengers explained to her what happened and in the end she felt as any rape victim would feel: used and violated. But again, in fashion typical of this type of industry, Capt. Marvel received zero support from her friends (The Avengers).

In fact, they were elated to hear about the pregnancy of this child and don’t seem to understand why she is unhappy.

Her initial reaction was that of feeling used, violated and betrayed by her friends the Avengers

But then out of no where her demeanor completely changes and she develops ‘feelings’ for her rapist, forgives him, and the rides off with him into the sunset.

Men have even gone on to argue that she must have enjoyed it to end up with Markus (the rapist) in the end. REALLY?! I understand comics don’t always reflect real life, but rape is not to be played with in this manner. Naturally, Marvel’s reaction was that of dismissal. They didn’t bother to comment on why they allowed this filth to be published. This disgusting point in comic history presents a pretty clear example of the attitude of toward female characters. They are inferior. That no matter how powerful a woman thinks is, there is always a man out there that can and will overpower you.

What are the solutions?

Well comics are (especially from the big two) moving in a decent direction, but not fast enough. HIRE MORE WOMEN! It’s clear the men have had issues with writing female characters. Even famed comic writer Gail Simone made light of this in one of her tweets where she pointed out that famous male writers seek her advisement on how to write for a good female character. The sad reality is that many writers STILL do not know how to do this. Maybe if females were written as human beings and not sex objects that would solve the problem.

The word feminism is being seen as a negative term by the uneducated. Bu the truth is we are not the man hating FEMINAZIS people think we are. Feminism is about creating fairness for everyone. If the major comic houses were willing to embrace feminism they could possibly change the way female characters are represented. Not only that, but be receptive to the fact that their audience isn’t composed of just men. They need to be sensitive to the fact that their romanticism of submissive female leads (or the complete and sudden diminishing of their powers when confronted with sexual assault) adds to the problems misogyny and rape culture cause.

The indies are small and are not necessarily focused on building long, drawn out story lines and as a result, they are more character driven. Indie comic houses like Image, Dynamite, Dark Horse and Valiant have better comic titles and better character development when it comes to their female characters.

I have noticed female characters are outside of the normal archetypes you have seen from the big comic companies. In addition, the indie circuit is more diverse and you get stories from a broad spectrum. Things are getting better, but its moving slower than it should. Hopefully, they speed up the process soon.

Writer, Critic, and passionate about comics, movies and equality on the big screen.