For me, that anticipation is over. I got a chance to read Star Wars #1 in its return back to Marvel and I must say it was good. I had much trepidation as to what could happen once it came back into the Marvel fold and still do as things could change as time goes by.   Jason Aaron’s writing accompanied by John Cassaday’s art gives me hope that if they can at least get one year out of this seminal franchise, maybe Marvel will take better care this time around.

I remember the Star Wars comics of the 70’s and 80’s. I even grabbed a few of my old issues to read back through and I must say quite honestly, the stories didn’t age as well as I thought they did. I think one of the reasons is,  the writing teams for much of the series, didn’t really know what George Lucas was really up to. Sure, they got their work approved from Lucasfilm but reading the comics and seeing what came to life in the movies showed that Lucas held a lot of cards to his chest.  Thus the creative teams were more or less left up to their own devices. Even if you read some of the early columns that Roy Thomas and Howard Chaykin wrote, they inferred as much. But as very young kids that some of us were, we got them anyway. We needed our Luke, Han, Leia and Vader fix. We kept rooting for Luke and Leia to hook up eventually until Lucas threw that serious curveball in 1983. We watched as the early books stumbled through Flash Gordon, pulpy-like (Thanks for the inference Pete!!) stories while we waited patiently for the next movie. We ignored the fact that somehow Luke found another lightsaber in between ESB and RotJ movies. We even tolerated the ridiculous looking rabbit Jaxxon who became a part of the Expanded Universe and is today featured on one of the many variant covers. Star Wars comics, under Marvel’s stewardship, didn’t get better to me until after the Empire Strikes Back. By then, we were introduced to the Tagge family, the Rick Duel Gang, the Mandalorians, and one of the few comics characters that made it into the new novels, Shira Brie also known as Lumiya. Many of the stories were good especially how Luke became enamored with Shira (even Leia showed a hint of jealousy!) and eventually was responsible for her turn to the Dark side. There were some really cool stories with Leia on her own such as Golrath Never Forgets (issue #65), and a few hokey ones including the prior issue called Serphidian Eyes (#64).   Even the issues with Lando going back to Bespin were fun reads. Once Return of the Jedi was released, it seemed that some of the stories were hit or miss. The threat of the Imperials was gone so the creators turned to trying to find a new threat to the growing Galactic Alliance. As we didn’t have multiple media outlets to keep things fresh, once Star Wars as movies, was done, some in my generation moved on from the comics as well…somewhat. 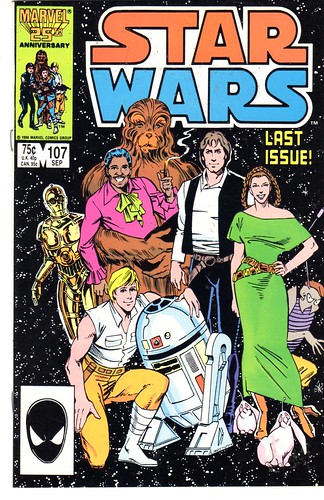 Of course the license for Star Wars comics would be taken over by Dark Horse in 1991. They would give us such things as Dark Empire I and II, Infinities, Rogue Squadron, Dark Times and Legacy.   Dark Horse in the 20+ years of having the license did a competent job of visually filling in the Expanded Universe that was more in touch with what Star Wars was about. In many ways they did a better job managing the Star Wars license than Marvel did. But the one thing I think Dark Horse missed was not having a flagship monthly comic that focused on the original characters throughout its time with the license. Thankfully Brian Wood came along when he did and in the last 2 years of Dark Horse’s license, gave us that book. Not only that, Wood’s works felt like it was the books that we should have gotten from Marvel. The story telling was tight and coherent and the early tensions right after Yavin that we never 100% got was there.

Now that Marvel has it back, issue 1 feels like it’s almost in line with Wood’s work. It picks up in the same era and instead of having the group spread all over the galaxy, the gang is all here. I can’t foresee where Jason Aaron’s story will go, but I am confident it’s in good hands. My biggest concern with Marvel having this franchise back is that it will get stuck in that era of post ANH and pre ESB for too long. Truthfully that is what I both loved and disliked about Wood’s run. While it filled in the gaps nicely between that periods, there still was so much more to the EU I wanted to read about. I wanted to see more stuff like Dark Empire. While I am satisfied with what Aaron and Wood is doing with this time period, there are infinite possibilities as to what can be done. Dark Horse took huge strides in stepping beyond the scope of Star War’s characters. I am hoping that Marvel can do the same but still have a book I can connect to about the original characters and this time around it’s not as hokey as what we were given nearly 40 years ago.