I always enjoy light party games, those experiences you can pull out for a few of your friends and play a game or two in an hour. All too often, however, these games become social deduction, trivia competition, or raunchy humor.

So, when you find a game that’s cooperative and thematic, without being drawn out or hard to learn, you may find your interest is piqued. That’s what happened when I encountered Ravine, a survival card game by Mathew Sisson and Stellar Factory.

You and your friends are survivors from a plane crash, trying to survive the wilderness until rescue arrives. You’ll need to forage supplies and build tools, but be wary because the wilds can drive people to insanity (and beyond).

Will you survive until you’re found? Will you succumb to the dangers of the Ravine? Will you be driven to the edge of madness? 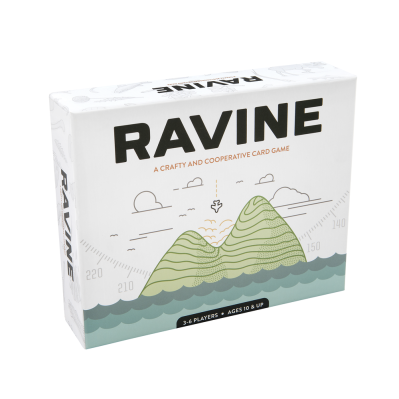 At its core, Ravine is a simple game of card drawing, resource management, and random encounters. Played over several nights (depending on difficulty), everyone must put themselves at risk to forage for the tools necessary to survive whatever is thrown at them.

Each round consists of four phases: Night, Health Check, Day, and Prepare.

If at least one player is alive during the Night phase when “The Rescue” card is drawn, the players win. If everybody dies before then, however, then the party (and the game) is lost. 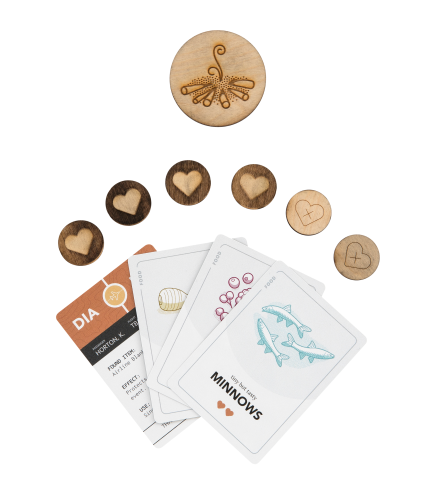 Setup is simple, mostly focusing on the number of Nights (difficulty) and handing each player a random Wreckage card. These latter cards represent survivors, which use the same rules but provide a unique one-time ability for that particular individual.

Each player starts with six Heart tokens (health), three of which are guaranteed full, and the other three determined randomly (how hurt they are after the crash). Should a player ever drop to zero Hearts, they are dead and most likely out-of-the-game (although the Ravine is a strange place).

During the Night phase (which is also how the game begins), a random card is drawn from the Night deck. This card may reveal encounters with animals, weather events, or other occurrences (or none!).

Depending on how well prepared the characters are (from previous phases), the Night card’s effects may be lessened or negated. Obviously, in the first round, the players are usually woefully unprepared and may need to rely on their once-per-game abilities.

The Health Check phase occurs next, affecting any character who only has one Heart token left. Those players must draw a Madness card, which may cause an immediate, temporary, or lasting effect for that player.

Madness cards might cause you to steal cards from other players, take increasing risks, or affect strange behaviors (e.g., only talking in song or having to dance). Many effects only end after you’ve recovered a Heart, although some may occur instantly or last for the rest of the game.

The Day phase allows players to push themselves to draw from the Forage deck, which can provide a variety of useful crafting items or food. Each player chooses to spend up to three Heart tokens to draw that many cards.

Players must not only be careful about how much health they risk, however, but also the dangers of the Ravine. The Forage deck also includes encounters (both good and bad) as well as mushrooms that can cause Madness-like effects (or even draw Madness cards).

Although each player draws their own set of cards, they may be willingly shared during the following phase. Players are not required to show their hands (i.e., “secret hoard”), however, although smart survivors work together.

The Prepare phase is when the survivors eat to refresh their Heart tokens and craft items necessary for the next Night. Food cards provide variable health but can be split among multiple players, as they share the dinner.

Wood, Stone, and Fiber can be used to craft useful items: Spears (to fight animals or other people), Baskets (to help with foraging), or Shelters (to protect against the elements). Wood is also necessary to start an evening Fire, which is also vital.

The game continues into the Night phase (and another round), with players continuing to survive and forage. Gameplay ends when either someone draws “The Rescue,” or everyone succumbs to the dangers of the Ravine.

Ravine makes for an excellent game for groups of friends looking for a casual gaming night. It supports 3-6 players and is very easy to learn, plus the Madness cards add a touch of “silliness.”

We tested it on multiple playthroughs and found that it was as suited for a trio as it was for a full table. While winning is likely depending on the number of Nights, tragedy (or success) fell on working together (and luck).

One criticism I have is the use of “madness” as a silly social mechanic, which is something I criticized in Mountains of Madness. As a mental health advocate, the use of mental illness as a schtick and punch line runs the line of insensitivity (or outright insult).

Although I understand the fun of portraying people who’ve been driven to the edge by hunger and worse, I wish there were a better way to represent this concept. Some of the Madness cards are tolerable (like a player stealing or hoarding things), but others are outright silly tropes of mental illness (like demanding everyone call you Captain).

My only other wish was that this game had a broader range in player count. Three player minimums restrict those who play solo or with spouses, while six-player maximums limit these games as authentic “party” games (where you might have seven or more people.) 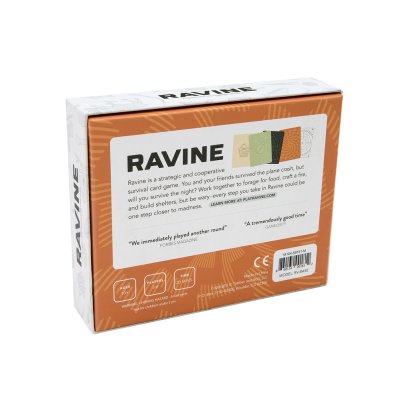 I think Ravine is excellent for your casual get-togethers with a small group of friends. The cooperative mechanics, changeable difficulty, and variety of Night and Forage cards provide decent replayability.

Solo and duo players, as well as large parties, might not enjoy this game as much. Also, the use of “madness” as a trope (and something humorous) may cross some people’s lines, although it’s not as egregious as some games.

This game may not satisfy more hardcore or strategic players, but I think it’s perfect for many gaming groups. If you have a regular game night, some friends coming over, or want to have some quick fun, then I recommend Ravine for your shelf.

I give Ravine a rain-soaked 3.5 giant squirrels out of 5.

(We’d like to thank Gamers-Corps in Ellicott City for providing us the space to play and demo this game!)