I’ve played many board games across multiple themes or topics, from science-fiction to fantasy to history. Tabletop games may be based on specific industries, words, and pictures, or even abstract strategies alone.

I have never encountered a board game that focused on relationships and drama until I encountered Hush Hush Projects’ Fog of Love.

Love stories are usually the purview of tabletop role-playing games, not board games, yet Jacob Jaskov somehow pulls it off. Fog of Love manages to bring a touch of storytelling to a game of romantic scenarios and tumultuous relationships. 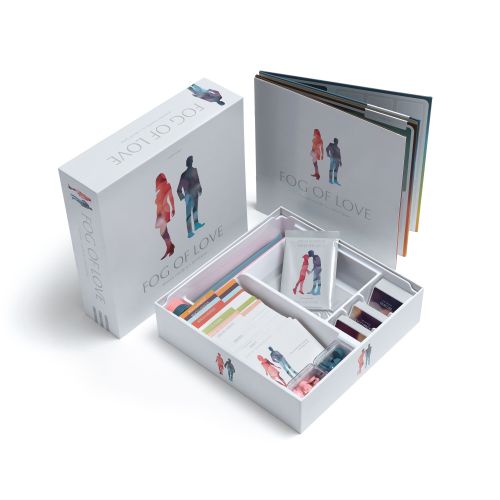 Fog of Love is a cooperative game for two players, where you portray two people trying to make love work. The goal is for each other to fulfill their destinies, preferably in a happy relationship.

Unfortunately, life is chaos, and not everybody is a good match.

For one, each player’s character is random, from their personality to their mannerisms to their job. Also, the story is guided not only by their situation but by the whims of each player.

The couple will encounter moments in life that can affect how they feel for each other, change their nature, and even their ultimate goals. Can you work together, balancing your own needs with your partners, or will you end up in an unfulfilling affair? 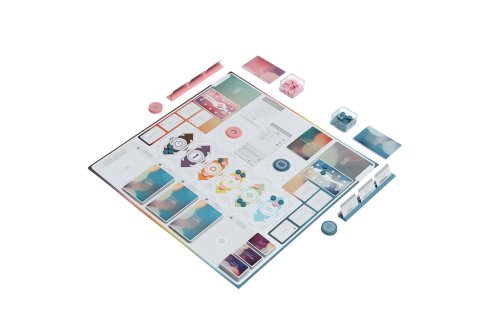 Each game of Fog of Love is played using a specific Love Story, a scenario that determines the general theme, unique cards or rules, and game length. You might portray people who just met and are starting with a Sunday morning date, or maybe you explore the tests of time for two high school lovers.

Character creation is a mix of choice and randomness, leading to each person having a Gender, Traits, Occupation, and Features. Players choose their Gender and pick Traits and Occupation from a small selection, whereas the other player assigns Features to you.

Traits are the most critical aspect, as these represent end-game goals that you’ll strive to satisfy during the game. One of the ways to earn Satisfaction and meet the requirements of Destinies is by achieving Trait Goals through your Personality.

The core of the game revolves around six Personality dimensions that represent you (and your partner’s) mindset and are influenced by your actions in-game. Players place tokens representing their general disposition, such as being outgoing versus reserved.

Initially, only a few tokens exist showing your Personality, but as the game progresses, more tokens will develop and show tendencies. This balance plays a role in fulfilling your Traits and Destinies, as actions that run contrary to either will lead to unfulfilling results.

The catch is that the dimensions aren’t solely for you, either, and neither are your Traits and Destinies. Many are shared, requiring you to think of your partner and achieve a cumulative balance that benefits everybody’s goals.

Each Love Story is divided into Chapters, during which players will have a hand of Scenes. As the scenario progresses, players take turns playing Scenes, which can range from Sweet events to Serious moments to outright Drama.

Scenes often take the form of choices, whether for the other player or both, and can affect Personality, Satisfaction, or both. Players indicate their choices using Choice Tokens (hidden until reveal) and then face the consequences.

Matching your partner may often seem the best course, often raising Satisfaction. Sometimes, however, it’s better to have differences, such as earning Personality tokens (that match your Traits) or a particular combination of choices.

Chapters determine how many Scenes are played, from which categories you’ll redraw, and any special rules. Players continue the back-and-forth of playing Scenes and experiencing the consequences, until the Finale.

Each character was given a hand of possible Destinies at the beginning (which may change during the game), and you pick the one you think you can achieve. Players then assess Trait goals and reveal Secrets, all of which can have final effects on Satisfaction.

If a player satisfies all the requirements, then congratulations – they’ve achieved their relationship goal. One character can fulfill their Destiny while the other doesn’t, however, just like one-sided relationships in real-life.

If neither player fulfills their Destiny, it doesn’t necessarily mean they broke-up, but it’s certainly no “Happily Ever After.” Either way, it’s not about ‘winning’ so much as the journey itself and the story you created as you went.

What’s to stop each player from merely working together to make the best choices? The game emulates the uncertainties of relationships by requiring players to keep many things secret.

Per the rules, you’re not allowed to reveal your Traits (or goals), your hand of Scenes or Destinies, or any Secrets (a special kind of card). Players can’t even discuss “what’s best” about a given decision, leaving the Scene to guessing what’s best for you or your partner.

The only thing players can do is to role-play their characters. They can talk about their overall relationship and what direction they’d like to head, whether they’re happy with how things went down, and any other “flavor” they wish to add.

Like real-life romance, you can’t always guess what the best choices are or who your partner is underneath it all, other than by looking at the clues and trends. 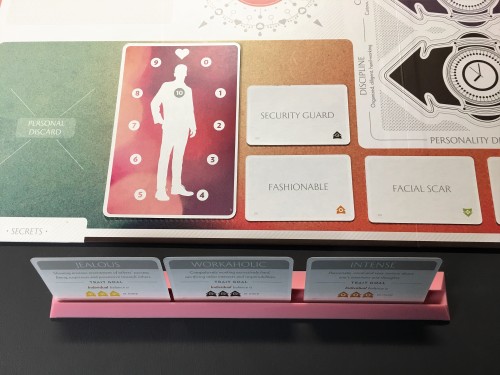 There are two concerns about this game that may affect people’s decisions to purchase or play.

First, this game is for two players only, and there are no options for solo-play or extra players. Also, Fog of Love is most appropriate for those already in a relationship, or at least close friends with whom you’re comfortable “role-playing” romantic scenarios.

This two-player, “best for significant others” design, can significantly affect getting the game to the table. If you don’t have anyone you’d be comfortable playing a love story with, then this game likely isn’t for you.

If you have the right partner to play with, however, Fog of Love can be a lot of fun. With random characters each time, you’ll find plenty of replayability with the four included Love Stories, plus three more expansions are coming out.

Second, this game is LGBTQ friendly, although there has been some critique over the depth of that inclusivity.

Fog of Love allows each side to choose either male or female outlines, and to fill in ‘flavor’ details about their character however they wish. Also, all of the cards use non-gender-specific language, like “they” or “partner,” allowing you to use them with relationships of any orientation.

There’s also the choice of pink and blue colors (falling victim to traditional masculine-feminine roles, regardless of gender) as well as the lack of consideration for other orientations or identities. As one person said, the game can play like an LGBTQ RomCom written from a straight point-of-view.

That being said, critics still praise the creator’s choice to support LGBTQ gameplay, including alternative box covers and input by game designer Nikki Valens. Fog of Love also included a few LGBTQ-specific cards and allows you to discard Scenes that may not apply to your orientation or identity.

There’s even talk of an expansion written by Nikki Valens that would focus on LGBTQ relationships. Although the game may not be a perfect representation, it’s made extra effort to be inclusive for most players.

Fog of Love may not be for everybody, with its two-player limit, romantic themes, and focus on dramatic relationships. For gamers who enjoy that sort of storytelling and seeing where things go, however, this is a great experience.

My wife and I have played this game several times, and had a blast each time, even if we’ve never quite mastered the art of a fulfilled relationship. With each new scenario, however, we always find something new that makes us want to play again and see where the game leads us.

I think this game works wonders for a fun night together with a significant other or close friend, and even if you don’t ‘win,’ you end up with a satisfying experience in the end.

I give Fog of Love a whirlwind 4 romances out of 5.