‘Tis the season to sit around telling terrifying tales that chill, thrill and leave you with nightmares.

You might think I’m talking about sitting around a campfire or a ghostly tour, but I like my Horror more immersive. That’s why I prefer tabletop role-playing games as my method of spooky storytelling.

This October of 2019, the final Halloween season of the 2010s, I’d like to look back at some of my favorite Horror RPGS of the decade. Some may be obvious while others are subjective taste, but I’d recommend any of these if you’re looking for an excellent horror-themed session (or campaign!).

I’ll preface that I’m going to be focusing on “pure” Horror-themed games, as the genre is full of fantastic games that cross lines. You won’t find urban fantasy, science-fiction, or satire games on this list.

Let’s take a step into the shadows, ignore the noises, and walk down this dark path. 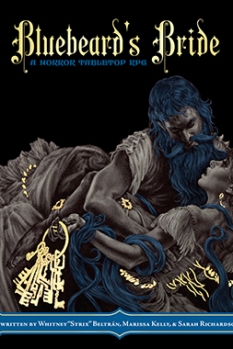 We’ve already talked about this award-nominated game based on the French folktale several times. The story of a bride, as she explores the haunting residence of her husband, and faces horrors (both real and imagined), still resonates with each play.

A PbtA game, Bluebeard’s Bride breaks from the norm by having the players all portraying different aspects of a single character’s psyche. They guide her through each room, interacting with servants, secrets, and challenges, facing whatever fate they determine.

Part horror, part mystery, and part progressive introspection, Bluebeard’s Bride brings together the best (and darkest) of media like Crimson Peak and American Horror Story. Magpie Games has put out several supplements, so its replayability has reached new heights.

Dead of Night is an excellent example of a basic Horror game, as players attempt to survive threats from any genre, whether campground slashers or J-Horror ghosts. Dice are rolled based on traits and target numbers to try and succeed at everything from finding things to avoiding physical attacks.

Characters have traits of opposing pairs (making them good at one approach but bad at others), as well as Bad Habits (that earn advantages when role-played). Survival Points drop as they face attacks or danger, but can also be used for moments of heroism and gained through various actions.

While not a perfect game, I think Dead of Night’s 2nd Edition is an excellent starting point for Horror one-shots and even the occasional campaign of “sequels.” I particularly enjoy the Tension mechanic, which causes fear-like effects but slowly reduces as the GM uses the pool, and the players become more familiar with their threats.

EPOCH, aka ‘Experimental Paradigm of Cinematic Horror,’ is essentially the FIASCO of Horror games. It presents a typical scenario of a group facing an unknown foe, with some (hopefully) surviving the final confrontation.

Using a series of cards, each session builds characters (and relationships), confronts challenges, and prepares survivors for the final round. More importantly, characters have limited chances to prevent death and depend on the support of the ‘audience’ (other players) to give them better shots at making it to the end.

Similar to FIASCO, depending on how each character did during the game, the surviving characters receive an epilogue. Altogether, EPOCH is a fun story game where relationships, and “the story” can create unexpected and fantastic outcomes.

The Final Girl is a one-shot game meant to emulate the typical slasher genre, where only one person survives in the end. GM-less and diceless, it uses a more round-table storytelling approach – you only need a deck of playing cards, some index cards, and a pencil.

Characters start by forming relationships with each other, positive or negative, which provide mechanical effects later. Gameplay consists of improv scenes, with players trying to beat the killer’s card, and ending as a person dies each scene (until only one remains).

As a GM-less game, I enjoyed how the role of the killer changes players in each scene, allowing for different approaches (and fairness). Also, the relationship mechanics provide great motivation and moments of heroism (or villainy), leading to emotion, tension, and backstabbing.

Murderous Ghosts is a tale of urban exploration, where the protagonist must either find their way out or put the spectral threats to rest. A game designed for two-players, one GM (or ‘MC’) and one player*, the game uses two books that have a “choose your adventure” style.

(*While the game is designed for a single protagonist, multiple people can portray the lone character, making decisions as a group.)

Each page leads to further questions that help flesh out the story, along with advice for the MC and their threats. Using only a deck of cards to provide a range of success (or failure), Murderous Ghosts is a strange mix of improv, guidebook, and RNG.

It all comes together, however, as the tales told are lovely and terrifying… even if the protagonist never makes it.

I won’t lie – Ten Candles is probably my favorite RPG on this list, as it comes the closest to the campfire tales of my youth.

Part game, part ritual, and 100% immersive experience, these are stories of a tragic death in a hopeless apocalypse. Characters consist of aspects on index cards while the world is built cooperatively, but it’s the mechanics and props that make this a Horror game like no other.

The players have a pool of dice to determine success, but it’s slowly diminished as they fail, while the GM extinguishes candles (plunging the players further into shadow). Players also literally burn aspects of their character, losing themselves to stay alive, until they meet their inevitable fate.

Between the props, rote sayings, and creepy atmosphere, Ten Candles is a must try even for non-gamer Horror fans. You can make up whatever scenario you like or try the multitude that are in the book or even online.

I would be remiss if I didn’t talk about great games from two specific sub-genres of Horror, starting with those based on the works of H.P. Lovecraft. Unfortunately, I don’t have time to cover every fantastic RPG in this range, but I’d like to direct people to several.

Chaosium’s 7th Edition of Call of Cthulhu was welcomed with open arms and has only improved upon one of the best, and most iconic, RPGs in history. Although it remains “classic” with its complex rules and mechanics, if you’re going to run a Lovecraftian tale, you can’t go wrong with this game.

If you’re looking for something a little simpler, then Cthulhu Dark’s Revised Edition boils the game down to its simplest. Focusing more on story and investigation, rather than complex mechanics or stats, this game allows for sessions that are easy to learn and play.

If you want a more combat-oriented game, then you can’t go wrong with the Delta Green series, where players portray government agents that face threats from beyond. You can choose between the primary (modern) series, inspired by Chaosium’s BRP system, or the Vietnam-era Fall of DELTA GREEN, based on the GUMSHOE system. 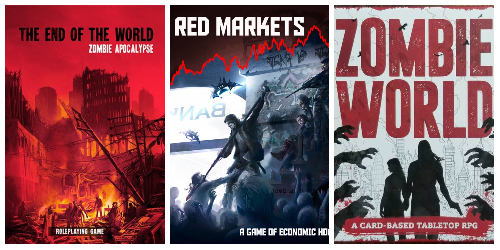 The final section I’d like to acknowledge is the broad range of zombie-based Horror games. From Night of the Living Dead to World War Z, this genre has grown in popularity almost too fast, but there are a few games I’ll always play.

The End of the World series are all great, but I particularly enjoy the first one, ‘Zombie Apocalypse.’ A simple system, several settings, and a character system designed around playing yourself, make this game stand apart from others.

Red Markets is what happens when The Walking Dead meets Fallout in a capitalism simulator. Set in both an economic and zombie apocalypse, characters eke out a living in what’s left of “normal life,” while wagering (in-game and through mechanics) anything to make it out alive and wealthy.

Zombie World is another game I already discussed in a previous article and is about as close to a Walking Dead RPG. Using cards, it creates the world and characters through cooperative world-building and randomness and focuses on the horrors of survival against the backdrop of the apocalypse.

This list is incomplete, as it’s only my favorite 13 (imagine that!) Horror RPGs from the past decade. All of these would be perfect for some epic roleplay this Halloween season (or any time!).

Don’t see one of your favorites? Feel free to add them to the comments below!