In a 2 hour runtime ‘Joker’ shows one man’s descent/ascent into chaos in a grounded Gotham City.

What happens to a man who needs help when the system fails him? The film Joker from director Todd Phillips answers this question and a few more in its 2 hour run time.

Joker is about a man named Arthur Fleck who suffers from various mental illnesses including one that makes the individual laugh out loud for no reason even when something isn’t funny. Arthur struggles through his day to day life trying to make ends meet as a party clown, with all of that going on he is trying to take care of his ailing mother Penny. Penny and Arthur live in a Gotham City that is in the middle of a sanitation strike where the city has cut funding to various programs in order to bring the workers back. During this crisis, billionaire Thomas Wayne has decided to run for Mayor in order to bring the strike to and end and clean up Gotham once and for all. Things seem pretty bad for Penny and Arthur but they try to make things better by watching their favorite late night television show ‘Live with Murray Franklin‘. Arthur daydreams of making it as a stand up comedian and someday being on the show. One day while working, Arthur is attacked by some teenagers and starts down a slippery slope that will change Gotham City forever.

Rounding out the cast are Zazie Beetz and Marc Maron. 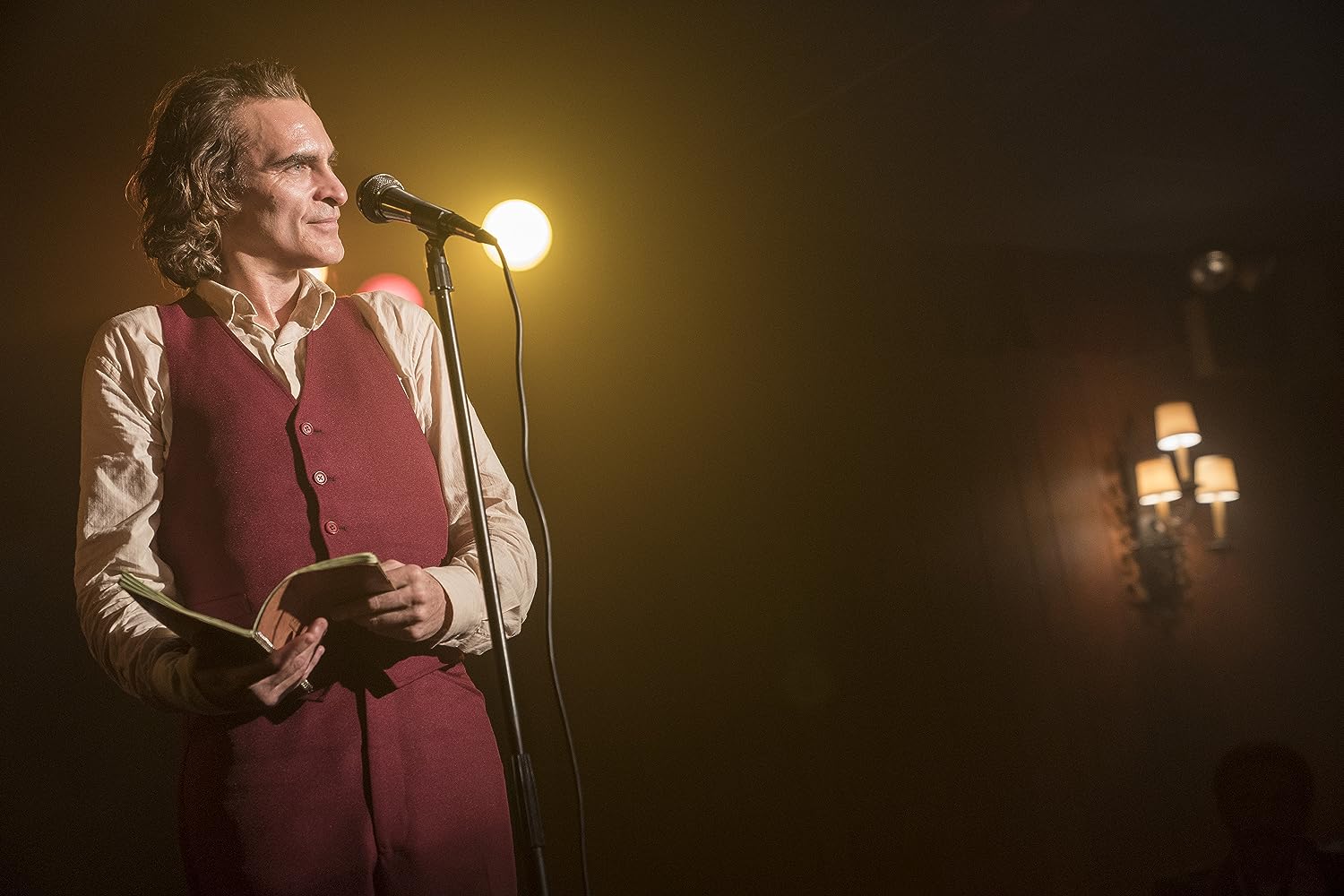 The film is written and directed by Todd Phillips and delivers a dark and gritty story about how the system can fail and the consequences of that failure. Arthur is a damaged man who is seeking answers and trying to find his place in the world. It’s in the quiet moments like the ones with his therapist that the audience sees how broken he is and how he would do anything to be free. It’s only when he truly embraces the Joker, that he is free. Phillips coaxes an Oscar worthy performance from Joaquin Phoenix that will be talked about for years. Not only is Phoenix brutal in his portrayal of the title character but he also comes across as someone to sympathize with in the beginning of the film. Throughout the movie, the audience roots for Arthur to not go down his destined path but to try and do the right thing. The end is inevitable but this is about his journey to that point.

Every scene in this movie is shot beautifully and that is a credit to veteran cinematographer Lawrence Sher. Every single scene and moment is captured in a way that is captivating and haunting. My favorite scene in this movie features Arthur and his mother in an intimate moment where they start to dance. Penny is so overwhelmed by everything going on in Gotham and Arthur steps in to try and give her a moment of peace. It’s this moment and other smaller moments that really drive home the impact of Arthur’s decisions. Sher knows how to film these small moments as well as the big moments and it shines in a dark film. 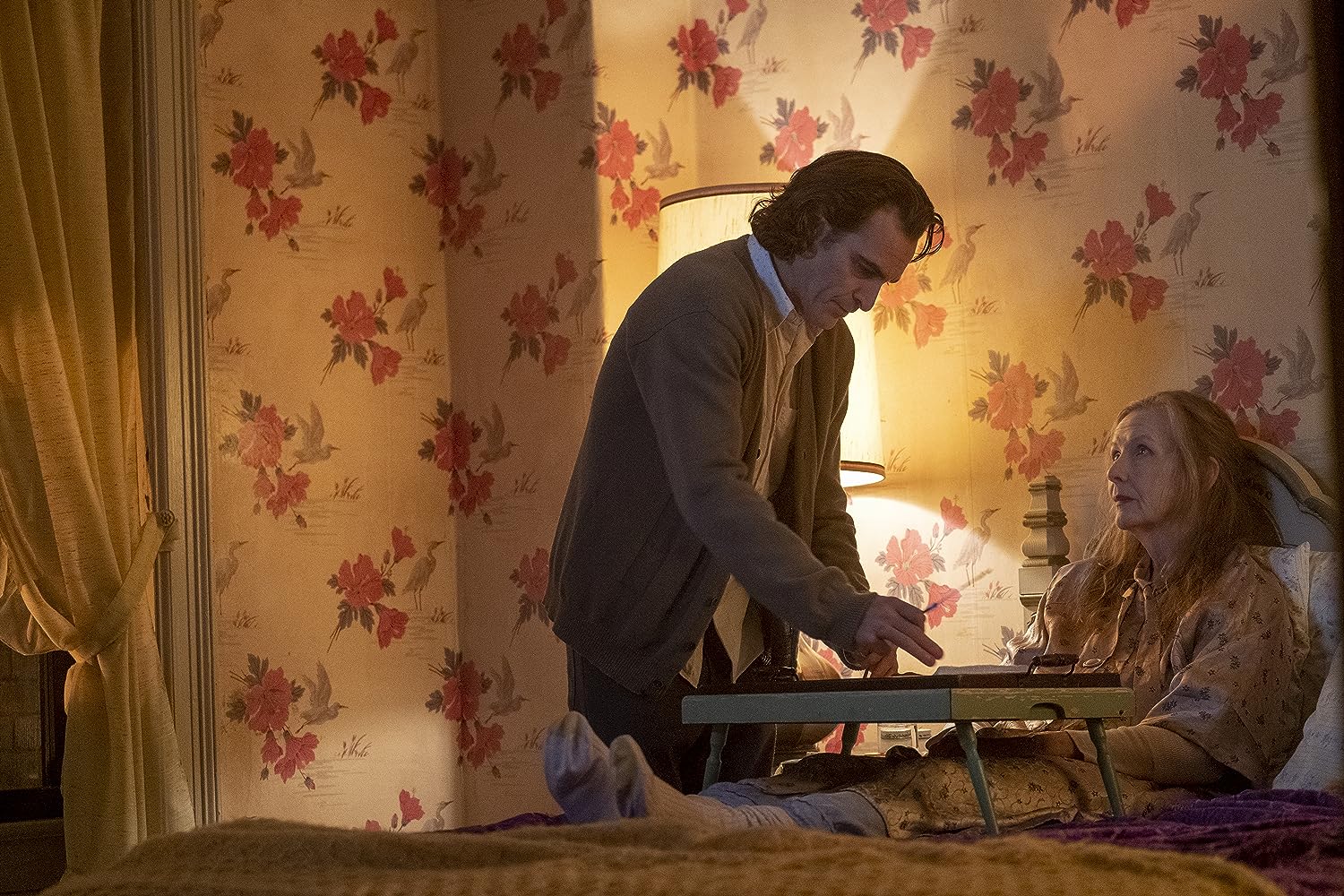 While this movie is beautiful and deserves the praise it has gotten, there are some concerns especially from hesitant moviegoers about the violence in this film. We live in a time where both mass violence and mental health are major issues and Phillips and company address this throughout. Arthur is the product of a system that failed him. He is someone that has sought out help only to be shown that he doesn’t matter. His life is, and his mental health are, meaningless to the city government. It’s only when Arthur embraces his violent side that he truly starts to see who he is meant to be and finally steps into the light. In no way does this film condone mass violence or panic in any way. It shows that given the circumstances and with everything going on in the world, that we are sitting on a powder keg that can go up at any moment and it’s up to us to change that. Arthur rarely does any killing, he incites people to do it for him and the people follow. It goes to show how in touch Phillips and the cast are with everything going on in our modern world.

The biggest message I took away from Joker is that we need to do more for mental health advocacy. We need better programs and care for the patients who seek it out. Otherwise we end up with a situation like Gotham is in. The other message I took from this film, is that one person’s descent into madness may be seen as an ascent into clarity. The only people to understand Arthur are the ones just like him. Some of the city even rallies around Arthur and his actions which culminate in an intense finale that drives home the messages further.

When it comes to flaws with this film, the only thing I found was that it isn’t suitable for everyone. This is a movie that is meant to make people uncomfortable and it succeeds in doing so. This story is a crime drama disguised as a comic book film and it works in every way.

5 Clown Prince’s of Crime out of 5