The Fall 2019 TV season is off to a running start. Both CBS and NBC have offered hour-long legal dramas. One set in the courthouse, the other in a law firm.  From the first episodes, both shows will have a central case to anchor the episode with smaller cases and the personal lives of the characters filling out the rest of the episode. 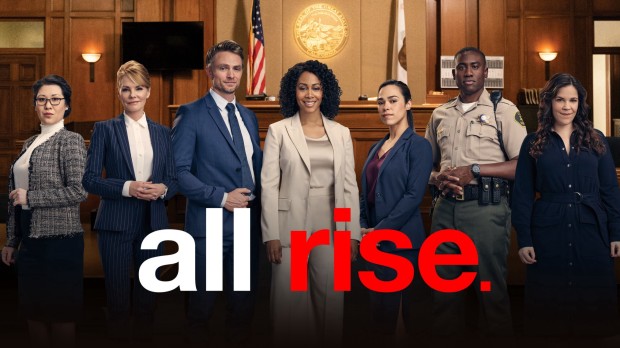 All Rise stars Simone Missick as Lola Carmichael, a newly appointed judge in Los Angeles, CA. In the first case, Judge Carmichael intervenes during the plea bargain hearing due to believing the defendant was railroaded into pleading guilty.  This allows the audience to see exactly who she is as she forces the case to trial uncovering faults in the police department and judicial systems of her district.

The cast has was clearly borrowed from the Netflix Marvel Universe, as, besides Missick who played Misty Knight;  Wilson Bethel, Bullseye from Daredevil, is cast as ADA Mark Callan. This strong cast also includes Marg Helgenberger as a managing judge and Richard Brooks as a corrupt police chief.

Bluff City Law is set in a Memphis law firm that specializes in civil rights and class action suits. This show is a starring vehicle for the magnificent Jimmy Smits as Elijah Strait and Caitlin McGee as his daughter Sydney. Sydney and Elijah’s personalities balance each other even though they have a strained relationship due to events that happen before we meet them. After the death of Sydney’s mother, she comes back to work with her father on a class action suit against a chemical company. Rounding out this ensemble cast is Jayne Atkinson, Stony Blyden, Michael Luwoye, & Barry Sloane.

My first impression of both shows is positive; the writing and casting were solid in these early episodes. I love that the cast of both shows is race and gender-inclusive. If they both stay on the courses they started, I could see both shows on the air for several seasons.