Disney’s “Aladdin” is a wonderful retelling of the original animated film that will take you back to simpler times.

The highly-anticipated Disney’s Aladdin is finally here. The live-action remake of the 1992 animated classic of the same name is the story of the titular young man growing up on the streets of the fictional town of Agribah. In order to survive, Aladdin (played by Mena Massoud) has to steal food in order to keep himself and his faithful monkey sidekick Abu fed.

One day, while going through the marketplace, Aladdin saved Princess Jasmine (Naomi Scott) (who has disguised herself in order to escape the palace) from being punished for giving away bread to starving orphans. After the two escape with their lives, Aladdin follows Jasmine back to the palace, where he is captured by the sultan’s vizier, Jafar (Marwan Kenzari). Jafar offers to make Aladdin rich if the young man goes into the mystical Cave of Wonders in order and retrieves a magic lamp. Once inside, however, Aladdin is betrayed by Jafar, and becomes trapped in the cave. That is, of course, until the curious Aladdin rubs the magic lamp, and his life is forever changed by a magical genie (Will Smith).

Rounding out the cast are Navid Negahban, Nasim Pedrad, and Billy Magnussen. 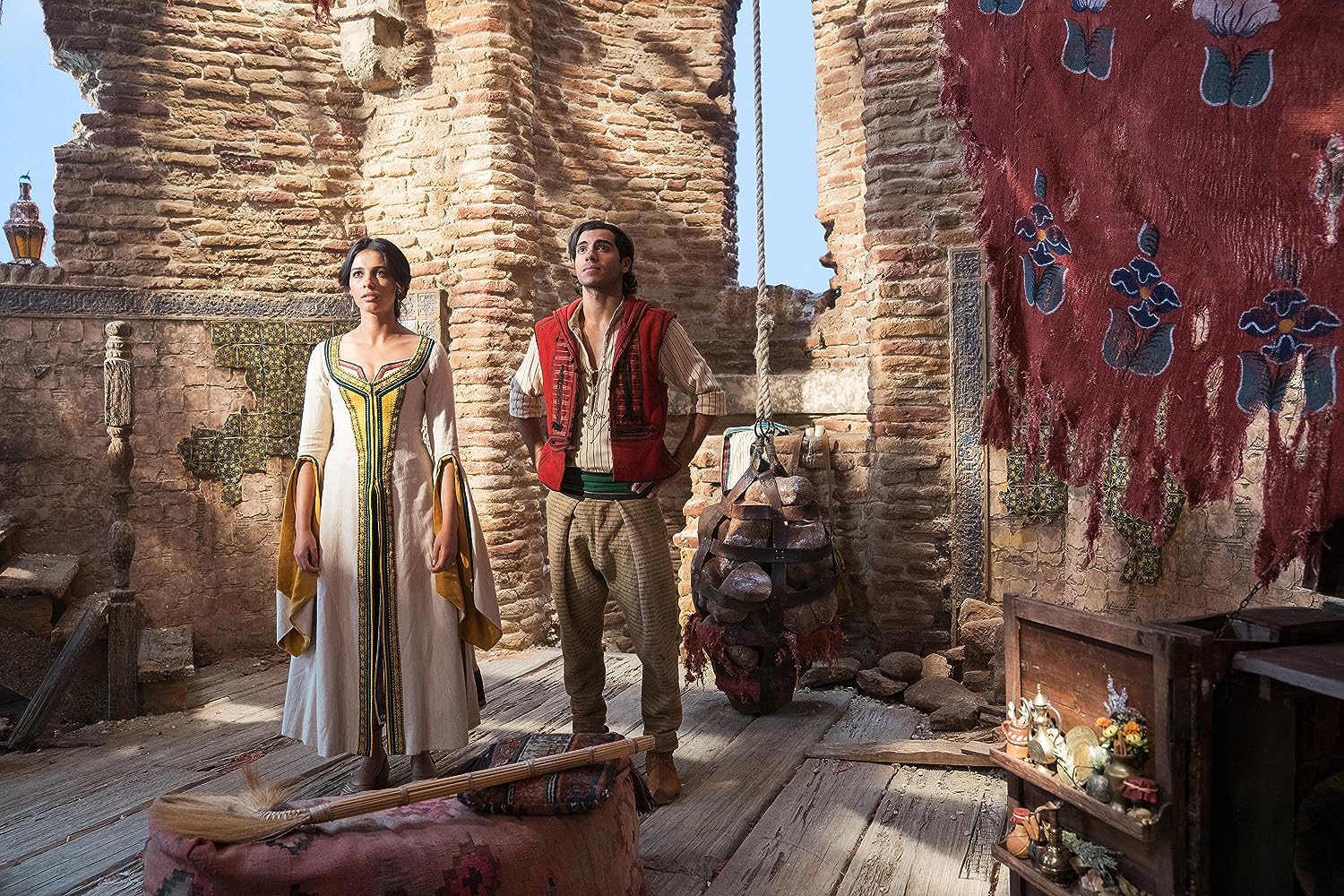 Disney’s Alladin is directed and co-written by Guy Ritchie (John August shares writing credits), and has a masterful score composed by the prolific Alan Menken (who also composed the music & lyrics for the original animated version). Now, I will be the first to admit that I was wary of this film being directed by Ritchie, given his uneven track record. From the moment the movie started, however, all of those worries faded away. Ritchie seemed to embrace the wonder and mystery of Agribah, and in turn allowed the audience to do the same. He also brought out the best performances from Smith, Scott, Massoud, and Pedrad, who captured the audience’s imagination and truly got into their characters. In my opinion, the four of them alone are worth the price of admission to this movie, and they deliver on both the fun and the emotion of this story. The chemistry between Massoud and Scott is beautiful, and really feels fleshed out. Watching the two characters fall for one another is a joy, and seeing them play off one another in the more comedic bits really helps the audience root for them even more.

Now, let’s address the elephant in the room — or should I say, “the Genie in the room”? If you, like many others, were initially critical of Will Smith’s look as and portrayal of the iconic Genie, have no fear. Smith truly embraces the character and makes it his own, while still paying small (and heartwarming) homages to the late, great Robin Williams (who voiced the character in the original 1992 film). Smith looks like he is having an absolute blast onscreen, and it shows through in his comedic performance. He has amazing chemistry with Massoud, and the two play off one another very well. The dialogue between the two actors comes off so naturally, that it really feels like they’re just having a conversation between friends. In addition, Smith’s renditions of Arabian Nights, Friend Like Me, and Prince Ali are fresh and upbeat, while still honoring the original songs. Finally, the Genie also gets a really interesting subplot, which feels very natural and serves the overall story in a bigger way. So, don’t worry about Will Smith and Genie. We ain’t never had a friend like him.

Now, I mentioned earlier that Alan Menken came back to do the music for this live action version of Aladdin, and boy does he deliver…for the most part. Menken’s original songs are all still there, still amazing to listen to, and will take a lot of people back to their childhood. I found myself welling up with tears at times during a lot of the tunes, as the waves of nostalgia really hit me hard. It felt like all of my concerns in life just disappeared, and I could be a kid again.

However, not all of the music is as perfect as all that. We live in an amazing age of female empowerment, and this version of the film really shows off an even more empowered version of Princess Jasmine. With that being said, though, I did have a bit of an issue with the new song Speechless. While the song is about the princess refusing to stay silent and changing the norm, I found myself feeling repeatedly hit over the head by its message. After the screening, I even talked to a few of the other audience members, and they confirmed that Speechless felt shoehorned in and that it was a bit much. Other than that one issue, though, I loved the film.

As I watched Disney’s Aladdin, I found myself enjoying it quite a bit. However, there was one more thing that rubbed me the wrong way, and that was the portrayal of Jafar. I’m not sure if it was just me, but it almost looked as if Marwan Kenzari was actually bored in all his scenes, and that showed through in his delivery. It was just…monotone. Jafar is such an iconic villain in the Disney-verse, and really has a rich legacy. Here, however, the character just doesn’t feel like he moves the story forward. Additionally, Jafar is supposed to be an older, creepy-looking man, but Kenzari’s polished & chiseled look onscreen flies in the face of that, which felt like it hinders the character. It also felt like Jafar was trying to be “too political”, which just took away from the experience. Perhaps a sequel based on Aladdin and the Return of Jafar would allow for more fleshing-out of the character, but he just wasn’t my favorite here.

Despite the negatives, Guy Ritchie and company deliver a wonderful and magical theater-going experience that will take older audience members back while also introducing a new generation to these amazing characters. The music is fantastic and the jokes land, but most importantly, the adventure delivers.