After nearly 15 years (22 if you count the original limited run), 25-ish variants, and a dozen expansions, you’re either a fan of Fluxx, or you’re not. Looney Labs‘ first, and most popular, game is fast, easy to learn, and perfect for playing anywhere.

So, what is there to say when a new version comes out? I suppose the same thing when Ben & Jerry’s releases their latest flavor: yay, more ice cream!

Star Trek: Deep Space 9 Fluxx is the newest variation of the game coming to shelves and, like many before, if you enjoy that particular dessert this will be perfect for you.

I love Star Trek and will even stand by my unpopular opinion that Deep Space 9 is the best. The characters, the cast, the story (Dominion War!), and so on made DS9 stand apart from Star Trek (TOS) or Star Trek: The Next Generation.

DS9 Fluxx reminds me of how much I love about the series and puts it into the fun, fast, and (sometimes) frustrating play of Fluxx.

All your favorite characters, vehicles, and equipment are Keepers whereas the Dominion “invade” your hand as Creepers. Similarly, many Goals directly reference character plots (like Nog or Jake’s career decisions) or regular show events (like Bashir and Garak’s lunch meetings).

I was a little disappointed that a lot of the cares were only generic Fluxx cards (albeit with a DS9 font), such as the Rules and Actions. Even though, you do come across something referencing things like Acquisition and Dabo. 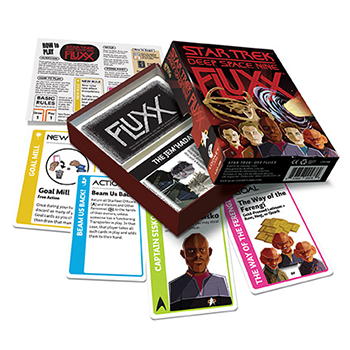 DS9 Fluxx retains all the most recent card types except for the Ungoals found in several 2018 variants as well as Cthulhu Fluxx. Meta Rules, Creepers, and Surprises lurk in the deck, ready to mess with the game and set everyone back.

In addition to the Crew and Equipment signifiers found in TOS and TNG Fluxx, you’ll also find Visitors and Other Personnel. Given that DS9 was a crossroads and waystation, it makes sense to distinguish between these different types.

One aspect I found enjoyable is the unique art of Kevin Hill, who also illustrated TOS and TNG Fluxx. It has a feeling of Post-Impressionism, similar to Toulouse-Lautrec and his posters from the late-19th century. 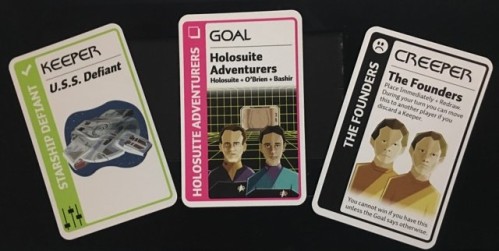 Is DS9 Fluxx worth adding to your (probably expansive) collection? Absolutely.

I enjoy Fluxx as a core game, so any themed versions are like different flavors of my favorite ice cream. DS9 strikes a more massive chord with me over TNG and TOS simply because I particularly love that series.

Dust off your Dabo table, remember your rules of acquisition and get ready for a wild journey through the wormhole in a way that only Looney Labs can take you.

I give DS9 Fluxx a profitable 4 bars of gold-pressed latinum out of 5.

(Thank you to Looney Labs Games for allowing us to preview their game!)