As someone who’s recently gotten into the “Soulsborne” series of games by FromSoftware, when Sekiro: Shadows Die Twice was announced, I was excited. After four games that played with medieval fantasy (and one gothic horror title), FromSoftware goes for a different style of game in Sekiro. While it’s on quite a different plane from its predecessors, it isn’t any less difficult. Graphics
As with other FromSoftware games, Sekiro: Shadows Die Twice is just gorgeous. The game is set in Japan’s Sengoku period, so it has very little in common tonally with Bloodborne‘s Yharnam or Lordran in Dark Souls. However, given that the era in which this game is set is a period of continuous bloodshed and death, Sekiro has its own disorienting vibe. Reminders of the battlefields are strewn everywhere you go. Whether that’s dead or dying soldiers, destroyed architecture, or unsettling weather, it all helps to set the tone. Playing on a PC with maxed out settings (3840×2160 with G-Sync), I can’t speak to what Xbox One and PS4 players have going on, but FromSoftware really knows how to create a hauntingly beautiful world. Aside from some strange ragdoll physics with dead enemies dropping again, the immersion is complete. Along the same lines as Legend of Zelda: Breath of the Wild, being able to observe the raw beauty of the world around you despite the devastation is worth it. 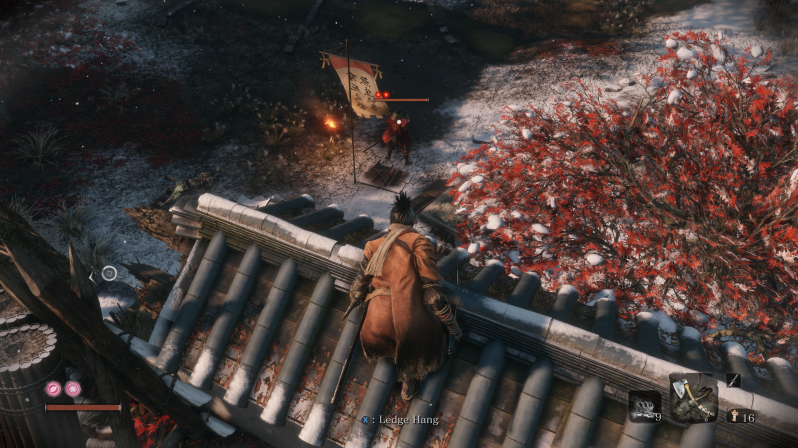 Story/World-Building
Compared to the way that Dark Souls and Bloodborne layer their respective goals beneath lore and observation for you to figure out (“Seek Paleblood to transcend the hunt”), Sekiro has a more defined story. You play as the Wolf: a shinobi under the charge of a young lord. After his charge is kidnapped, and his arm lopped off by a powerful samurai, the Wolf gains a mysterious prosthetic arm with extraordinary abilities. Setting out after the samurai who stole his young lord, he then discovers that he has the ability to resurrect from the dead.

Unlike the Soulsborne games, Sekiro is more prone to using cutscenes. Still, it leaves quite a bit of its world-building up to you. While the game isn’t open-world, the story and where you explore isn’t simply defined by Point A to B; you’re given quite a bit to do within the boundaries. This, of course, means that you should explore every nook and cranny of this full world. That extra exploration could lead you to treasure, side quests, shops, various bosses, new shrines, and more. As for my experience, part of the fun of this game has been exploring the limits of what the Wolf’s abilities have to offer in order to hone skills – and see what else there is to crack. Controls
The gameplay for Sekiro is very much its own animal. Sure, the game does have some hybridized tendencies that have become synonymous with the Soulsborne games (e.g. consumable items, a parry mechanic, and fast travel checkpoints that heal you). Still, this is not one of those standard games. Sekiro: Shadows Die Twice is not an RPG with a character who acts as your face — you’re a singular person with a defined mission. The game also opens the world to you early on for exploration. Locked gates are not a factor for you, and with good reason: Wolf’s prosthetic allows for the scaling of heights that would be difficult to simply climb on your own. Add to that the fact that the game urges you to explore, and you’ve got the basis for one of this title’s mechanics. This change from the Soulsbourne games also applies to how this game rewards the handling of enemies. If you’re not prepared, it’s difficult to handle even one enemy — let alone a crowd of them. To that end, you’re given a great deal of tools to help. The variety of prosthetic arms which act as a sub-weapon, the ability to manage the items you have, and new shinobi attacks or abilities will expand your capabilities and allow you to more easily take on enemies.

Of course, there are a variety of people and creatures armed in clever ways all out to kill you. Patience is a virtue in this game. So, you’re given a stealth mechanic to sneak around, and you must use every tool at your disposal to stay out of sight. Your grappling hook, your ability to hide among the scenery, and whatever items you have will all come in handy. Sometimes, it can also be useful to try different strategies. Using a stealth hit-and-run, separating enemies out so you can take them on one by one, or (true to FromSoftware form) simply cheesing an enemy till you can take them out.

The game’s combat system is also ingenious in this regard. As opposed to a simple health bar, the game uses something called Posture to manage battles. While most weak enemies are easy to kill one-on-one (whether by stealth or face-to-face), if they defend themselves, you must break their posture. This means breaking their defense before you can go in for the kill. However, you’re also governed by poise as well. If you defend too much, you can also be broken down. The game encourages you to experiment, but it also actively tries to trick players of previous FromSoftware games. As opposed to managing hordes of enemies, you’ll need to learn how to deflect single attacks, dodge them, or run. Not all enemies can be defeated the same way, and it never pays to be married to one strategy. In this regard, Sekiro is extremely fascinating in terms of how much depth this battle system affords it. Remember: you’re not meant to slog through groups of baddies. Sometimes a tactical retreat and re-assessment of the situation is the right thing to do. Sekiro: Shadows Die Twice is a fascinating (if occasionally frustrating) experience. While I do love the game, it punishes you hard when you can’t keep up. This, of course, is just a long-winded way of saying that it’s a FromSoftware game. Still, the key thing is that eking out a victory is extremely satisfying. While the lows can be teeth-grinding, the highs are exhilarating. You won’t find a better game to play this year, that’s for sure.