Ah, St. Patrick’s Day: a day of Irish folk music, whiskey, green beer, corned beef, cabbage, and partying with friends and family. Of course, no party is complete without playing some tabletop games! So put on your leprechaun hats and follow along as we dive into our top games to play this coming holiday. From the wild drinking games to the serious war games, there’s something for everyone on this list.

The group picks a “Blarney Master” (who is also an active player), and that person picks and reads a word off of a randomly chosen card. The rest of the group has three minutes to write down their definition of the spoken word, and then points are awarded based off who has the best definition, as chosen by a group. If no one gets the definition correct, the Blarney Master gets points. Whomever gets the most points in a round gains a green Blarney Stone, and the first person to ten stones wins the game. This is a fun party game to play with a group of people, especially after imbibing lots of green beer throughout the day!
For 3 or more players, ages 12 and up.

Vikings have destroyed the city, and it is up to the druids to recover pieces of the sacred amulets lost in the attack. The players take on the role of the druids and scour the board, drawing cards and moving towards sites that contain pieces of amulets. But beware: Vikings still lurk in the shadows and will take the pieces from you if you’re not careful! The winner is whichever players manages to create the most complete amulets from their accumulated pieces. With a playing time of 45 minutes to an hour, this game is a great fit for a small family gathering.
For 2 to 5 players, ages 10 and up.

This game is crazy and gets even crazier as it continues! There are two decks of cards in the game, Duel cards and Do Something cards. The Duel cards are akin to a lot of party games, in that you choose an opponent, and you both compete to fulfill the task depicted. The rest of the group then votes on the winner. The meat of the game, (and the source of the wackiness and laughter), however, lies in the Do Something cards. These are individual secret goals that you must complete during gameplay, both in a manner that can be confirmed by other players, but not in such a way that they’ll catch you before you complete them. Spice it up with some drinking rules and you’ve got yourself hours of debauched fun!
For 4 to 12 players, ages 12 and up.

This is a light war game that is simple to learn and quick to play, with even a full complement of four players usually able to wrap up a game in twenty minutes. The players each take on the role of one of four ancient kingdoms of Ireland (Munster, Leinster, Connacht, and Ulster), seeking to be crowned High King of Hibernia. Your warriors are colored cubes, which you move around the different-colored counties of Ireland, expanding and engaging your opponents in combat. Scoring is what makes this game unique: each space on the victory point track has a number of different colored counties on it. In order to advance down the track, you must control all the colors labeled on the space. This makes Hibernia a fast-paced area control game where your objective changes every round and you can see exactly what your opponents need to do in order to advance…and get in their way.
For 3 to 4 players, ages 8 and up.

An abstract strategy game based off ancient legends of Ireland’s Celtic history. This game takes a few minutes to learn, but a lifetime to master. Players create “ring forts” made out of beautifully designed Celtic knotwork, with the objective of having the fewest kingdoms at the end of the game (kingdoms being groups of linked ring forts). In phase one of the game, you create a network of unlinked kingdoms, and in the second, you are linking them to your own with bridge tiles. Had enough of the base game? That’s great, because there are eight different scenarios in the game that you can play, lending it tons of replay value and ensuring that there’s always a new strategy to try out. If you’re looking for a “pure” strategy game with one other person, we can’t recommend Tara enough.
For 2 players, ages 8 and up. 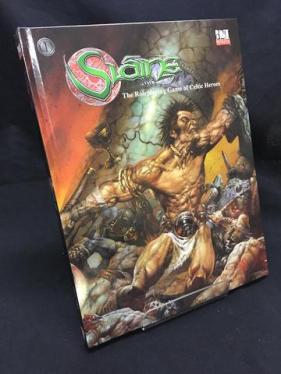 Finally, for those of you who are more in the mood for a tabletop role-playing session this St. Patrick’s Day, there’s always this Celtic-themed gem published in 2002 and using the D20 system. The setting is based heavily on Celtic mythology, and players’ characters are drawn from the four tribes of Tír na nÓg – the Land of the Young. To the south lie the Drune Lords, who preach that death should be brought to all living things as it is the only way to end life’s suffering. To the west dwell the berserkers of Midgard, who raid and pillage to their hearts’ desires. The to the north roam the Fomorian sea-devils, strange and evil chimeras that feed upon the suffering of mortals. Players will be called upon to wage war, look for ancient treasures lost to time, build up their honor and reputation, and perhaps even become tribal leaders themselves.

There you have it, readers: an exciting (yet by no means comprehensive) list of fun games to play with family and friends this St. Patrick’s Day! Let us know what games you and yours will be playing this holiday, and remember: have fun, and drink responsibly!