Genius Games has a history of crossing the line between gaming and education. From Peptide to Cytosis, John Coveyou masks fantastic gameplay underneath a veneer of science and jargon.

It’s fitting that we reviewed Cytosis approximately one year ago, because we now have the latest addition to their library – Subatomic: An Atom Building Game.

A deck-building game, Subatomic shows how quarks and photons combine together into larger forms and eventually build up into elements. Players use subatomic particles to build their element, purchase new cards for their deck, and create the energy necessary to finish the process.

The primary goal is to create elements that provide points based on atomic mass, while secondary goals award points for quantity or variety of elements. Whoever has the most points is given an honorary Ph.D. in particle physics! (OK, we made that last part up…)

Subatomic turns flow very quickly, with each player taking four different actions until the player runs out of resources or chooses to stop.

Each turn a person can Build Up Their Atom, Claim an Element Card, Buy Deck Building Cards, or Take Energy Tokens. These actions can occur in any order, as many times as the player likes, until they declare its time to Refresh the board.

Once a person is done taking their actions, all Cards in Play (used cards) are discarded, and the player redraws up to their maximum hand size. The central board is then refilled with new Elements or Particles and play continues to the next person.

All players are given a Player Mat which contains the rules, a spot for Particle Markers, and an Atom on which you track what particles you currently have. Building the atom is done by using cards in your hand, increasing your Protons, Neutrons, and Electrons.

Adding particles requires initially using combinations of Quarks and Photons, which can exhaust your hand fast. As the game progresses, your deck will have more massive particles, and even Scientists, that will help you finish your atom more quickly.

Once you have reached your goal, and you have the Energy necessary, you can acquire an element that your atom matches (or exceeds). As a bonus, you also can place markers on secondary goals that may provide bonus tiles or help toward final scoring. 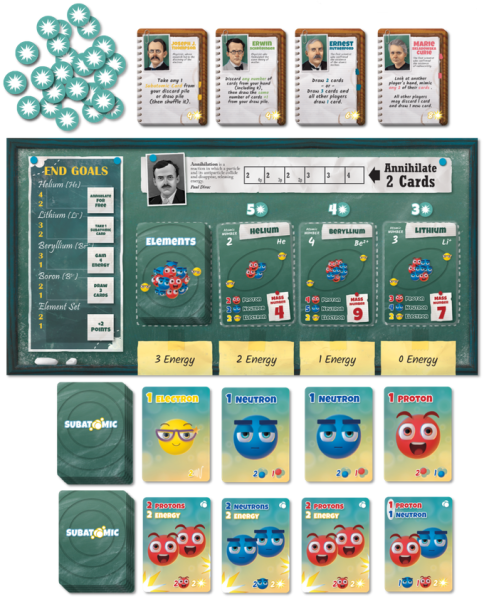 Subatomic is a deck-building game, and your actions include buying the cards necessary to stack your deck in your favor.

Another card that helps your deck are Scientist cards, which offer special abilities like drawing more cards or mimicking others. Each game has four random scientists available (three cards per scientist), with the card’s energy cost increasing as more people purchase them.

To gain the energy necessary to add these cards to your deck, players just choose to play cards face-down, acquiring Energy Tokens on a 1:1 exchange. Each person can then use the energy to buy cards, claim elements, or even draw more cards (if needed).

Once we were used to the game, all the above flowed as fast as any deck-building game. Often, players were done with their turn and still redrawing (and reshuffling, if needed) while the next player was taking their turn.

After reading the rules, I thought Subatomic might be a little too simple and straightforward, compared to the worker-placement of Cytosis. I couldn’t be more wrong. The number of choices you have, and the routes to strategy, are numerous.

For example, you can concentrate on building up your deck, but you might fall behind on creating elements and the benefits. Each time someone finishes their atom, they place markers on the secondary goals and take one bonus tile; if you wait until too late, not only will your markers be outnumbered (netting you less points, or even none at all) but also there will be no tiles left.

Also, energy comes and goes so fast, you must figure out what is the best way to spend it. If you save, you can afford costly particles or scientists, but then you’ve skipped cheaper cards or claiming elements; conversely, going for cheap cards may hamper you when your opponents are building atoms faster thanks to their stacked decks.

What we loved about this game was how much strategy it had (compared to other deck-builders) while providing games that were relatively quick (under an hour). Even with our constant second-guessing and occasional analysis paralysis, Subatomic ran fast and smooth.

We will say that the ideal number is two or three players, as four players slow the game down a little. Thankfully, the complexity is low enough that even four-player games still ran quickly and were done in little over an hour.

One concern is that the came does become a little repetitive after a while; as they only provide four elements, (the simplest except for Hydrogen), the goals each game become old hat (even with random bonus tiles). Adding new elements might require a new board, however, as the amount (and complexities) of particles increases the further into the periodic table they’d need to explore.

Although we think Cytosis is the superior game, Subatomic is not one to pass over. If you’ve enjoyed any of Genius Games products before, this latest addition deserves a spot on your shelf.

Subatomic does surpass its predecessor in several areas: ease of learning, speed, and less intimidating scientific jargon. We might even recommend this one for late-elementary school children, who would appreciate the quicker gameplay and more approachable material (and art).

We give Subatomic an excited 4 atoms out of 5.