Now, this is a game we weren’t initially planning to cover for Ghosts of Games Past, but talking about Shining Force made it difficult not to want to re-examine the Fire Emblem series. And if we are going to talk Fire Emblem, we would be remiss to not zero in on what is probably the best game in the series: Fire Emblem: Seisen No Keifu — translated colloquially as Genealogy of the Holy War (GotHW). While it wasn’t the first game in the series to come out for the Super Famicom, it was the first in the Jugdral duology of games. The gameplay itself unfortunately has never received an official translation, but GotHW is probably the most influential game in the series; and not without reason.

Fire Emblem: GotHW initially follows the adventures of Sigurd, a young lord of Chalphy, a province of the nation Granvalle in his quest to stop an invasion of his country by the enemy nation Verdane. After a time skip, the game then focuses on Sigurd’s son Seliph, who leads a rebellion against the now-ascendant Granvalle Empire.

This particular entry is special for a variety of reasons, however. The first being that, unlike the other games in the series, you can lead your entire army into battle. That of course comes with the caveat that you receive less units to use in this game than in the rest of the series, but it does create an interesting set of gameplay circumstances. The limited amount of troops means a greater deal of individual attention can be given to making sure the right units are given proper attention as opposed to having to drop units when a better one comes along. 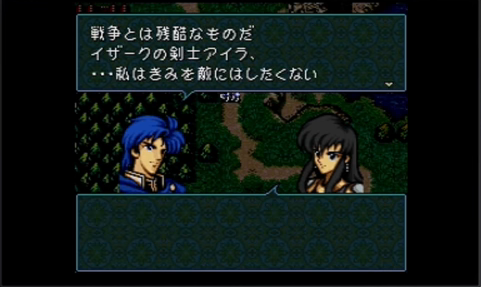 The game also has far larger maps than the series ever had up to that point, and encompasses a wide variety of environments. This, of course, is also what enables it to do something that only GotHW has done: the main objective of each chapter is to seize the enemy castle. While there are sub-objectives buried within that, the goal is always to seize the castle. It’s understandable that this might seem repetitive at first blush, but it helps augment the feeling that you’re leading nations into battle, as well as promote experimentation of how to approach each battle. As a home base, the castle also serves as a prototype for the “Base” concept in later games. You can purchase items, take part in arena fights, and heal characters as needed while at your main castle.

There’s also one particular gameplay element in GotHW that’s never shown up again in later games: the Bloodline system. In the backstory of the game: most of the major nations of the continent have leaders that are descended from twelve warriors with divine blood. Major characters on both sides of the game’s conflicts are descended from these warriors, and this is incorporated into a character’s stats as well. Bloodline comes in two forms: major or minor blood, and introduces boosts for several things: 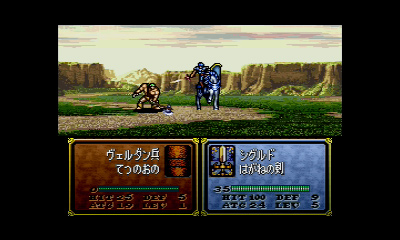 The most influential thing that this game brings to the table, however, is the Love system. The game allows you to pair off male and female units (with the exception of a few locked units). While this has the benefit of providing combat bonuses and items, it also enables you to make choices that impact the second generation. This includes items, stat and skill bonuses from the parent’s bloodlines, and access to the holy weapons. The interplay with the blood system allows you to have a greater role in shaping what kind of units you’ll have access to in the next generation. This system has shown up again, albeit in different fashion, in more recent games. GotHW was still the granddaddy of them all.

It also doesn’t hurt that GotHW has fantastic graphics and a memorable soundtrack to boot. It’s hard not to remember fondly all the times I played this game as a teenager over an afternoon or long evening and just listening to the tracks. The combat also has some great critical hit animations and some of the most memorable magic attacks in any of the games. While Super Famicom/SNES games tended to look and sound great, there’s not many that for me just stood out like this one did in presentation.

The story itself is also one of my favorites in the history of the series. While Fire Emblem usually tends to have a pretty good storyline, GotHW ups the ante compared to its predecessors. It deconstructs both JRPGs and Fire Emblem itself in a way that was ahead of its time. The notion of the youthful hero who takes on the evil empire with positive ends and consequences is torn to shreds and reconstructed over the course of the game’s two generation story. Without giving away too much of the story, it cuts into the nature of the plot ideas and twists we take for granted in the JRPGs; both past and present. It’s hard not to see the game’s story as underrated in that regard.

It’s quite surreal that this particular entry has never made it over to the west. While it’s not the first time or even the last time a Fire Emblem game never made it over (the first few games and New Mystery of the Emblem come to mind), this may very well be the game most influential on recent games in the series. While it’s somewhat understandable that Nintendo might not be invested in translating a decades-old game that they’d be selling at a slim price, the lack of a remake is quite astounding too. The game’s storyline (which was pretty dark, even for one released during the 90’s) is unlikely to be a problem in the West now. Nintendo has gladly ridden the wave of popularity Fire Emblem has gained since the mobile game, so it’s entirely possible that we may get a remake. But until that time comes, the Super Famicom game is absolutely worth seeking out.

Are you a fan of the Fire Emblem series? Let us know what you thought of it by leaving us a comment down below, or by hitting us up on Facebook or Twitter!