Over the last thirty-plus years, readers have been entertained and captivated by the works of Tom Clancy. Clancy created one of the biggest literary connected universes ever with his characters of John Clark, Ding Chavez and most importantly Jack Ryan.

Over the last thirty-plus years, readers have been entertained and captivated by the works of Tom Clancy. Clancy created one of the biggest literary connected universes ever with his characters of John Clark, Ding Chavez, and most importantly, Jack Ryan. Ryan has been the main character in most of Clancy’s books, as well as the leading protagonist in their multiple film adaptations. The character has been played on the big screen by Alec Baldwin (The Hunt For Red October), Harrison Ford (Patriot Games, Clear and Present Danger), Ben Affleck (The Sum of All Fears) and Chris Pine (Jack Ryan: Shadow Recruit). Now, the character has made his television debut, being portrayed by John Krasinski (The Office, A Quiet Place, 13 Hours) in Tom Clancy’s Jack Ryan from Amazon Prime Video.

The first season of Tom Clancy’s Jack Ryan focuses on Jack as he works as an analyst for the CIA. He is working on tracking financial transactions that could be used for potential terrorist attacks, when he comes across a nine million dollar exchange acquired by a man named Suleiman (Ali Suliman). Ryan teams up with his boss, James Greer (Wendell Pierce), to find Suleiman and put a stop to whatever his planning.

While all of that is going on Jack meets and begins a relationship with Dr. Cathy Mueller (Abbie Cornish), aka the future Mrs. Dr. Ryan. Jack then starts to navigate the political landscape, as well as set up his future with the Agency. I’m not going to spoil too much by delving into the other subplots here, but sufficed to say, they’re definitely enjoyable.

Rounding out the cast are John Hoogenakker as Matice (or possibly John Clark?), Dina Shihabi as Hanin, and Haaz Sleiman as Ali. 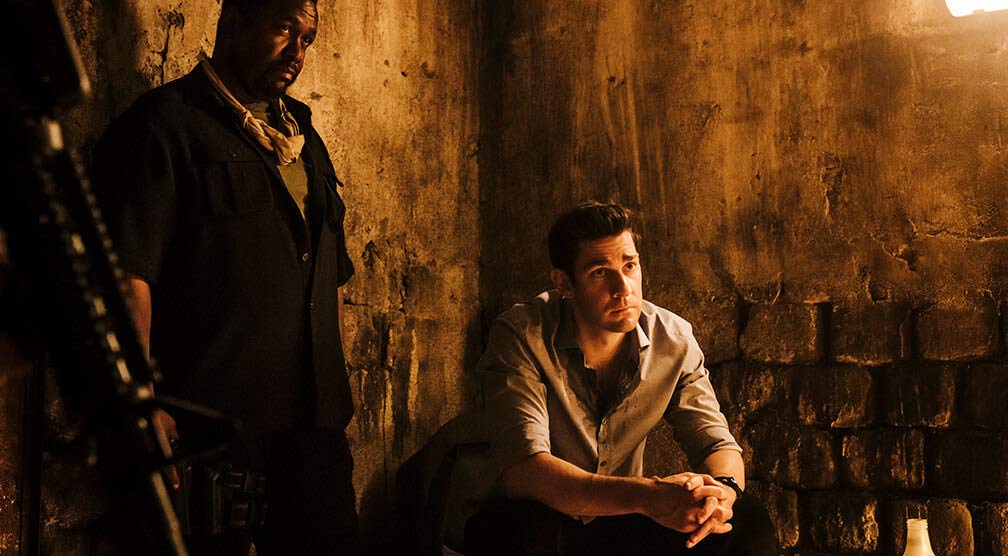 This show was created by Carlton Cuse (of Lost fame) and Graham Roland, and they deliver something that not only has tons of action, but also a lot of heart. As I was going through this season, I couldn’t help but admire not only the story and performances but also the production value. The various sets look great and the action set pieces that are sprinkled through this season are just breathtaking. There is even an action sequence towards the end of the first episode that looks like it was taken from a summer blockbuster. I couldn’t look away from the intensity of the firefight, and when it was over I wanted more. These action scenes also show that Krasinski can hold his own in a fight, and use the environment around him to seize the advantage and win. Krasinski has really established himself as a man who can carry a franchise (hopefully for a long time).

The acting in this show is really well done and everyone brings their A-game. Krasinski has established himself as the best Jack Ryan (a position that Harrison Ford once held), and I love the passion and moral compass he brings to the character. Wendell Pierce is great as James Greer, and I did not find myself comparing him to James Earl Jones (who played the character in three films.) Plus they add an interesting twist to his background by writing him as someone who used to practice Islam. Abbie Cornish brings her own take to the character of Cathy Mueller, and her chemistry with John Krasinski is electric — you actually believe that they care about each other and are establishing a “no secrets” relationship. Ali Suliman is fantastic as the villain Suleiman. There were times when I was watching him on screen that I started to sympathize with him, and I would have to remind myself that he was the villain. One of the scenes (with Suliman and Krasinski) in this first episode that is so well-acted that it could go down as having one of the best bits of dialogue on TV. Suliman also has great chemistry with his on-screen wife (played by Dina Shihabi). Their chemistry is something to really watch and they deliver in every scene they are in together. What you see at first is a relationship of pure love but then turns out to be one that cannot survive. I really can’t say enough about the acting, it’s just fantastic. 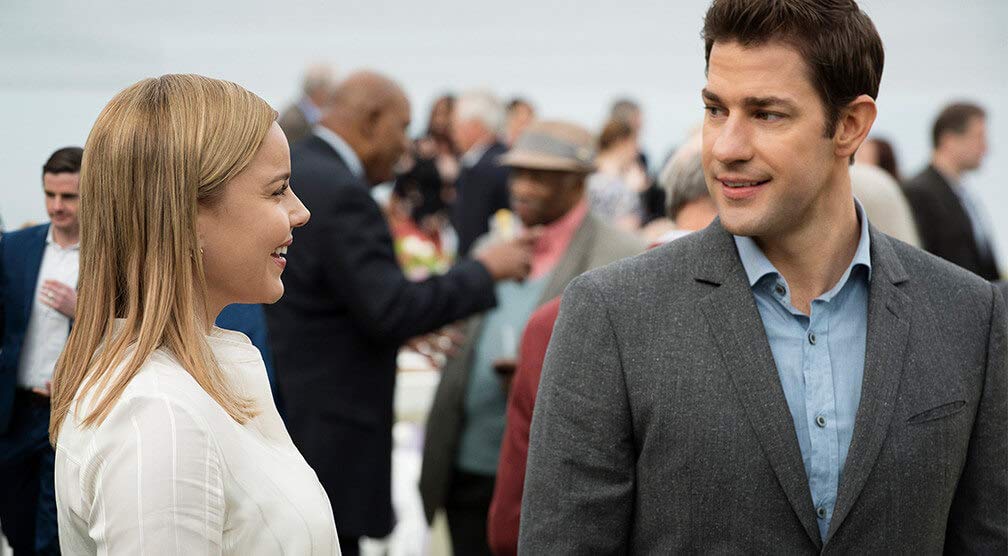 When it comes to writing, this show also delivers. The writing team of Daria Polatin, Patrick Aison, Nazrin Choudhury, Nolan Dunbar, Annie Jacobsen and Stephen Kronish present a story that is compelling and moves at a break-neck speed. I could tell that the writers really cared about these characters, and wrote their hearts out to deliver one of the best seasons on television that I have watched in a while. Through the use of flashbacks, I found myself starting to sympathize with Suleiman and his brother, only to be reminded of how bad Suleiman is. I absolutely loved the scenes between the two of them. Their dialogue is so well-written that it just seems to come off as a natural conversation between them. The terrorist plot for the season is so well conceived that I found myself trying to figure out which of Clancy’s books they were taken from. I noticed that one of the attacks was loosely based on one from Rainbow Six. It also felt like the writers were teasing the debut of John Clark who becomes Ryan’s friend and the future leader of Rainbow (a counter-terrorism organization). There are so many Easter eggs in this show that I might have missed a few and will have to watch it again to catch more of them. That goes to show you how well the writing is.

While I did enjoy watching this show and I am excited for the next season, I did have a few issues with this series. The first issue that I had was that there was no clear book adaptation for the season. Now I am not expecting them to retell the story from The Hunt For Red October, but I was expecting a story like Red Rabbit or The Sum of All Fears to be adapted. Later down the line they could do Debt of Honor or Executive Orders (which sees Ryan working at the White House as National Security Adviser. My second issue is that the secondary characters never really got their chance to shine. I keep going back to Matice who was my favorite secondary character this season and I wanted to know more about him and for them to finally reveal him as John Clark. I feel that the writing team wasted an opportunity to introduce Clark and Ding Chavez. As many book readers know, Clark and Chavez are very close with Jack and become instrumental in helping him rid the world of the threats they face. My third issue is that the season was a little too short for me. I did enjoy the eight episode season but I really feel like it could have benefited from twelve episodes. The eighth episode wraps things up a little too quickly for me. I wanted to see more of the relationship between Jack and Cathy and the relationship between Jack and Greer.

With all of that being said, I still enjoyed watching this season and I did have fun live tweeting while watching it. This show is one of the better shows out there and whether you are or aren’t a fan of Tom Clancy, there is still a lot to be enjoyed.