It’s no exaggeration that the Metal Gear Solid series is one of the most influential franchises to ever exist. We’re not far from the 20th anniversary of the game that brought the series both prestige and mainstream acclaim, which also makes this the perfect time to re-examine it. It’s hard to imagine a world without Hideo Kojima’s brainchild, and even twenty years later it’s very easy to see why Metal Gear Solid is so beloved. When you boil the game down to its prime elements: Metal Gear Solid is about one man infiltrating an island that’s filled to the brim with danger, and he has to face more than he bargained for. Love, deception, betrayal, and harsh truths about himself are all thematic elements in this game. Layer on top of that cutting edge gameplay, an action movie-esque environment, and a self-aware wit, and you get a fairly timeless recipe. 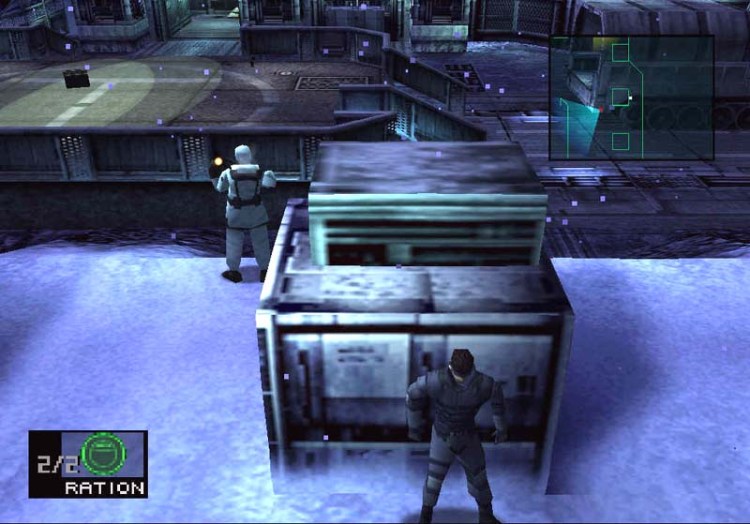 To recap Metal Gear Solid’s premise: rogue members of the spec ops group FOXHOUND and the genetically enhanced “Genome Soldiers” seize control of a nuclear disposal facility on the isolated island of Shadow Moses, threatening to launch a nuke if their demands are not met. Playing as retired FOXHOUND agent Solid Snake, you’re sent to rescue hostages, and stop the insurrection led by the terrorist leader Liquid Snake. The game immediately throws you into the deep end of the pool by establishing the high stakes at play. You also quickly figure out that the biggest dangers in the game aren’t just the enemies you’re fighting, but the government for whom you work.

The plot of Metal Gear Solid gets a lot of mileage out of testing Snake’s resolve — both toward his mission (considering he’s a tool to be discarded), and whether those orders are worth carrying out when his superiors continually prove to be corrupt. The game doesn’t reserve hard questions for Snake or his allies; and while Metal Gear Solid wasn’t the first game in the series to have three dimensional characters, there’s a reason why the villains of this game are so well-regarded. They were given plenty of reasons for their rebellion simply beyond providing faces for Snake to punch. Reasons ranging from simple sadism, to a desire for belonging, or wanting to escape the past. An attempt to make sympathetic villains isn’t original, but it helped provide more viewpoints than that of Snake for the player to enjoy the story, especially when executed well.

Metal Gear Solid didn’t become as famous as it did solely for its story, however. It also had exciting and provocative gameplay for its time. We’ve discussed plenty of PlayStation One games on this column with varying degrees of praise and criticism. Metal Gear Solid, however, is a game that’s very difficult to criticize. Compared to its contemporaries, the game boasted a very player-friendly control scheme — between the use of the analog stick and the game’s very menu-light method of switching Snake’s equipment and weapons (especially compared to later games in the series). Aside from the Codec Screen, there isn’t much of the menu screen hopping that the sequels (particularly Metal Gear Solid 3: Snake Eater) fell into. It very much lives up to its “Tactical Espionage Action” slogan which was emblazoned on the cover. There’s a real effort made to have the player invested in Snake’s sneaking mission, as well as making the stealth entertaining to play with a wide variety of tricks to bypass and fool enemies. While the game is limited by the technology of the time and doesn’t have the more advanced combat that the later sequels have, Metal Gear Solid does boast a very exciting combat system when fisticuffs are required. It doesn’t hurt that the game has easily some of the most memorable and varied boss fights in gaming. Between the duel with Revolver Ocelot, the one-on-one brawl with the Cyborg Ninja, the sniping fight with Sniper Wolf, and the first 3-D fight with Metal Gear, there were some moments that still feel epic — even after two decades of graphical leaps.

It’s also worth noting that, as short as the game is by modern standards, it boasts an astonishing level of craft. The environments even as seemingly quaint because of the intense graphical gap of twenty years, are extremely detailed and show really well just how huge Shadow Moses Island is. From the Alaskan tundra, to the Tank Hanger, to the Nuclear Warhead Storage Building and Metal Gear’s hanger, no environment is the same. Metal Gear Solid was very expansive for its time and the game does not hesitate to remind you of its scale. It’s also filled with the Easter eggs and wit that made the series well before it became a living meme with its sequel. Though having an entire boss fight being decided by your use of the second controller port is still a pretty difficult to top as far as shattering the fourth wall goes. That it’s all anchored by an expertly tailored story and gameplay makes it all the more enjoyable to replay so many years later.