In The Brave New World #1, the United States has suffered multiple nuclear weapon attacks and has been divided into multiple “nation states.” 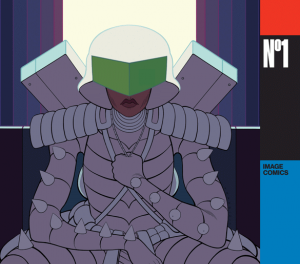 In The Brave New World #1, the United States has suffered multiple nuclear weapon attacks and has been divided into multiple “nation states.” In the nation state of The New California, the police have been called guardians and they are reality television stars. During the program, viewers can decide on whether or not suspects will live or die by voting using their smart phones. While this is going on, the television network is hit by a cyber attack and the suspect has fled. What does this new world have to offer?

The story by Ales Kot, is one of despair. Kot also juggles a few subplots that are threaded throughout the book. The main plot is pretty straight forward and reminded me of The Hunger Games. We are shown that society thrives on the violence that they are shown on tv. The main subplot involves the hacker who launched the cyber attack on the network and it shows his struggles in life.

The art in this book by Thadd and Heather Moore is beautiful. The characters are designed really well and the backgrounds look great. When it comes to the colors, they are bright and vibrant. They fit the world well. The Moores have done a great job of world building through their art.

The biggest issue I have with this book is the story. It just feels all over the place and I had such a hard time focusing on it. There is just too much going on and it shows. If it was just the one story and one or two subplots it would be fine but it feels like there is too much to swallow.

3 Reality Tv Stars out of 5