Platform: PC (From the Devil May Cry HD Collection)

Welcome back to ‘Ghosts of Games Past’, friends! This week we’ll be covering another game from the as-yet endless array of games there are to play on consoles, handheld, and PCs alike. Today, we’re focusing on Devil May Cry 3.

Devil May Cry 3 may very well be one of the strangest games Capcom has ever produced. Which is no mean feat for a publisher that cut its teeth on Mega Man and Resident Evil. Released on February 17th, 2005 for the PS2, it was part of a wave of action and combo-heavy games like God of War that would help define that decade of gaming. However, unlike a lot of the anti-hero protagonists of that time: Dante was a relatively angst-free protagonist who treated events around him in a light-hearted fashion more than anything else — which helped to inform what kind of series Devil May Cry would be. While the series is set to return after a failed reboot with Devil May Cry 5, we’re here to talk about arguably the best game in the series: Devil May Cry 3: Dante’s Awakening. 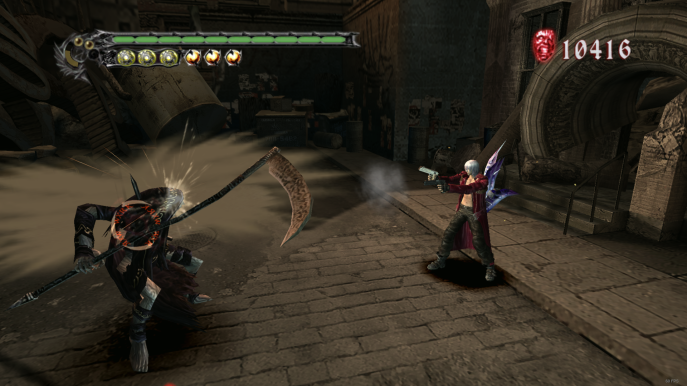 Devil May Cry 3 is a prequel to the events of the original game focusing on a (somehow) younger and cockier Dante who’s invited to fight his way up the demonic tower the Temen-Ni Gru by his twin brother Vergil and the mysterious Arkham. As with any Devil May Cry game: the story is loose and mostly an excuse to unleash mayhem. Though it is still fun to watch the interplay between a younger Dante and his brother who he so clearly defines himself against.

The real meat of the game is the glorious and action-packed gameplay. While the original Devil May Cry had a static camera angle which made fights rather irritating, Devil May Cry 3 makes it much easier to be able to fight with the expanded camera angles. You’re also given a great deal of choice in how you choose to fight. As is tradition with this series, you’re given an ever-expanding arsenal of weapons to use. However, this chapter in the Devil May Cry saga also provides players with an introduction to various combat styles for Dante to use. This infuses a great deal of consideration into how you want to battle your way through this game. The “Trickster” style relies on agility and dodging to operate, “Swordmaster” gives you more attacks, and so forth.

Granted, the game is a product of its time; so, it doesn’t have all the things we’ve come to rely upon like an immediately available mini-map. All of your equipment and styles are only swappable before you start a mission or at specific statues. Not to mention early 2000’s collision detection was always a pain in the butt.

Now with all of that being said: Devil May Cry 3 is, for all its flaws, still a fantastic game and it does hold up quite well against its sequels. The array of available weapons and styles give you a great degree of control over how you choose to approach the game. And while the cutscenes are… choppy by 2018 standards, it’s still fantastic art design. All things considered, it’s a game that’s worth revisiting. Of course, we’d like to hear what you think of Devil May Cry 3. As always, you can leave a comment below or even hit us up on Twitter to offer your thoughts on this game.