This week is a good week to be a Star Wars comics fan. Not just one but two good books came out that will keep us busy for a while. Darth Vader fans get a book that looks at how the Mon Calamari were brought into the fray and Thrawn fans get a step closer at the man who will eventually become grand admiral.

Let’s look at each 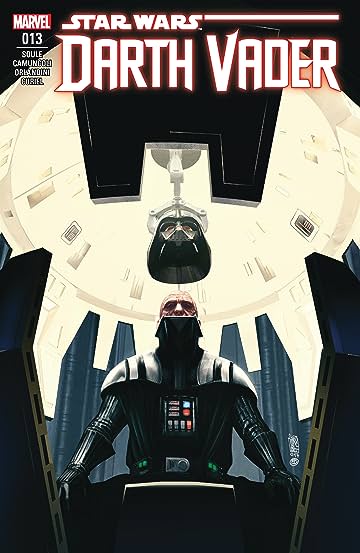 This issue is a good jumping on point for new readers as Charles Soule has been deftly filling in the gap between the end of Revenge of the Sith and A New Hope. Even if you missed the last 12 issues (what are you waiting for? READ THEM NOW!), this issue puts you right at the beginning of Darth Vader’s mission to Mon Cala as the Emperor sets his sights on conquering the planet. I really enjoyed the slow burn as Soule introduces the king as well as Gial Ackbar, before he became Admiral. The story is tense as the Empire ‘negotiates’ a treaty to get the materials it needs to build its weapons and when a shuttle is sabotaged, things gets more tense as Vader and Grand Moff Tarkin, as well as a few Inquisitors to boot, are brought in. The best part of the book is the dialogue between Ackbar and Vader as they meet for the first time. Other parts that fans will enjoy will be the opening duel between Vader and Obi Wan in a flashback as well as a few other cameos throughout. The only knock I have against the book is that Giuseppe Camuncoli’s work here to me, was just ok. I wasn’t a fan of how his proportions worked with his scaling to Vader. Sometimes Vader appeared ‘too skinny’ and at others it was just right. Otherwise, Camuncoli has done a decent job bringing Soule’s words to life.

This book has come out on time as Star Wars fans have probably just watched the last episode of Rebels. It’s hard to believe that this character has been around for nearly 30 years and nothing has been told about his backstory until now. In the first issue, we saw how he was found and brought in under Palpatine’s blessing even though Palpatine was breeding a xenophobic environment. In this issue we find out how ruthless the xenophobes as we see an early mission of Thrawn goes awry while trying to bring in a derelict ship with tibanna gas aboard. Jody Houser does an excellent job of showing how Thrawn in many ways is an opposite of Darth Vader even in his early days. He lives up to his persona as someone who calculates every move that others make to make situations advantageous to himself and Ensign Vanto, his second.  This issue is full of double crosses as Thrawn has to deal with not only his fellow Imperial Navy soldiers but pirates as well and none of them take to him being an alien. Check out the one scene in which a few captives, in a classic movie trope, thinks when no one is watching spills all of the beans about their operation and Thrawn gets everything he needs. Furthermore, hardly any blood is shed. Also, at the end Vanto gets an offer that he can’t refuse…which way do you think he will go? As far as the art, Luke Ross’ work here is pretty solid here especially capturing nuances and expressions that really sells this story. If you are a Thrawn fan and want to see him in his early days, this is a can’t miss book.