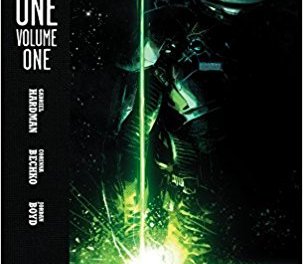 Oh, hey, the “Earth One” line is back. We hit a weird phase with these, where after three Superman volumes, two Batmans, two Teen Titans, and a Wonder Woman, the line sort of went on an unspecified pause. Indeed, it seemed like there was an open question as to why DC Comics is running this line, since perfectly cromulent origin stories exist in the mainstream titles. Geoff Johns’ Green Lantern: Secret Origin is much more in line with the classic version of the Hal Jordan story, so the announcement of Hardman and Bechko’s spin seemed…misplaced, at best.

Funny thing is, this isn’t a bad comic at all.

Green Lantern: Earth One is certainly one of the more creative re-imaginings of a Silver Age story, since Superman, Batman, and Wonder Woman‘s Earth One stories are all more or less congruent with the classic stories, though with some minor tweaks and cinematic restylings for the mass market. Green Lantern still follows a baseline formula for Hal Jordan, though updating things to be in a near-future of present-day Earth.

GL:EO reads almost at times like an Alien story, and I had to check that Hardman and Bechko hadn’t done an Alien comic for Dark Horse already. That’s only half-true: Hardman is working on the upcoming Alien: Dust to Dust, and Bechko wrote the Aliens/Vampirella crossover. It’s unsurprising, though: the comic opens in a bleak, off-world asteroid exploration setting. Hal Jordan is no longer a washed-out Air Force test pilot for Ferris Aircraft. Now he’s a washed-out NASA pilot working for Ferris Intergalactic, exploring far-off asteroids for profitable ores. Those explorations lead to the accidental discovery of a wrecked spaceship, a dead alien, and a mysterious ring and battery. While that discovery leads to an obvious larger adventure, Hardman’s dark, shadowed pallette portays the creepy style of space discovery, very effectively evocative of sci-fi horror.

From there, though, the story moves into a bit more of a traditional Green Lantern story, albeit with another new familiar spin. While Hal Jordan finds himself drawn into an intergalactic war with a classic enemy, the take on the Green Lantern mythos is rewritten in a Star Wars style. I’m not saying this is directly lifted from The Force Awakens, but rather, the familar tones are there: there’s an ancient, near-mystical order which is long fallen, and Hal Jordan is drawn into a larger mystery of where it went and how to bring it back. Again, this ability to draw this kind of parallel is unsurprising, as Hardman and Bechko worked on Star Wars: Legacy Volume II for Dark Horse Comics. That series, in retrospect, feels like a strong precursor for The Force Awakens with their character of Ania Solo having early elements of Rey and Jyn Erso. Legacy was cut far too short, and the husband-wife creators left many of its mysteries unfinished. Green Lantern: Earth One feels like an opportunity to give that series a spiritual successor.

In the end, Green Lantern: Earth One isn’t a rehash of the traditional Hal Jordan story, but neither does it abandon its roots. It’s fairly close to an “Elseworlds” spin on the story, taking a familar story and giving it an alien overlay. This may put it at the forefront of the Earth One line, believe it or not: it’s high quality, keeps to its roots, but still allows itself to stand free of repetition.

Rating: Four rings out of five.