Break out your pencils, rulebooks, dice, and your favorite deodorant: Old Spice has just unveiled the Gentleman class for use in your next game of Dungeons and Dragons. Being a fan of both D&D (as well as smelling nice), I begged for the opportunity to give this new class a thorough breakdown. Let’s do this.

The first thing I notice is this excerpt from the flavor text: “These travelers are sometimes called Old Spice Gentlemen, other times Old Spice Gentle-ladies”. Good on ya for being gender-inclusive, Old Spice; especially for a company that is so male-oriented!

The next section talks about the Gentleman’s role in the party. It seems to fulfill the same party role as the bard (obviously, the best class in the game). I hope that further reading will help differentiate the two classes. It’s also interesting to note that the Gentlemen can be of any alignment, whereas the Bard must be chaotic-something.

What’s this? A d10 hit die?! Oh man, this class is already starting to look good. There’s a pretty good spread of class skills and skill ranks per level (5 + Int Modifier isn’t quite as good as a bard, but it’s definitely more than the more martial classes). Proficiency in light armor is pretty much expected, as is proficiency in all simple and martial weapons. Now, this section also states that the Gentleman is “probably” proficient in laser beam-based weapons if they’re available. Regrettably, I don’t think any splatbooks from 3.5e have any laser weapons, but if your GM is running a homebrew setting or a full-scale Spelljammer conversion, that proficiency might come in handy!

Okay, hold the phone: when wearing your class armor (a fancy suit, obviously), you get an AC of 10 + Dex Mod + CHARISMA MOD?! By St. Cuthbert, this class is starting to look better and better the further I read. Let’s move onto abilities. 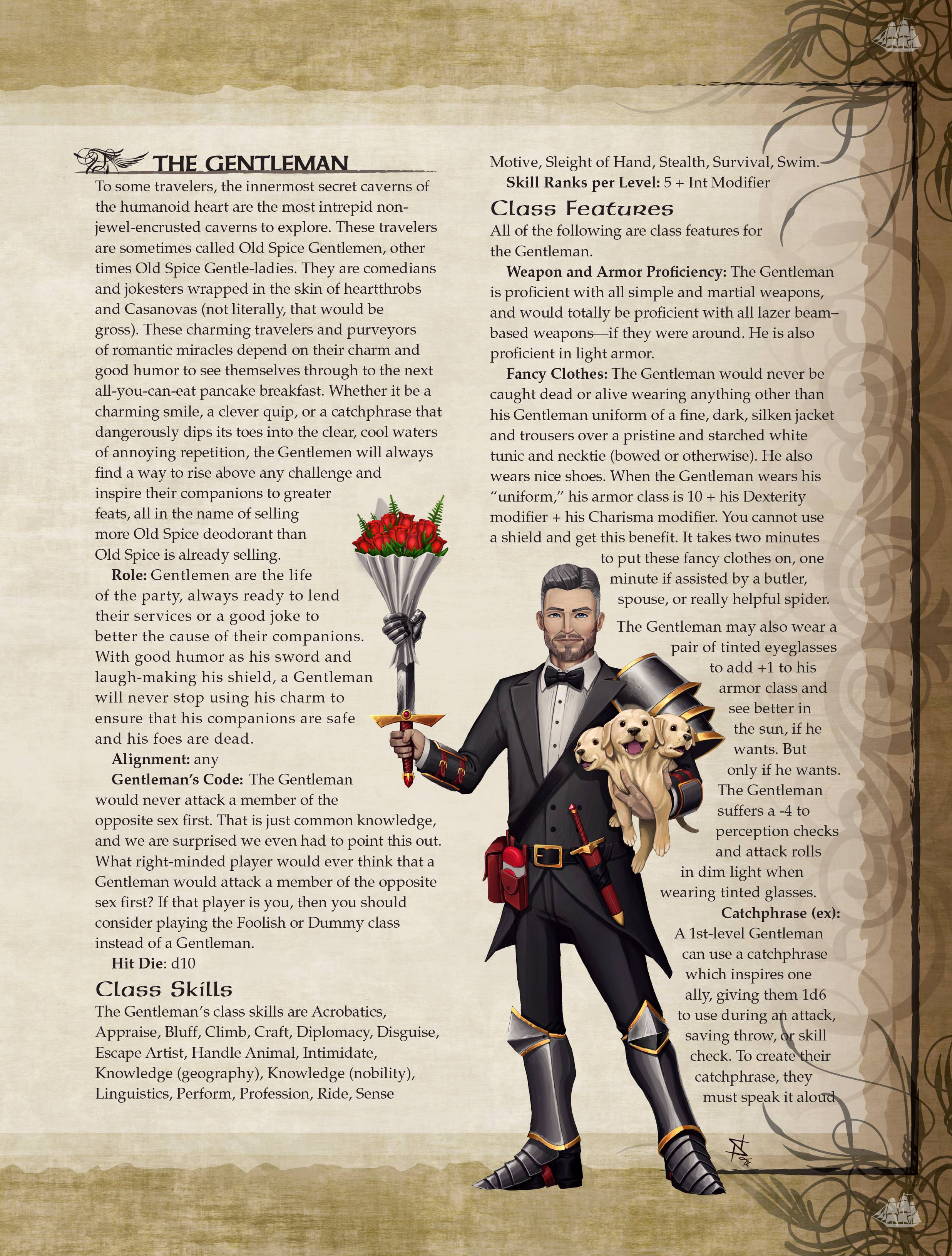 The Catchphrase ability is pretty awesome: inspire an ally and give them 1d6 to use during an attack, saving throw, or skill check. Every four levels, you can add another d6 to this inspiration. The only thing I wish the authors had included was clarification on whether or not you can split these extra d6s among other allies. That might be a little too overpowered, but I’d still like to see this addressed in a future errata. Punchline is a nice little offensive ability that scales nicely over time.

Fifth level is where things start to look really exciting! I’m on a Horse lets you summon a horse directly beneath you and immediately dash 30ft in any direction without provoking an attack of opportunity. I can see this being extremely useful in combat situations as well as making ranger players jealous, both of which I am a fan of doing. At 6th level, you get I’d Take a Bullet for You, Man which acts as a nice buffer for your allies who are at risk of taking massive amounts of damage. Note: the rules state that the Gentleman may use this ability from ANY location in SIGHT, not just within movement distance!

Moving right along, you nab a minor healing ability at 7th level which doesn’t do much and a bump to your charisma checks as long as you spend 30 minutes a day curling heavy objects (maybe the authors are trying to emulate the wizard’s spellbook time requirements?). And then at 11th level, you get to tick off all the druid players in your group by turning into a wolf! This sounds pretty awesome at first glance, but you can’t come out of wolf form until you’re down to zero hit points. Not that great of an ability, given that some of the other core classes can do this multiple times a day and at will, but possibly situational useful. Matrimony, unlocked at level 15….honestly kind of sucks. It doesn’t bring anything to the game except a new NPC, which you then have to keep alive or risk losing FIVE LEVELS for the remainder of the session. Not my cup of tea, but hey, if it works for you, go for it.

17th level lets you get a haircut and level up everyone ELSE in the party by a single level…but not yourself? That seems like a bit of an oversight. Everyone else at the table will love it, but there’s no benefit in it for you, so what’s the point, really? And lastly, at 20th level, your Gentleman is essentially removed from the game, but can communicate with the GM to make things explode at will. Given how game-breaking this ability is and the fact that the effectiveness of the explosion is up to the GM’s discretion, I just can’t see it being useful.

In conclusion, the Gentleman class starts off strong, but plateaus quickly and isn’t really worth anything past level 7. My recommendation would be to start off at level 1 with this class (because that d10 hit die and AC bonus is really nice!) and then multiclass into a regular bard anytime after fifth level. Your character will be less squishy at lower levels, but you’re not going to spend the second half of your campaign bored out of your mind.

Still, if you’re up for trying this class, you can download the character info from here.

Three and a half editions out of five

Jordan has been writing for twenty years, gaming for a little less than that, working in food service for nine years, and working on starting his own tabletop game design and publishing company for two. Based out of Manassas, VA, where he waits on tables and cooks for a living and lives with his wife, Jennifer.
Follow Pop Culture Uncovered on WordPress.com