Where are you from originally, or where do you reside currently? I am originally from White Plains, NY. I currently reside in Upper Marlboro, MD

How long have you been cosplaying?

I’ve been cosplaying for 3 years

What characters have you cosplayed?

I’ve cosplayed as a Blue lantern, A Jedi, A combination Blue Lantern/Jedi, 3 versions of Mr. Terrific, And about 7 different versions of Sam Wilson’s Falcon and Captain America characters.

What inspired you to start cosplaying?

Having seen numerous cosplayers at comic cons, I was always very impressed by what I saw, and the creativity that went into it. I was somewhat curious about getting into it myself, but it seemed like something that was out of reach for me, despite the fact that I was a face and body artist who specialized in comic book masks. My daughter told me that she interested in making her own superhero costume and was asking me for ideas. That got me thinking again about what I’d like to cosplay, and I started looking at different characters, and settled on Mr. Terrific, as he didn’t have a spandex suit, but a leather jacket and pants that looked like it could be worn in ‘real life’. I went about finding someone who could make the jacket, and once I completed the cosplay and wore it in public at Awesome Con in 2015, I was hooked! 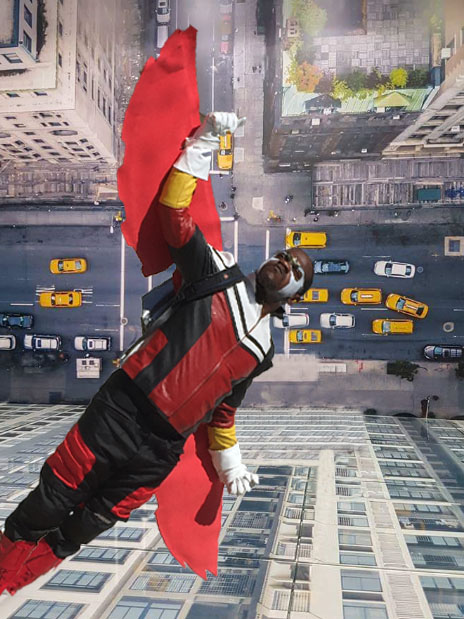 What do you do when you are not cosplaying?

Besides my regular 9-5 job, I’m also a professional face and body artist. When I’m not working, I like to go bowling, fishing and spending time with my wife and daughters.

What is the best advice you would give someone new to cosplaying?

First, don’t get discouraged by people telling you what you can and can’t cosplay. It’s not up to them. It’s up to YOU. Don’t let anyone else decide what you should and shouldn’t do. Don’t let anyone tell you what costume is off limits for you. As long as you’re not coloring your face to look like another person’s race, the sky’s the limit!
Second, be careful about the people you surround yourself with. This is advice for life itself, not just cosplay. Like any pastime, there are people you will meet who are good influences and those who are not. Surround yourself with fellow cosplayers who have a positive attitude, and are encouraging. You will have more fun with those friends, and they will help you become a better cosplayer and a better person. You will also avoid a lot of the extra “drama” that others experience from being around those who are more superficial, and self-centered.
Third, and most important, HAVE FUN WITH IT! There are too many people who are cosplaying because they want to become famous. They’re more obsessed with how many “likes” and followers they have, than the “play” aspect of it. When you are in it, only to chase fame, and don’t achieve it, then you will feel unfulfilled, and discouraged. If you cosplay because you enjoy getting into costume and going to shows, meeting people and taking pictures, then it’ll never get old. Remember to have fun. You’re in a costume. This is not a time to be serious.

Why do you feel that #28DaysofBlackCosplay is important?

#28DaysofBlackCosplay is important because Cosplayers of Color are still largely ignored by the mainstream audience. We’re largely ignored or ostracized by other cosplayers. We’re routinely overlooked by photographers and publications who prefer lighter skinned people to spotlight. More often than not, a random “Top 10 Cosplayers” article will be almost entirely made up of white (or light skinned) cosplayers (most of them women), with MAYBE 1 or 2 black or darker skinned latino cosplayers thrown in “for diversity”. I’ve met countless people who were surprised that there were black cosplayers, because they had never seen any online. We’re out there. We’re at the same cons as everyone else. We’re just as passionate. WE EXIST. We’re just not of the “default race” that society is used to focusing on And as a result, we’re not seen on the same level as everyone else. That’s where #28DaysofBlackCosplay comes in. This is an opportunity to celebrate our cosplays and show the world, and encourage each other, that WE DO EXIST. That we’re just as talented. That we are just as passionate. It’s a way to get our names out in the public eye, and even out there amongst the other cosplayers of color. #28DaysofBlackCosplay is as much for the general public to see who we are and how deep our roster is, as it is for the roster itself. Many Black cosplayers don’t realize how many of us there are. We often feel alone in a sea of white cosplayers, many of whom resent our participation in “their” hobby. #28DaysofBlackCosplay makes it clear to Cosplayers of Color, that this is OUR hobby too. And more importantly that we are not alone. That there is a multitude of us worldwide. And that there is a level of encouragement and support available that should reassure everyone that they are not alone. 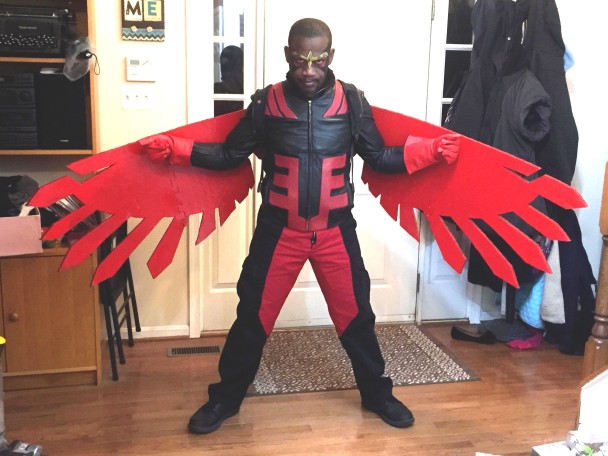 What is one thing the PoC cosplay community can do better when it comes to dealing with each other as well as non PoCs?

In dealing with each other The PoC cosplay community can be more encouraging toward each other. Cosplayers of Color as a separate community came about because we were not accepted by other cosplayers, and we needed a support base where we could support and encourage each other while still existing in the larger framework of cosplayers out there. We do ourselves a disservice, if when we come together as PoC, we still exhibit the same clique-isms and divisions (how many followers do you have, did you make your cosplay or buy it from a store) that drove us out of the larger community in the first place. We are extremely quick to find reasons to drag each other on social media, but nowhere near as fast to put that effort into encouraging and supporting each other. As for dealing with non PoCs, we just need to be ourselves. And be unapologetic about it. Do not let a non PoC tell you what you can and can’t cosplay (i.e. Batman isn’t BLACK). As one wise cosplayer once put it, “You can’t get make-believe WRONG”.

We also, regardless of color, need to stand up to harassment of other cosplayers. The theme “Cosplay is not Consent” isn’t just a catch-phrase. It’s a real problem. It’s a real issue. And cosplayers as a group, whether you’re a PoC or not, have a responsibility to speak out and ACT out against it. Harassment of ANY type should NEVER be tolerated. And we as a community should be extremely vocal and if necessary physically forceful about eliminating it from cons, social media and anywhere else where people are being harassed sexually, racially, socially, or in ANY other manner.